Example above is solved using computer with TORA.
Enter the values λ = 12
μ = 18
No. of server = 1
The input screen is shown in Figure. 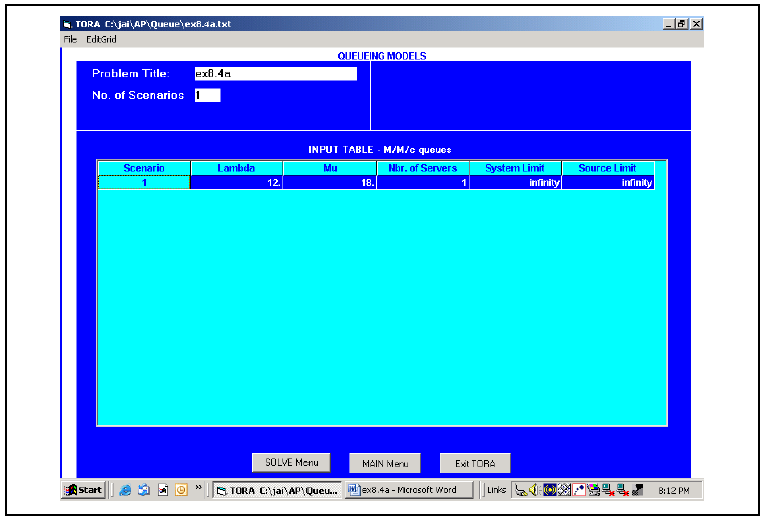 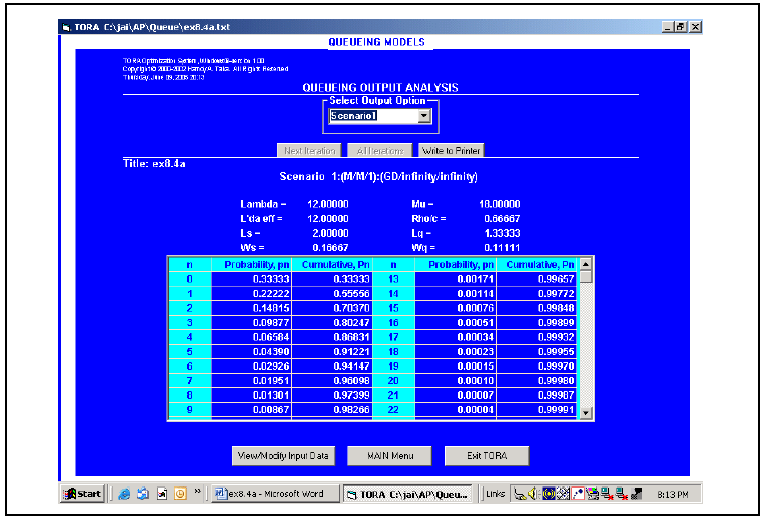 In the same problem, to determine the probability that there are 2 trucks in the system, we use the formula, 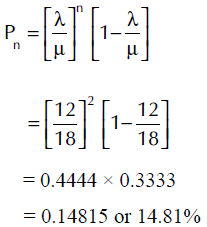 This can also be read in the output screen for n=2 the probability Pn = 0.14815, similarly, the probabilities for different values of n can be directly read.

Example: A TV repairman finds that the time spent on his jobs has a exponential distribution with mean 30 minutes. If he repairs TV sets in the order in which they come in, and if the arrivals follow approximately Poisson distribution with an average rate of 10 per 8 hour day, what is the repairman's expected idle time each day? How many jobs are ahead of the average with the set just brought in?

(i) The Probability for the repairman to be idle is, 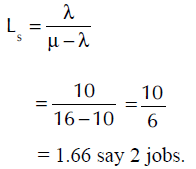 Example : Auto car service provides a single channel water wash service. The incoming arrivals occur at the rate of 4 cars per hour and the mean service rate is 8 cars per hour. Assume that arrivals follow a Poisson distribution and the service rate follows an exponential probability distribution. Determine the following measures of performance:

(a) Average time that a car waits for water - wash to begin,

(b) Average time a car spends in the system,

(c) Average number of cars in the system,

Arrivals at a telephone booth are considered to be Poisson

Example : Arrivals at a telephone booth are considered to be Poisson distributed with an average time of 10 minutes between one arrival and the next. The length of phone call is assumed to be distributed exponentially, with mean 3 minutes.

(ii) The installation of second booth will be justified if the arrival rate is more than the waiting time.
Expected waiting time in the queue will be,

(iii) Average number of units in the system is given by, 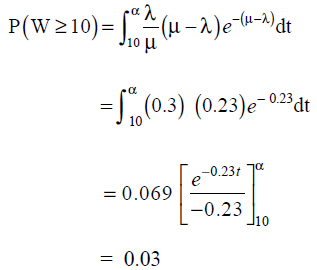 This shows that 3 percent of the arrivals on an average will have to wait for 10 minutes or more before they can use the phone.

Example : A bank has decided to open a single server drive-in banking facility at its main branch office. It is estimated that 20 customers arrive each hour on an average. The time required to serve a customer is 3 minutes on an average. Assume that arrivals follow a Poisson distribution and the service rate follows an exponential probability distribution.

The bank manager is interested in knowing the following:

(a) What will be the average waiting time of a customer to get the service?
(b) The proportion of time that the system will be idle.
(c) The space required to accommodate all the arrivals, on an average, the space taken by each car is 10 feet that is waiting for service.

(b) The proportion of time that the system will be idle,

(c ) Average number of customers waiting in the queue,

Example: In a Bank, customers arrive to deposit cash to a single counter server every 15 minutes. The bank staff on an average takes 10 minutes to serve a customer. The manager of the bank noticed that on an average at least one customer was waiting at the counter.

To eliminate the customer waiting time, the manager provided an automatic currency counting machine to the staff. This decreased the service time to 5 minutes on an average to every customer. Determine whether this rate of service will satisfy the manager's interest. Also use computer with TORA for solving the problem.

Since no customers are standing in the queue the manager's interest is satisfied. The problem is worked out using TORA. Enter the values as shown in the input screen below in Figure. 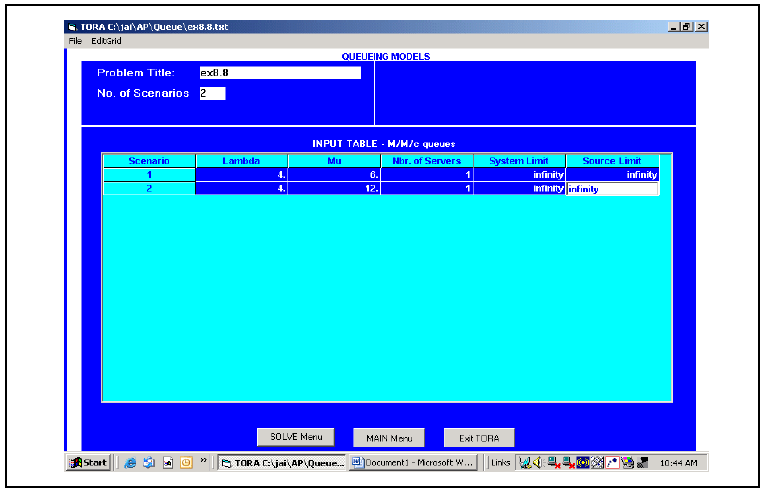 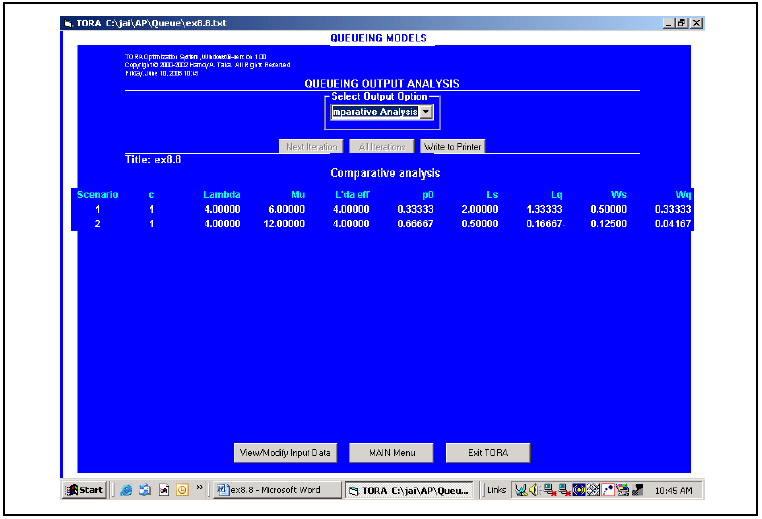 Example: 12 counters are available in a computerized railway reservation system. The arrival rate during peak hours is 90 customers per hour. It takes 5 minutes to serve a customer on an average. Assume that the arrivals joining in a queue will not be jockeying (i.e., move to another queue). How many counters have to be opened if the customers need not to wait for more than 15 minutes?

Solution: The problem is to be solved as one system comprising of 'n' number of single server queuing model. 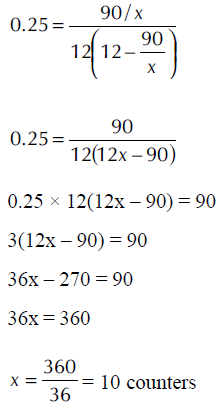 Hence, 10 counters are required so that an average arrival will wait less than 15 minutes.

Example: In a single pump petrol station, vehicles arrive at the rate of 20 customers per hour and petrol filling takes 2 minutes on an average. Assume the arrival rate is Poisson probability distribution and service rate is exponentially distributed, determine 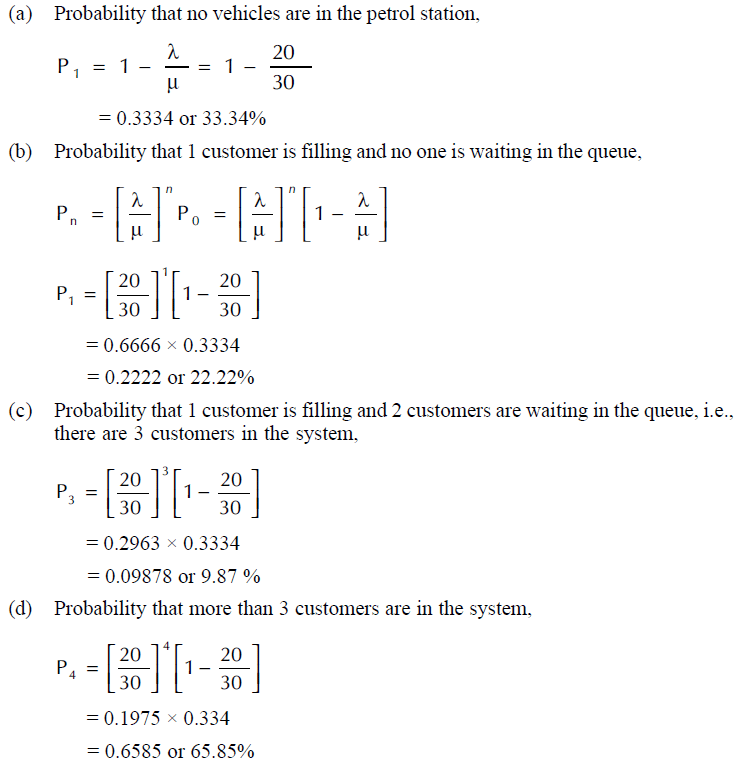 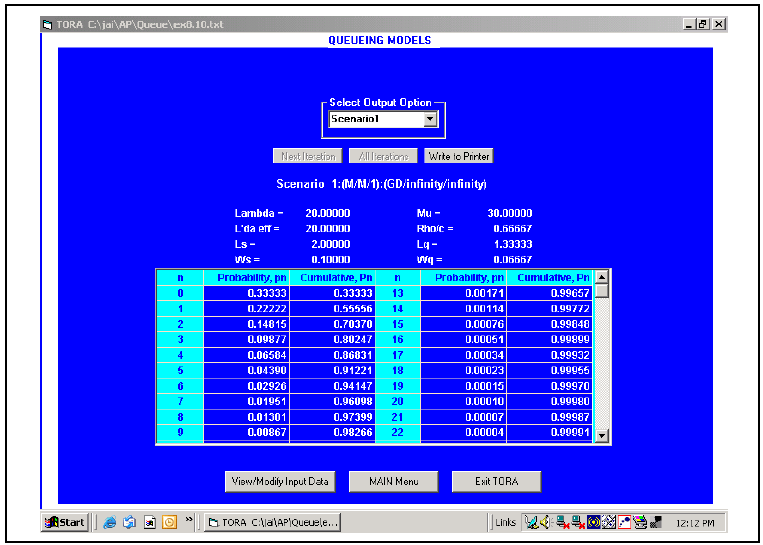