To remain competitive in this business world it is important for organizations to attract, hire and retain a diverse workforce. The concept of blind hiring is getting recognized with increased focus on workforce diversity. Recent study on Blind Hiring: Concept, Challenges and Competence, mentions that nearly 60 per cent of India Inc employers listed workplace diversity as the primary criteria of this year. 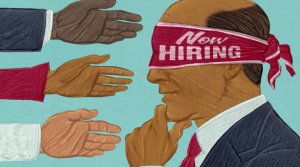 According to the study, 70 per cent of the employers across sectors mention that there is a lack of workforce diversity within organizations, over 55 per cent quotes that the gap was mostly in terms of gender diversity. Top IT giants like Top companies such as Google, Facebook and Apple have goals to improve gender and ethnic diversity in their organizations.

What is blind hiring? Many software companies are removing resume details such as name, address, college/university, graduation year, educational background and other details which can reveal the candidates sex, race, age, ethnicity and socio-economic background. They consider only persons skills as main criteria as candidates First impression. It was known fact that where recruiter/ hiring managers typically spend less than five minutes to review a resume. To remove such kind of biases on candidate information such as gender, ethnicity, age and other such non-job specific elements recruiters focusing on skills that will matter in job performance. The study also mentioned that nearly 60 per cent employers found skill gaps in their workforce, so it is important to have practices like blind hiring to eliminate the insignificant elements in the resume and focus on just skill sets. The study concluded that while 58 per cent employers think improved gender diversity is the biggest advantage of blind hiring, 30 per cent said it helps improve ethnic diversity. Nearly 12 per cent employers said the process helps in improving the hiring scenario by ignoring the inconsequential elements in a resume.