STRATEGIC ALLIANCES BETWEEN HOTELS AND RESTAURANTS - Hotel Management and Operations

One of the first branded restaurant concepts to operate in hotels was probably Trader Vic’s, founded by Victor Bergen in 1937. By 1949 Western Hotels (which became Westin) integrated Trader Vic’s into 13 hotel-based restaurants in nine countries (Withiam, 1995a, 14). Other chains also hosted the restaurants and today, 60 years later, Trader Vic’s still operates in such hotels as the Beverly Hilton, the Palmer House (Chicago), the Marriott Royal Garden Riverside (Bangkok), and the New Otani properties in Tokyo and Singapore. Ruth’s Chris Steakhouse is another example of a popular restaurant brand operating successfully in unison with hotels, including properties operated by Hilton, Marriott, Holiday Inn, and Westin.

Despite the evidence of successful alliances between brand-name hotel and restaurant companies, most hotel companies manage their own food and beverage services, including those that also host Trader Vic’s. In part that approach reflects the long industry tradition of offering travelers both food and lodging. The Marriott Corporation is a good example of a hotel company that has used this strategy of going it alone. John Randall, Marriott senior director of food and beverage concepts, states that it is Marriott’s primary strategy to “completely manage our own F&B services to provide food, service, and quality consistency from property to property” (Hensdill, 1996).

The strategy of developing their own F&B concepts has not been successful for all hotel companies. This is evident from the frequent “reconcepting” found among hotel restaurants. A hotel might run a lounge one year, convert it into a brasserie the next year, and later decide to make it a grill. The end result is inconsistency in F&B service and quality, and therefore low sales and profits (Parseghian, 1996). Several factors may contribute to a general manager’s believing that she or he can operate the hotel’s restaurant services better than a branded restaurant company, not the least of which may be a sense of self-assurance. Some hotel general managers want to prove that they can provide a fine-dining experience whether or not a market actually exists. Others say it is because some hotel F&B operations continue to try to be all things to all people rather than providing a product that is affordable and matches customer expectations (Wolff, 1995, 24). Moreover, hotel restaurants in general have a high cost structure relative to the freestanding F&B operation down the street. Hotel restaurants have to contribute to the overall property’s expenses while the restaurant next door has little capital expense and is probably just leasing square footage.

A current trend among hotels that have reevaluated their F&B operations is to replace the formal fine-dining, white-tablecloth concept with a more casual and relaxed dining experience (Allen, 1996; Liberson, 1996). Another trend indicates that more and more hotel companies are looking to establish strategic alliances with brand-name restaurant companies. Doing this has allowed hotel companies to focus on managing the hotel itself.

A summary of the key advantages and disadvantages to consider when going with a franchised restaurant brand in your hotel are listed below (Lodging, 1995), while illustrated on the next page is a flow chart of the basic steps to take when evaluating and choosing which franchise restaurant company to use. 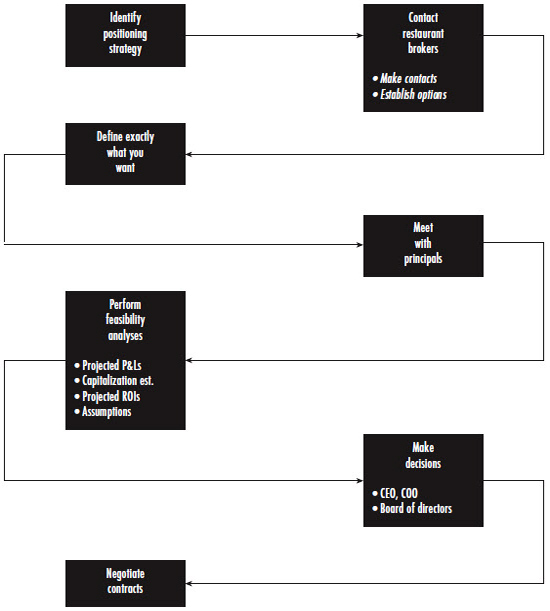 As previously noted, Bristol chose the Good Eats Grill concept over other restaurant companies because the Good Eats management was (1) flexible and (2) determined to minimize the bureaucracy to make the deal happen. In today’s competitive market, business decisions must be made quickly and accurately or else the window of opportunity may be lost. In this particular example the basic deal was struck after two executive meetings (however, it did take the lawyers a little longer). The rest of the steps in the process caught up with the decisions that were made after those two executive meetings. Such a quick decision was possible because the two companies have similar proactive management styles, the project made financial sense for both companies, the corporate cultures blended well, and the decision-makers went with their instinct.

There are four basic types of operational options that can be established between the hotel and the F&B outlet in a hotel. Those four options are

Bristol’s first choice (used for 20 of its 22 restaurant outlets) is to use its own internally developed restaurant brands. Bristol believes it has a proven track record in managing F&B operations profitably (Hotel Business, 1996). When Bristol introduced Good Eats Grill into two of its 22 hotels with food service, it showed a willingness to purchase a franchised brand, provided Bristol could maintain full control of restaurant operations and products (as long as all franchise agreements were maintained). Currently Bristol is also assessing a leasing arrangement with yet another restaurant company for a couple of Bristol’s Fairfield Inn properties. In those cases Bristol managers seem to be indicating that it would be more profitable for them to lease out square footage in the hotels versus operating the F&B outlet themselves.

We have already mentioned how the Bristol sales office uses the company’s restaurants as a selling point to assist in booking rooms, meetings, and banquets. In addition there are three other marketing concerns that need to be considered:

Competition. The primary hotel competitors for Bristol’s Houston Holiday Inn Intercontinental are a Marriott hotel (569 rooms), a Hyatt hotel (315 rooms), and a Sheraton hotel (450 rooms). As for nearby foodservice competition, Marriott uses internally developed restaurant brands (Allie’s American Grill and CK’s) along with a Pizza Hut kiosk, while the Hyatt and Sheraton offer typical hotel restaurants. Additionally, there are some limited-service hotel properties in the area that factor into the secondary market competitive analysis.

The freestanding restaurant competition in the area is negligible. There is a Kettle Restaurant nearby, but it does not pose a strong business threat to Good Eats Grill as it has a different target market. There is a Bennigan’s and T.G.I. Friday’s within three miles of the Holiday Inn, but there is no other notable restaurant competition within a two mile radius of the hotel. As it turns out, the Holiday Inn’s Good Eats Grill is popular with Marriott’s, Hyatt’s, and Sheraton’s hotel guests, and also with those hotel guests that are staying at the surrounding limited-service properties. It can be expected, then, that a guest who stays at a hotel other than the Holiday Inn, yet eats at the Good Eats Grill, may decide to stay at the Holiday Inn on return trips to Houston. The value of the strategic alliance between the hotel and the restaurant is that it establishes a unique identity for this property that sets it apart from its competition and provides a marketing edge.

Customer expectations. A primary mission statement goal of both companies is to exceed customer expectations. With the alliance of the Holiday Inn Intercontinental and Good Eats Grill, Bristol management believes the customer is pleasantly surprised with the overall product and services that the property provides. Even though the hotel and restaurant renovations were completed just recently, in July 1996, the perceived overall value of this property to the customer is already generating new corporate accounts. Bristol management believes the hotel repositioning strategy in combination with the addition of the Good Eats Grill is a major reason it is landing those new accounts.

Advertising. Bristol Hotel Company believes in a direct sales-and-marketing approach. The company therefore relies less on national promotion activities than many other firms. The Holiday Inn Intercontinental is no different in this regard. The hotel does some limited local advertising, but it relies primarily on a direct-sales approach along with making personal local contacts. Other than the signs around the property, there is no joint advertising or promotion done between the hotel and the restaurant. Good Eats Grill has four lighted signs on the property, and Bristol purchases no billboard ads for this property. There are two other Good Eats Grill restaurants located in Houston, and Good Eats Grill does do some radio promotion and rents billboards for those two restaurants.

We have shown how the correct match between a restaurant company and a hotel operator can help to reposition a hotel, increase occupancy, and increase F&B profit. We can investigate other potential financial gains by comparing a summary of the actual 1995 profit-loss statement of the Holiday Inn’s original (pre-Bristol) foodservice concept (Grand Cargo Cafe) with a conservatively estimated profit-loss statement of the Good Eats Grill for 1997 (its first year of full operation; see Table). A quick comparison of those profit-loss figures shows how establishing a strategic alliance between a hotel and restaurant can improve the overall profitability of the property. Other expenses such as franchise initiation fee ($40,000–$50,000), cost of renovation ($750,000), cost of signs ($5,000), and other miscellaneous marketing costs (grand opening, flyers), must also be factored into assessing the feasibility of converting or opening an operation prior to proceeding with a project like the one between Holiday Inn Intercontinental and Good Eats Grill.

Final analysis. Throughout this case study analysis, we emphasized how important the repositioning strategy was in turning around the Houston Holiday Inn Intercontinental.

Moreover, we focused primarily on only one part of the hotel’s repositioning strategy, that is, its strategic alignment with a particular restaurant concept. Other factors also contributed to the property’s improved performance, including new ownership and management, an influx of cash for renovations, and its new market position. Nevertheless, the alliance between Bristol and Good Eats Grill is seen as key to the property’s turnaround. The property’s previous restaurant, the Grand Cargo Cafe, was being operated as a hotel amenity rather than as a profit center. To capitalize on the restaurant’s potential, the Bristol management team recognized that a new restaurant concept was needed. After objectively evaluating their options, including their own F&B concepts, the team determined that a Good Eats Grill franchise matched Bristol’s restaurant needs for this particular property. The Bristol experience demonstrates the importance of evaluating each property on an individual basis rather than making generalizations about what will work for all hotel properties.

In conclusion, from our perspective there is no question that now and in the future we will see more hotel and restaurant companies establishing strategic alliances. It is no longer financially feasible for a hotel restaurant to be operated as just a support function to the hotel’s lodging operations. The hotel restaurant must now be viewed as a selling point to generate increased room and restaurant revenues. The hotel restaurant must be managed as its own profit center where the goal is to maximize overall property profits. For the entire property to be profitable, the restaurant concept and the hotel’s market position must complement each other. Put another way, in today’s competitive business environment the hotel restaurant cannot—and should not try to—be all things to all people. To achieve a competitive edge, hotel companies must consider operating a franchised restaurant brand or leasing space within the hotel to a restaurant company. Doing so may improve customer perception and value, and as a result increase the overall profitability of the property. 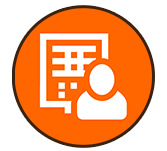