Threads can be in one of six states:

Each of these states is explained in the sections that follow. To determine the current state of a thread, simply call the getState method.

All modern desktop and server operating systems use preemptive scheduling. However, small devices such as cell phones may use cooperative scheduling. In such adevice, a thread loses control only when it calls the yield method, or it is blocked or waiting.

On a machine with multiple processors, each processor can run a thread, and you can have multiple threads run in parallel. Of course, if there are more threads than processors, the scheduler still has to do time-slicing. Always keep in mind that a runnable thread may or may not be running at any given time.(This is why the state is called “runnable” and not “running.”).

When a thread is blocked or waiting, it is temporarily inactive. It doesn’t execute any code and it consumes minimal resources. It is up to the thread scheduler to reactivate it.

The details depend on how the inactive state was reached.

the states that a thread can have and the possible transitions from one state to another. When a thread is blocked or waiting (or, of course, when it terminates), another thread will be scheduled to run. When a thread is reactivated (for example, because its timeout has expired or it has succeeded in acquiring a lock), the scheduler checks to see if it has a higher priority than the currently running threads. If so, it preempts one of the current threads and picks a new thread to run. 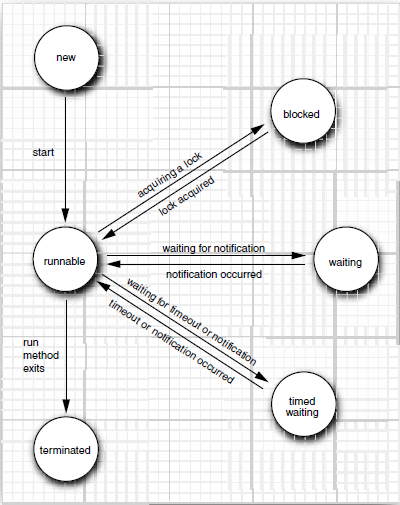 A thread is terminated for one of two reasons:

In particular, you can kill a thread by invoking its stop method. That method throws a ThreadDeath error object that kills the thread. However, the stop method is deprecated, and you should never call it in your own code.

This method is deprecated.