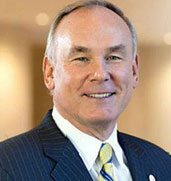 Inspiration and not desperation drives innovation...

He is a person blessed with a multi facet personality. An advisor, a strong orator, an analyst, a leader and many more traits can be used to characterize his personality. He is the man who had served many multinationals at global level and had set benchmarks for the coming generations. Rightly identified, today we are discussing about the techno friendly and life science genius “Dennis M Nally”.

His perilous charm and dynamic personality followed by ardent attitude towards work makes him a senator having the ability to guide multinationals in their strategic decisions and accomplish their goals. He has an extensive experience serving the large multinational clients in different fields like technology and life sciences. He is a frequent speaker and also delivers guest lectures on various issues like talking about the issues affecting the profession of the global capital markets. He believes in diversity of leadership irrespective of the gender. He believes that women are equally capable and liable in handling the corporate affairs and one must support them in their venture. Their spouse(s) should not have hassles with their increased salary or promotions. He says that one must focus on the long term success and building such strategies which will give fruitful results in the future as well. Nally is also famous for his commitments in challenging the stereotypes and their preconceptions of the role at PWC.

Nally has spoken in many forums like the World Economic Forum, the Asia Pacific Economic Cooperation CEO Summit, Financial Executives International, the St Petersburg International Economic Forum, the China Development Forum, the Detroit Economic Club, the Global Competitiveness Forum, New York University’s Stern School of Business and Duke University’s Fuqua School of Business. These forums are one of the top class forums inviting delegates and people of honor to speak and share their viewpoints. Nally has shared dice with many other delegates and has proved his worth in terms of foresightedness, planning or the strategic thinking.

This corporate dossier came to this universe in the year of 1952. A roman catholic by religion his nationality is the United States and white by ethnicity. He attended the Western Michigan University in the year 1974 for completing his bachelor’s degree in B.A. Further he went to Colombia University and Pennsylvania University to attain the degree in Executive Programs.

Even at the age of 61, Nally actively participates in forums and delivers guest lectures. His age is not at all hindering him from exploring new dimensions every day. He learns new things every day and tries to incorporate them in his working. He is associated with PWC since the year 1974.

Mr. Nally leads many of the PWC’s corporate responsibility efforts which include involvement with international organizations like the World Business Council on Sustainable Development, the World Economic Forum’s Global Citizenship Initiative and the United Nations Refugee Agency. He also represents PWC to the United Nation’s Global Compact; this is an organization that has its commitments towards aligning their operations and strategies with ten universally accepted principles in the areas of human rights, labor, environment and anti corruption.

Initially he joined PWC’s Detroit office in the year 1974 and then became a partner in the year 1985. At the beginning of the year 1992, he served in various leadership positions within the U.S firms like National Director of Strategic Planning, Audit and Business Advisory Services Leader and Managing Partners.

Dennis has extensive experience of serving large multinational clients in a variety of industries. The principal aim and objective is focused on the technology market which includes computers and life sciences. His lectures and speeches revolve around the topics like issues affecting the accounting profession and the US capital markets and he has also spoken in many forums like Cambridge Energy Research Association, Annual Global Energy Conference, Wake Forest University’s Hylton Lecture Series, the Leighton Lecture Series at the University of Illinois, World Economic Forum, the Asia Pacific Economic Cooperation CEO Summit, Financial Executives International, the St Petersburg International Economic Forum, the China Development Forum, the Detroit Economic Club, the Global Competitiveness Forum, New York University’s Stern School of Business and Duke University’s Fuqua School of Business .

Working with the senior partners of the PWC he is responsible for setting the strategic direction of the network and facilitating the alignment in the execution of the strategy drawn. He believes that there should be diversity in leadership and only this diversity helps in achieving the accolades desired.

Nally is the Chairman and Senior Partner of the PWC LLP and a member of the U.S firm Board of Partners and Principals and the Leadership Team also. He was first elected as the PWC LLP Chairman and senior partner in the year 2002. He was then re-elected for his second term as the chairman with PWC in the year 2006. From the year 2000 to 2001, he served as the Managing Partner of the U.S firm and he served as Audit and Advisory Services Leader for the Americas Theatre for the year 1998 through 2000.

Dennis joined PWC’s Detroit office in the year 1974. In the year 1985 he became the partner of PWC. From the year 1985 to 1988 Dennis served in the National Office Accounting services Group in New York. From the year 1988 to 1992 he was a Partner in charge of the U.S firm Dayton, for their office in Ohio. From the year 1992 to 1995 he served as the US firms National Director of Strategic Planning and then from the tear 1995 to 1998 he was Vice Chairman delegating the responsibilities for finance and key client service support which included the technology and office operations.

Married to Karen, Nally is the proud father of four children, one son and three daughters likewise Brian, Lindsay, Kathryn and Lauren.