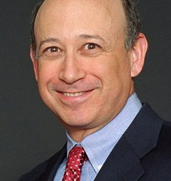 I have aspirations to be desired...

It is said that, the older you grow the wiser you become. Experience, foresightedness, risk aversion and creative thoughts are the pillars of one’s personality. These are all applicable to one person. He is the person who is the ware house of abilities; skills and make plans which proved to be very fruitful for the company. When we talk about the banking sector the first name which strikes to the mind of every single corporate is “Lloyd Craig Blankfein”. His dynamic personality followed by ardent attitude towards work makes him a senator who rules the banking sector and had made Goldman Sachs touch the new heights, which no one could have ever imagined in dreams.

His outrageous performance in the banking segment had helped him in making his presence aware in the corporate scenario. Passion and courage are the essential elements which have contributed in making him a confident and a dignified persona. One may assume that constant vilification does not affect Blankfein; but it does affect him. Nonetheless Blankfein prefers to cast away his stress by singing along to the lyrics of Lady Gaga rather than taking a seat on the couch of therapist.

An American business executive Blankfein is the CEO of Goldman Sachs. Blankfein is serving as Chief Executive since May 31, 2006. Blankfein follows the Democratic political party. A dynamic personality Blankfein has the vaster horde to work and attend the late night overseas call. With the cast-iron determination he had turned tables by generating profit even when other organizations were incurring losses. Wall Street is one such place where money travels in herd and the firms need to get them right else they may suffer losses. His intellect, wits, knowledge of history and deep understanding of trading set him apart from other titans of the Wall Street.

September 20, 1954 saw the birth of an elite corporate tycoon Lloyd Craig Blankfein. Born in Bronx borough of New York City to a Jewish family and reared in the Linden Houses. Blankfein’s father was a clerk with the U. S Portal Service branch in the Manhattan borough of New York City and his Mother was a receptionist. He received his primary and secondary education from the public schools of the New York City Department of Education. Blankfein was the Valedictorian at Thomas Jefferson High School in the year 1971. For further higher studies Blankfein attended Harvard College where he lived in Winthrop House and earned his A.B in the year 1975. In the year 1978 Blankfein received a J.D. degree from Harvard Law School. He went to the Harvard at the tender age of 16 and his son also went to Harvard at the same age.

Blankfein marked the beginning of his career by working as a corporate tax lawyer for the law firm Donovan, Leisure, Newton and Irvine. In the year 1981 he joined Goldman’s commodities trading firm, J.Aron & CO as a precious metals salesman in its London Office. His work consistency, endless efforts and greater profundity have brought him at his desired place and position.

Even at the age of 58, Blankfein’s spirits are very high and he starts his day with new commitments and tries to fulfill them by the end of the day. According to a source from New York Mag, Blankfein was chubby and brainy, but later Blankfein preferred to be a nerd instead of a chubby youngster focused on being funny and entertaining. Apparently when he was at Harvard, Blankfein earned a reputation for his ability to memorize television jingles and popular songs. Blankfein still retains the same talent and prefers to sing in an order to reduce his stress. Sources add, that the reason for his swift through Goldman Sachs was much to do with his high EQ. the former executive said that Blankfein is a real human being who has a day’s time if someone’s father has expired and is always ready with a joke when the mood got too tense.

Once dubbed “the master of the quip” Blankfein has made more than a few headlines with his penchant for one liner. Blankfein took the charge of Chief Executive Officer in Goldman Sachs on May 31, 2006. He earned a total of $54.4 million in 2006, as one of the highest paid executives on the Wall Street. His bonus was reflected in the performance of Goldman Sachs which reported the net earnings of $9.5 billion. Even though Goldman Sachs is the most imitated and envied bank around, Blankfein is still intent on proving his firm to the world.

His Journey with Goldman Sachs

Blankfein’s journey with Goldman Sachs started in the year 1981, when he joined Goldman’s commodity trading arm as a precious metals salesman in its London Office. On January 13, 2010

Blankfein testified before the Financial Crisis Inquiry Commission, that he considered Goldman Sachs role as a market maker and not as a creator of the product. In November 2011, Blankfein was listed on 43 by the Forbes Magazine List of the World’s Most Powerful People. Blankfein has been contributing mostly to the Democratic Party candidates and donated $4,600 to Hillary Rodham Clinton in the year 2007. Goldman employees and their relatives contributed almost a million dollar to Barack Obama’s election campaign, thereby making it the company from which Obama raised the most money in 2008 and after that Blankfein had visited White House fourteen times as of January, 2013.

Gary Gensler the Chairman of the Commodity Futures Trading Commission, Mark Patterson a former Goldman Lobbyist who is the chief of staff to Treasury Secretary Timothy Geithner, Robert Hormats the under secretary of state for economic, energy and agricultural are the other elite dignified former Goldman executives who hold senior positions in the Obama administration.

Married to Laura Susan Jacobs on June 9, 1983 Blankfein is the father of three children.