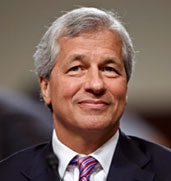 Learning has to be a lifelong commitment…

Banking sector is his power. His foresightedness and dynamic personality had made wonders happen in the banking segment. Listed as one of the most powerful and influential people. Drenched in the pool of success Jamie Dimon is a man of courage and valor. He is none other than CEO of JPMorgan Chase.

Leadership is his asset and he has the power to rule over the minds of people by his intellectual personality. His constant efforts made him reach at the position which he had dreamt off. He is the one eho has offered with a package of $23 million for the fiscal year 2011.

Born on March 13, 1956 in New York to Theodore and Themis James “Jamie” Dimon. JPMorgan Chase is one of the Big Four Banks of the United States where currently Dimon is working as the chairman, president and chief executive officer. Dimon is of Greek descent as his paternal grandfather was a Greek immigrant and a banker in Athens. Dimon has an elder brother named Peter and a fraternal twin brother named Ted. He attended Browning School.

He went to Tufts University and majored in psychology and economics. During one summer break he worked in Shearson where his father and grandfather both were stock brokers. After his graduation Dimon worked in a management consulting for two years. Dimon got enrolled in Harvard Business School, where Jeffrey Immelt, Steve Bruke, Stephen Mandel and Seth Klarman were his classmates. During the summer breaks at Harvard Dimon worked at Goldman Sachs. He graduated from Harvard in the year 1982, with Masters of Business Administration as a Baker Scholar. He had standing offers from Morgan Stanley and Lehman Brothers to join them as an Assistant at American Express and Goldman Sachs.

Theodore Dimon, father of Jamie was an executive vice president at American Express and James Dimon came into the attention of sandy Weil when Theodore passed along an essay which was written by junior Dimon.

Dimon worked during the summer breaks, when he finished his graduation from Harvard Business School as a baker Scholar. At that time, he had many opportunities to work with firms like Morgan Stanley and Lehman Brothers and also Goldman Sachs. Due to some circunstances, Weil left American Express in the year 1985 and Dimon simply followed his footsteps. The duo then took over Commercial Credit a consumer finance company and Dimon served as the chief financial officer for the same. After a number of mergers and acquisitions, in the year 1998 Dimon and Weil were able to form the largest financial conglomerate named Citigroup. In the same year, Dimon left Citigroup after being fired by Weil during a weekend executive retreat. Reason which came in light for Dimon leaving Citigroup was that he and Weil had a fight over Dimon not promoting Weil’s daughter Jessica M Bibliowicz, even though this had happened over a year ago.

The rumors of Dimon being suspended by Weil reluctantly became true when Dimon himself confirmed it in his interview with University of Chicago Graduate School of Business in the year 2005 and 2006 Kellogg School of Management. He then resigned from the post CEO of First Chicago Corp. , became CEO of Bank One which is the nation’s fifth largest bank in March 2000. Four years after JPMorgan Chase purchased this bank and Dimon was appointed as the president and chief operating officer of the merged company.

Dimon was still climbing the success ladder. He was named as Chief Executive Officer of JPMorgan Chase on December 31, 2005. Following the success ladder Dimon was named as the Chairman of the Board on December 31, 2006. Series of promotions and events did not stop here only. Dimon was nominated as the Board Member of the New York Federal Reserve Bank in the year 2008. As a CEO of JPMorgan Chase and member of the board of the New York Federal Reserve Bank, he made essential decision,with regard to $55billion bailout to Bear Stearns.

On September 26, 2011 Jamie Dimon had a high profile heated conversation with Mark Carney governor of the Bank of Canada. The provisions supported by Dimon said that Basel III were discriminatory against US banks and also said that these provisions were not favouring USA.

Dimon’s journey as a chief executive officer began in December 31, 2005. He took major decisions which helped JPMorgan Chase to generate a loan of $55 billion from New York Federal Reserve Bank. As the head of JPMorgan Chase, Dimon oversaw the transfer of $25 billion in funds from the US Treasury Department which was the fifth largest amount transferred under section A of TARP(Troubled Asset Relief Program) related to residential mortgage.

There was some controversies, when it came to relieving the monetary funds to the banks. The government did not relieve those funds and instead started to pinpoint the flaws. He says that “JPMorgan would be fine if we stopped talking about the damn nationalization of the banks. We’ve got plenty of capital. To policy makers, I say where are they? They approved all these banks and now they are beating the bush upon everyone saying look at all these mistakes and we’re going to come and fix it.”

Dimon is said to have close ties in the White House, and also he is one of three CEO’s along with Lloyd Blankfein and Vikram Pandit who have liberal access to Treasury Secretary Timothy Geithner.

According to the US Senate report published in March 2013 after 9 months of investigation it was found that Dimon had misled investors and regulators as losses rose dangerously to $6.2 billion on a monstrous derivatives bet made by the London Whale Bruno Iksil. According to Carl Levin, chairman of this panel “JPMorgan had a trading operation that piled on the risk, ignored limits on risk taking and hid losses.”