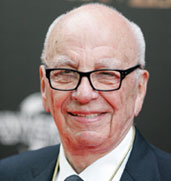 In motivating people, you've got to engage their minds and their hearts...

Investment is his strength; risk aversion is his key to success; savings became the base for his passion and success. He is the man of courage and determination who turned the table all on his own and made the venture a success and fun to do.

Aged 82 years, but he has the courage and determination of a young entrepreneur, energy like a young boy. He is the man who inherited the charge of his paternal company when his father passed away. Just ageing 22 and fresher in experience of life and work, he turned the blues into white with his innovative strategic plans. The aura became the witness when he took over the company and made it a big success among other existing big giants of that time.

Son of a renowned journalist it was sure for him to enter into the world of journalism but no one knew that, he will make wonders happen. He did not restrict himself simply into publishing the news and getting it deliver to every door step. He took over other struggling agencies and brought them under the banner of Murdoch. After the inheriting the firm from his deceased father Rupert Murdoch named it as “News Corporation” where earlier it was known by the name of News Limited.

His continuous efforts in the direction of technological expertise and expansion he paved his way smoothly towards getting his name registered among the big conglomerates.

Keith Rupert Murdoch came to this universe on March 11th 1931 in Australia. He inherited his middle name from his maternal grandfather. He was the son of a reputed journalist who used to own the number of local and regional newspapers. This became the base for Keith Rupert Murdoch’s career. They owned a family farm which was named as Cruden Farm after the Scottish village, the place from where his parent had originated.

Rupert Murdoch had spent beautiful childhood with his parents, in his ancestral house, situated in the Scottish village made up of colonial pillars, adorned with original paintings, a grand piano, library of books, situated amongst the green lands of the farms and ghost gums. Murdoch’s innocent childhood and fun loving youth suddenly ended with a setback of his father’s death. The trauma of losing his father was inevitable; it has created a gap which could not be filled in any manner. And this marked the beginning of his career in the field of journalism. In the year 1953, 22 year old Rupert Murdoch, came back to Australia to sum up the remaining reins of the Adelaide Newspapers, The News and the Sunday Mail.

Murdoch graduated from the Geelong Grammar, a prestigious boarding school in the year 1949 and then went to Worcester College at Oxford University in England.

When he took over the charge of his father’s left over, the firm was not in such a good position. He emerged by writing headlines, redesigning page layouts, content included more of sex, scandals and crime which ultimately landed him in to controversy. Despite this controversy the newspaper gained heights with every passing day as these columns were something different from the daily news.

His constant efforts showed the results and within three years he did his first takeover by taking over Perth Based Sunday Times. He was not satisfied with this only. In the year 1960 his takeover gave him recognition in the world. He made an entry in to the lucrative market of Sydney by purchasing the struggling Newspaper Daily and The Mirror and transformed it into Sydney’s best selling afternoon newspaper. Also during the same year, Murdoch started expanding his crusades in the field of television and entertainment. In the year 1985 he made another big takeover by purchasing the Twentieth Century Fox Film Corporation along with several other independent television stations and collaborated them under one brand name of Fox Inc, which has become a major and essential American television network. The year 1990 marked another important decision, he founded star television which was a Hong Kong based television broadcasting company. 1980s and 1990s saw the takeovers and amalgamations under the banner of Happer Collins.

Entertainment is not the only field to which Rupert Murdoch was restricted. He had also invested in sports. As he is the proud owner of Los Angeles Kings NHL franchise, Los Angeles Lakers NBA Franchise and the staples centre followed by Fox Sports Radio and Fox Sports.com. He never satisfied with one victory and his constant efforts and passion to try new things has made him to reach this stage. His basic aim is to attract more and more people towards the media. He also acquired many big and small firms like Big Fish Intermix Media and MySpace.com.

If we see the whole journey at a glance, we will find that Murdoch had constantly tried to enhance and expand his business horizons in every dimension of his business and he has gain success in each and every single attempt.

His conservative political views have always been a reason for controversy. But controversies gain the name and fame. Rupert Murdoch had also spent dollars in charity for good and noble cause. In the year 2010, he donated $1 million each to the Republican Governors Association and the US Chamber of Commerce. It has created controversy again and the rivals.

Rolling eyes across the globe can be seen that Rupert Murdoch has a market share nearly in every small or big ventures related to media like news reading, television shows, films, radios, websites on which the bloggers are actively posting their blogs and the social media networking they have created. Counting his fortune in tangible monetary form, he has approximately $6.2 billion and Forbes magazine has listed him as the thirteenth most powerful person in the world. Hearing such glamorous news whose confidence will not increase. This worked as a fuel enlarging his goals, motivation, zeal and enthusiasm.

When Rupert Murdoch took over the remains of his father’s business, he was quite excited to achieve something. His excitement was to influence the agenda of what was going on. His crowning glory and success is the outcome of his impeccable thinking and analytical ability, foresightedness, courage and willingness to do things on its own.