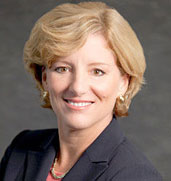 We continue to work aggressively toward turning around the business...

One might think that all the work that Sheri McCoy had done for Johnson & Johnson for three decades had been put to dust by a bunch people with prejudices. Some others may even attach a bit of chauvinism to the fact that Sheri McCoy was robbed of the opportunity to become the CEO of J & J (Johnson & Johnson). Some may yet say that it was the difference in their tempering - Sheri was an R & D person while her contemporary who went on become the CEO was a tough-as-a-nut sales guy, a thorough-bred from West Point- which tilted the decision in his favor.

While that was one school of thinking, which made Sheri part ways with a company she had given almost the best part of her life to, there was another which chose to ignore that she was from a pharma background and yet selected her to be the CEO of one of the world’s leading beauty products company. On the face of it, the decision to do so would appear like a mindless one – her 5 patents, her achievements at J & J notwithstanding. More so when the person you have selected to assume the top position was passed over for another one despite a good record at the previous company.

Whatever may have been the reasons, Sheri McCoy has a job at hand. And, a tough one at that – resurrecting the company that appears to have lost its way somewhere and bringing a turn-around. True to her earned leadership style, she has already on the effort, with a point or two to prove.

Sheri was born in 1959 in Quincy, MA. Acquaintances recall to have noticed a creative bent of mind in Sheri very early in her childhood so it wasn’t any surprise that the young girl would go on to do her Bachelors in textile chemistry (from the University of Dartmouth, MA), her Masters in Chemical engineering (from Princeton University), and top it all with an MBA from Rutgers.

Sheri was very clear as to what is to be made of her right from the beginning. So, right after she had completed her Masters in 1982, she joined Johnson & Johnson as a chemical engineer. Her role as a scientist in research and development (R & D) entailed research & development on women’s health products.

The Spark of Leadership

Sheri was always of the belief that a great company begins with passionate and empowered people. Therefore, throughout her career at J & J she consistently promoted employee engagement, leadership development and diversity of thought. And now, as the CEO of Avon, she is committed to its five core values of trust, respect, belief, humility and integrity.

Her main strengths are seen to be a collaborative style and finesse at culture-building. It was a good mix of these values, convictions, and qualities that had seen her grow through the ranks at J & J.

Subsequent to her initial research scientist role where she was asked to lead the company's research and development division, she was elevated to the post of the global president of the division of the company that developed products that meet the needs of infants, along with products that treated small injuries and wounds. Her work at J & J also gave her an opportunity to manage businesses in every major product sector, including consumer, prescription medicines and medical devices.

Her rise to be a part of the leadership team happened after more than a good two decades in 2005, when she was appointed to serve as the chairman of the Ethicon Endo-Surgery device division. As part of her role, she was responsible for business in Latin America besides simultaneously serving as a member of the Operating Committee of the Medical Device and Diagnostics Group.

Then, in 2008, Sheri was appointed to chair the Surgical Care Group. This leadership role catapulted her to the higher echelons of power in the company, establishing her as a member of the company's Executive Committee. This meant that Sheri was one of the highest-ranking female executives in the global drug industry. She led marketing at the skin-care business and ran the unit that sells baby powder and Band-Aids.

A year later, in 2009, she was made Worldwide Chairman of the Pharmaceuticals Group of J&J, where she was responsible for new product development and distribution, along with acquisitions and partnerships. She also led the group during legal proceedings and loss of patent exclusivity. When she took the helm of the pharmaceutical business, it was said to have been losing $5.75 billion in sales as drugs such as the antipsychotic Risperdal and Migraine drug Topamax faced generic competition in the U.S.

But, in a mere two years i.e. by 2011, the pharmaceuticals unit started showing signs of a turnaround. It had won approval of several new medicines, including Incivo for hepatitis C, Zytiga for prostate cancer and the blood-thinner Xarelto. Sales at the unit climbed to $24.4 billion in 2011, after declining each of the previous two years, and analysts expect them to keep rising.

She eventually rose to the ranks of Vice Chairman (in 2010) and member of the Office of the Chairman (of Johnson & Johnson), where she was responsible for the pharmaceutical and consumer business divisions of the company.

The Flight to Avon

After two years of wrangling and dilly-dallying, when the J & J board had to select a successor to William Weldon as CEO, it decided to pass her over in favor of Alex Gorsky, who was then the head of the industry trade association known as Pharmaceutical Research and Manufacturers of America (PhRMA), was named to succeed Weldon in February 2012.

Sheri had demonstrated her leadership, vision, and work ethics in full measure in a 30-year career at J & J. For somebody of that kind of professional pedigree, this was nothing short of a snub. So, she promptly put in her papers.

Around the same period i.e. since the time Sheri and Gorsky had become the known contenders for Weldon’s role, Avon one of the world’s leading beauty products maker was going through some rough times. The predicament of the board was compounded further by buy-out bid by Coty, which was not only audacious but also considered undermined the true value of Avon. Taking cognizance of this, the board was convinced that to bring about a turn-around in the fortunes of the company and also to prove the world what Avon’s true worth was, they needed a leader who had seen it all, been there, done that – the turn-around of the pharmaceuticals unit at J & J for one.

And, in Sheri McCoy, they thought what they were looking for. As if, perhaps, not only Avon but Sheri herself had a thing or two to prove, she was appointed CEO of Avon products in April 2012.

Simply speaking, she has an uphill task at hand. The performance of the company, customers’ mindshare, the non-performing units, the sagging morale of the work-force, the bloated infrastructure, and the dwindling confidence of the share holders – all of it she has address.

She started with load-shedding i.e. the decision to cut-down the work force. That was followed by a decision to wind up units or operations that were not only underperforming but were proving to be a thorn in the flesh of the company’s aspirations, while some other units which were not able to even pull-in their own weight have been put on performance improvement modes.

The next big aspect that she has started to address was the marketing. She realized that the marketing efforts had twin problems: one, they were not effective and two, the apparatus needed a make-over to be able to performance as per desired standards. So the immediately ordered a revamp to the entire market set-up of Avon. It’s just been a year since she assumed the top position and it may be just too early to assess her impact on Avon but people are already of the view that she is having an impact.

Sheri McCoy is a member of the board of FIRST, a non-profit organization created to inspire young people’s interest and participation in science and technology. She is also a board member of Stonehill College.

Sheri has been at the forefront of research and development right since her college days, a passion which she carried over to her profession and was able to give shape to all of her thinking, creativity, and sense of purpose through a spate of R&D efforts that have led to some innovations. And, to her work and to her credit, she has been granted as many as 5 (five) patents (some from both the USPTO and EP).