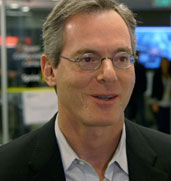 The fortunate thing for us is that consumer demand for wireless data is so strong...

History has very few instances of people or personalities who were able to do what they aspired to, throughout their life. The number of people doing it with much success and glory is fewer still, because the vagaries of life often catch up and, one is forced to comprise a bit. But Paul Jacobs, the CEO of Qualcomm, did not have to face any such thing – primarily because he didn’t let things get that iffy. From his childhood on, through his higher education, he was a winner all the way. And, that winning streak has continued to date – something that is manifest in the number of awards and honors bestowed upon him by contemporaries and general folk alike.

He has been a development engineer, VP, Group President (Qualcomm Wireless and Internet Group from July 2001) and a master strategist. But above all, he has remained as an innovator to the core – the number of patents he owns is just astounding, to say the least. Not surprisingly so, because the innovative bent of mind was so very intrinsic to Jacobs ever since he was a child. And, he has done it all in just a matter of less than two decades – the heights he has scaled from being just a development engineer to become the CEO of one of the technology pioneers in the world is something that has taken many other renowned leaders much longer than the 15 or 16 years it took Jacobs.

In fact, it is said that it was his strategic vision and advocacy for innovation that has led Qualcomm‘s efforts in developing as well as commercializing mobile technology which, in effect, has made Qualcomm one of the pioneers in the field of communications technology, as also one of the most valued technology companies. He has undertaken and overseen a number of key initiatives for the company that have been huge successes.

Being the son of the co-founder (Irwin M. Jacobs) of the company which he was to lead eventually, did not make it any easier for Jacobs’ early years. Add to that the fact that he had three brothers, with whom there was undeclared and undefined yet positive competition. Therefore, like any other young kid, he was also made go through the rigors of formal education, training, internships, and so on. He received his bachelor's (1984) and master's (1986) degrees as well as his doctorate (1989) in electrical engineering (The Ph.D. also had computer sciences with an emphasis on robotics) from the University of California, Berkeley.

After completing his Ph.D. in 1989, he joined a French government lab in Toulouse, as a post-doctoral researcher and worked there for one year. This gave wings to the innovator in him, as also the confidence to reach out for greater things in the field of his choice.

Jacobs joined Qualcomm in 1990 as a development engineer where, in the next five years, he was to lead the team that was working on the mobile phone digital signal processor software. His work is said to have been focused on the initial variable-rate 8 kbps speech codec for CDMA. Jacobs then spearheaded the wireline-quality 13 kbps speech codec effort, which became CDMA's initial differentiating consumer feature. Obviously, the innovator in him had his effect on the various teams that he worked with in those five years during which the company did some really outstanding work in the field of communications – at a stage when mobile technology the world over could at best be termed as being in its nascent stages. It was natural that the company leadership spotted this spark in Jacobs and within just half-a-decade since he joined them, he was made vice president and general manager of the combined handset and integrated circuit division. The division, subsequently, went on to be divided into Qualcomm Consumer Products (QCP) and QCT.

The innovative and inspiring leader of Qualcomm

Thereafter, Jacobs’ growth went on an upward spiral and hasn’t looked back ever since. He was named senior vice president of the company in 1996 and president of QCP in 1997. Then, within a span of just three after that, in 2000, he was named executive vice president of Qualcomm and group president of Qualcomm Wireless & Internet (QWI) in 2001. Under Jacobs, with the CDMA digital handsets business, which had a global deployment in the 1990s, QCP became the No. 2 CDMA handset supplier in the U.S., with revenues of more than $1.4 billion in Fiscal 1999 (prior to its sale to Kyocera Wireless in 2000). QCP gave Jacobs the perfect platform to give went to his innovations as well as gain extensive operational experience. He was instrumental in the launch of numerous CDMA systems while at the same time, he cultivated important executive relationships at top network operators and manufacturers globally.

In just a decade after that (2005), Jacobs became Qualcomm’s CEO, and his work in which position also earned him the confidence of the board and share-holders alike to be appointed as its Chairman in 2009.

He has undertaken, and overseen, a number of key initiatives for Qualcomm that have been huge successes. As the innovative leader of a broad range of technical teams Qualcomm, Jacobs owns more than 45 patents for his inventions in the areas of wireless technology and devices and allied technologies.