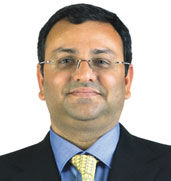 I am aware that an enormous responsibility, with a great legacy, has been entrusted to me…

Cyrus Pallonji Mistry, 44, replaced Ratan Tata, who had step down, after turning 75. Mistry will be the sixth chairman of Tata Group in its 144-year history and only second who does not carry the "Tata" surname. His multi-talented business skill has seen him touching more than 15,000 crore turnovers in every organizations. He has remained low-key, media-shy and unassuming throughout his illustrious tenure. We take a look at some little known facts about the successor to the Tata throne.

Cyrus Pallonji Mistry was born on 4th, July, 1968. He is the youngest son of Pallonji Mistry, an Irish-Parsi construction tycoon. Mistry's grandfather first bought shares in Tata Sons in the 1930s, a stake that, as of November 2011, stood at 18.5 percent, which is in the hands of Mistry's father, the largest single shareholder in a firm mostly controlled by trusts. Mistry considers himself to be of Irish nationality because although his father is Indian-born, his mother is Irish.

Mistry studied at the Cathedral and John Connon School in Mumbai and graduated from Imperial College, London with a BE in Civil Engineering; he also holds a Master of Science in management from the London Business School. Cyrus Mistry is a fellow of the Institute of Civil Engineers.

In the beginning, he undertook simple jobs for the military and PWD, constructing barracks, small public holdings etc. Later he procured bigger contracts like construction of a small hospital as well as an ammunition factory. Under the Cyrus’ guidance, Shapoorji Pallonji’s construction business has grown from a turnover of USD 20 million to approximately USD 1.5 billion.

Cyrus Mistry has been managing director of Shapoorji Pallonji & Company, which is part of the Rs 15,000-crore Shapoorji Pallonji Group (SP Group). He got the chance to join Tata Sons' board a year after his father retired as director in 2005 and has been serving in the capacity of a director of Tata Sons since September 1, 2006. In August 2009, the board of directors of the Tata Group got together to decide a suitable successor to Ratan Tata, who is due to retire in December 2012. The chairman of Tata Sons has been the chairman of the Tata Group, a trend that has been followed over the past few years. Various candidates were scrutinized for this position, but his chemistry with Ratan Tata, his understated style, strong operation experience combine with financial acumen and his Indian cum international outlook have favored him.

On November 23rd 2011, Tata Sons announced that Cyrus P Mistry as the Deputy Chairman as per unanimous recommendation of all the board members, they also stated that he would work with Ratan Tata for one year and take over from him when Tata retires in December 2012. In 2012 Mistry was appointed as the chairman of the Board of Tata Sons. In addition to being Chairman of Tata Sons, Mr. Mistry is also chairman of all major Tata companies including Tata Industries, Tata Steel, Tata Motors, Tata Consultancy Services, Tata Power, Tata Teleservices, Indian Hotels, Tata Global Beverages and Tata Chemicals.

Mistry is married to Rohiqa Chagla, the daughter of lawyer Iqbal Chagla and the granddaughter of renowned jurist M.C. Chagla. They have two sons.