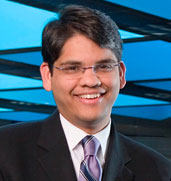 To serve the global marketplace, you need to be global…

He is the youngest CEOs of a company of this extent. At 24, he was already part of Cognizant Technology Solutions, an American it services company that was created to leverage the India advantage. At 33 he got elected as a Chief Operating Officer of the same company and four years later, he was promoted as CEO of it. Francisco D’Souza is one of the CEO's who could achieve this accomplishment at an early age and thus transformed Cognizant on remarkable stage.

D'Souza is a person of Indian origin (PIO), born in Nairobi, Kenya in 1968, and spent his childhood nearly 9 countries. His father was worked for IFS (Indian Foreign Services). He got a great global exposure as his father use to relocating to multiple countries as per his job. Early days of life, his family spent couple of years in Africa like Kenya, Ethiopia and Zaire. His father is a dedicated civil servant and his job involves about promoting India in different parts of the world. Part of his father’s job, D’Souza’s family travelled around the world and enrolled in different international schools rather than local schools and assimilated between multi diverse cultures and learned local languages of those countries where they lived. It has added much value to his future career. He gives all credits to his parents for giving him a chance to live and think in a global perspective from the childhood itself. When they relocated to Hongkong, he could find only one English medium university and that too they runs only night classes, so he started working in mornings. He learned programming to earn some money as a contract coder, that he never expected that, it was going to change his life forever.

D’Souza has nearly 20 years of rich experience in the software sector in both operational and advisory areas. But he started his career as a clerical grade employee of Indian Overseas Bank in Hong Kong branch. D’Souza started working at the age of 18, to gain relevant skills and practical experience and completed his education at the same time. After that, he worked for four years at various departments of The Dun & Bradstreet Corporation (which is the parent company of Cognizant later on it was spun off as a new company called Cognizant Corporation), holding key positions in marketing, strategic planning, and business development in Germany, the U.S. and India. It has given him a chance to explore himself in multiple areas of business development and helped to acquire rich experience.

He joined Cognizant in 1994, as a co-founder of the company. He works closely with the clients of cognizant who are using offshore resources to execute large software development and maintenance projects and supervises the business development and operational activities of the company. When Lakshmi Narayanan (Ex. CEO of Cognizant) was promoted as a Vice Chairman of Cognizant, Francisco D'Souza was named as Chief Executive Officer in 2007, at the age of 38. He is among the youngest Chief Executive Officers of the IT sector. Francisco responsible for Cognizant’s global delivery, marketing and sales, business development, and client services organizations.

D’Souza has strengthened the client relationships by delivering the unique value proposition that matches with intimate domain expert client teams with a robust seamless global delivery network. D'Souza had a clear game plan - focus on a few areas and expand into adjacent ones, be it new geographies, solutions, or industries. Throughout 2011, added 317 new clients and increased the number of strategic clients by 25 to 191, the largest increase in Cognizant history. Cognizant’s revenues have grown from $1.4 billion to over $7 billion and its employees have expanded from 55,000 to over 1,50,000,under the leadership of D’Souza.

The strategic decisions which have been taken by him at the time of global crisis helped the company to stand steadily in the market. He categorized the company's services in three categories like Horizon 1 (Which offer application development and maintenance services), Horizon 2 (Which offer BPO, IT Infrastructure Services & business consulting services) and Horizon 3 (Which offer "SMAC" - Social, Mobile, Analytics and Cloud services). He believes social media, cloud and mobile analytics as an emerging business accelerators (EBAs), and expects those to be the driving forces for the future growth of Cognizant.

From the beginning, he built the organization with 'multi-cultural' flavor. He loves experimentation and also believes that, to serve the global marketplace, need to be global. D’Souza got exposed to a varied mix of management styles over the years at Cognizant. He worked with three bosses whom have distinct, strong approaches and USPs. Spending his childhood in many countries has been given him a chance to learn new languages, networking with new friends, explore different cuisines, and living with diverse cultures. He attributes much of his and Cognizant's success to his childhood.

Francisco D'Souza lives with his wife, a son and a daughter in New Jersey. When he offered with CEO position, he first thought of his family and accepted it only, when he convinced that he could balance both. And he makes sure that he spends quality time with them, when he is at home. He says that “When I am trying to make it sound glamorous, I say I was playing soccer. The real story is that I was playing with a bunch of eight-year-old kids”.