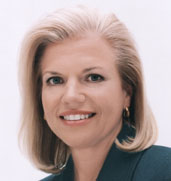 I learned to always take on things I’d never done before…..

From being a systems engineer to holding many leadership positions eventually leading up to her ascent to the top post of the century-old tech Goliath, IBM, Virginia Rometty has seen it all in a career spanning 30 years with the company (the only two years were with GM when she started out after graduating). And, being the Chairman, President and CEO of the company which has sailed though everything from depression, to war to competition --with flying colors, almost always-- is no easy job. Not only that, she also happens to be the first woman in the history of the company to lead it.

Rometty grew up in a Chicago suburb, the oldest of four children. She graduated from the Robert R. McCormick School of Engineering and Applied Science at Northwestern University in 1979 with high honors, receiving a bachelor's degree in computer science and electrical engineering.

Right after graduating, Rometty began her career as an intern with General Motors Institute, Detroit, Michigan in 1979. After her internship, she joined IBM. Although her professional career began with the automotive giant, her  real test of caliber lay ahead when she joined IBM, Detroit, in 1981. She started off as a systems engineer – a role that was closer to her field of choice – technology. It is here that she learnt the nuances of the IT business, more from the business and management perspective for the next decade or so, even as her growth as an IT professional was shaping up nicely.

From Techy To Management

After a decade of working with various engineering teams, and being part of so many innovations, it was time for Rometty to branch out and explore the other side of the business – management. She was moved to the company’s Consulting Group in 1991. She took to it like a duck to water, despite neither being groomed nor educated for the roles in that department.

She did reasonably well with the IBM consulting practice.

The Master-Stroke From ‘Ginni’

By turn of the millennium, Rometty had gained enough exposure and a sense of authority of the consulting practice that she was able to oversee, almost orchestrate, the acquisition of none other than PricewaterhouseCoopers Consulting – which in itself was a major player in the consulting sphere. As Senior Vice President, IBM Global Business Services, her clinching of the $3.5 billion dollar company got her instant recognition and much adulation. It also stood as a testimony to her entrepreneurial ability. This acquisition was, reportedly, the largest in professional services history, creating a global team of more than 100,000 business consultants and services experts. What’s more, in recognition of her leadership in the professional services industry, Rometty was honored with the Carl Sloane Award 2006, given by the Association of Management Consulting Firms. What stood out in all of this was woman power – in a historically made-dominated, or at least male-oriented corporate world, “Ginni” was able to make people stand up and look at her.

It was only the beginning, there was more to come from this soon-to-be power-woman, as she went on to hold a series of leadership positions in the company. As Senior Vice President and Group Executive, IBM Sales, Marketing and Strategy, she was responsible for business results in the 170 global markets in which IBM operates and pioneered IBM's rapid expansion in the emerging economies of the world. As part of this, she established IBM’s Growth Markets organization which, a lot of industry analysts opine, is expected to contribute about 30% to IBM’s revenues by the year 2015.

She became the senior vice president of the group in 2005, which had a definite impact as her efforts boosted profits of 42 percent in her first two years on the job. During her three-decade long association with IBM, she is known as a polished executive who can close a sale (an engaging woman -- great with customers), as well as expand relationships with companies as varied as State Farm Insurance Co. and Prudential Financial Inc.

Rometty became senior vice president and group executive for sales, marketing and strategy in 2009, in which role she is credited with spearheading IBM's growth strategy by getting the company into the cloud computing and analytics businesses – which some say, are going to bring in about $20 billion of additional revenue to IBM by 2015. She was also instrumental in getting, Watson, (the Jeopardy! playing computer) ready for commercial use.

Though not groomed as part of any succession plan, Rometty had done enough with her various leadership roles, to win the confidence of the Board of Directors, which convinced them that she had all the attributes of being the company’s next boss, succeeding Samuel Palmisano – the company’s longest serving CEO. With every leadership role, she was able to strengthen IBM’s ability to integrate its capabilities for clients. Accordingly, in October 2011, IBM announced that Rometty was to be the company's next president and CEO, and she assumed the post in January 2012. Rometty made it clear she would follow the road map the company has laid out because she was definitely one of the pillars on which it was constructed. She is implementing a five-year strategy to use new markets like cloud computing and business analytics software (to drive $20 billion of revenue growth by 2015).

In October 2012, she was also made the chairman upon Sam Palmisano’s plan of retirement. Call it co-incidence or a sign of things to come, but IBM shares this year went to the highest level since the company went public in 1915.

Rometty serves on the Council on Foreign Relations; the Board of Trustees of Northwestern University; and the Board of Overseers and Board of Managers of Memorial Sloan-Kettering Cancer Center.

Rometty is also on The Deming Cup's committee at Columbia Business School, which recognizes individuals for operational excellence. She also served on the Board of Directors of AIG from 2006 until 2009.

Rometty is married to Mark Anthony Rometty, whom she met during her internship at the General Motors Institute.