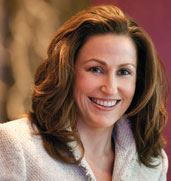 My vision as CEO is simple: Doing good and providing access to high quality medicine to the world’s 7 billion people…

One is bound to attract much attention – both due & undue – if one happens to be the child of a senator as it is. And, if one is a successful one at that, then one’s pain from such un-called for attention – often criticism, can take its toll on the person. But, Heather Bresch, the boss of one of the world’s leading pharma power-houses, Mylan, has seen it all in her 20-year long career with the giant in 15 varied positions, and knows exactly how to handle it and, answer it in her own way. Beyond all this, if one is willing to see through the lines (published & spoken about her on how she may have been the beneficiary of her father’s position & political clout), one will find that Bresch is an able professional, and the leader that is now surfacing was already in there --the first woman to lead a Fortune 500 pharmaceutical company-- something that she may have actually inherited from her father. She has earned the respect of her fellow employees, the industry, and external stakeholders because of her passionate and visionary leadership, a work ethic that is second to none, and her track record of driving operational excellence through the organization and getting results. And, she is the first woman to lead a Fortune 500 pharmaceutical company, to boot!

Over and above all this, what she has achieved and what she has been able to facilitate -- easy access to many life-saving drugs to the people of the world, especially the U.S. consumers, regardless of with or without her father’s weight behind her, will forever be known as the outstanding work of this truly remarkable lady.

Bresch is the daughter of U.S. Senator and former West Virginia Governor, Joe Manchin, who himself hails from an Italian-American family. The culture of the family -- in Heather’s words -- of boys being somehow entitled to all the opportunities, left the girls to create their own opportunities if they wanted to succeed professionally. But Heather, being the strong personality that she is, rebelled. After graduating from West Virginia University with a degree in International Studies and Political Science in 1991, she moved to California, where she thought she would get the space to figure her own path – away from the stereotypical traditions of her family.

That brief digression did not work out the way she had imagined, so she came back to her home state to seek opportunities. By this time her businessman father had risen to become the senator from the state of West Virginia and, naturally, like all doting fathers, he also was a little anxious as to what is to be made of his dear daughter.

The unlikely spark that showed the path

Well he did not quite know what would be in store for his daughter but he did one thing, so very serendipitously, for her. He ran into the co-founder and then CEO of Mylan Inc, Mike Puskar, during the course of a basketball match they both had been to see. Apparently, he casually mentioned to Puskar that his daughter was back in the state and seeking an employment opportunity, and sought to know if he could do something about it. Reportedly, Mike Puskar promptly got his team to hand Heather her first job.

But the job offered was not to Heather’s liking. She was asked to take up the data entry operator’s role in the quality control department of the company , where her primary responsibility was to type-up stickers on products that she could not even pronounce the names of, in the basement of the manufacturing building. Especially not, when she had quite a few other opportunities that were in line with her educational qualifications & interests.

She initially declined to take the offer. But, like they say, elders’ wisdom, if paid heed to, more often than not is useful. So it was her father, who almost coaxed Heather into giving it a try for at least a year, as being the visionary himself, he knew the company was on the path of wonderful growth.

And, out of her own admission, that was perhaps the one and only time she had been the dutiful daughter. She took it up and, in the decade that followed, learned the industry inside-out, of which she knew nothing of to begin with, and discovered that there were many intrinsic problems which she could help the company address.

Rise through the ranks

Her detractors continue to crib but none can take away the fact that she had stayed loyal & faithful to both her profession and the company. So, it was, that after 10 years of service & understanding the nitty-gritty of the business Mylan delved in, she was promoted as Director of business development in 2001. She was then made Director of Government Relations the following year (March 2002), in which post she served up to February 2004, when she was further elevated to the post of Vice President of Public and Government Relations of Mylan (from February 2004 to April 2005).

Her rise up the leadership ladder was really picking up speed in the 2000s, and unsurprisingly, she went on to become the Vice President of Strategic Corporate Development of Mylan, Inc (May 2005 to February 2006).

Bresch was able to stamp her persona on Mylan, which was created largely on the basis of her understanding of the purpose of Mylan’s business as one that was to be – net-net- in the interest of people more than anybody else. More so the U.S. people. When she was moved up to a position of authority where she could exercise her power to do things that she really wanted to do for the company as well as the people, she did them without fear or much difficulty.

Bresch played a vital role in the passage of the 2003 Medicare Modernization Act, a congressional revision to the Hatch-Waxman Act of 1984, which helped to ensure consumer access to affordable pharmaceuticals.

That besides, as is known, and reported often, Bresch has been a leading advocate for one quality standard for all drugs sold in the U.S. Accordingly, her strong lobbying proved to be instrumental in the development of the Generic Drug User Fee Act. She also advocated for changes to the Federal Food, Drug and Cosmetic Act of 1938 to arm the U.S. Food and Drug Administration with the resources and authority to regularly inspect U.S. and foreign plants at the same rate, both of which were included in the Food and Drug Administration Safety and Innovation Act (FDASIA).

She even testified before the U.S. House of Representatives' Committee on Energy and Commerce in relation to drug supply chain integrity, drug shortages and the Generic Industry's Drug User Fee proposal (GDUFA).

Her next claim to fame came when, as the chief operating officer and chief integration officer of Mylan, she lead the successful integration of two transformational and game-changing international acquisitions – Matrix Laboratories and Merck KGaA’s generics business.

One is bound to be in the eye of storm if one is even remotely connected with the power-circles. The propensity of people to denounce anyone who is successful and also, co-incidentally, related to a famous personality, has been much talked about. But, as they say, there is no smoke without fire, the controversy relating to Bresch being awarded an MBA degree without having completed the required credits, is only discernible. It will be unfair to all concerned to comment here one way or the other as both, Bresch & the University, seem to be in denial mode, and until the truth comes out, it is better to keep a lid on the issue – as her M.B.A. degree, for all practical purposes, is almost inconsequential to her role as the leader of the $6 billion pharma major.

Bresch has served two consecutive terms as chairman of the Generic Pharmaceutical Association and one term as its vice chairman.

Bresch’s key policy priorities have included working extensively to ensure that everyone living with HIV/AIDS has access to treatment and, not only that, advocating for treatment soon after diagnosis to ensure better health outcomes, reduce HIV transmissions and create long-term cost savings, have also bear the Heather Bresch mark on them. As part of this effort, she worked to bring the necessary attention to issues in developing countries for patients in need of antiretroviral (ARV) treatment for HIV/AIDS. Further, she has helped position Mylan as a leader in the development and manufacture of ARVs. Today, approximately one out of three people in the developing world is reportedly being treated for HIV/AIDS depends on a Mylan ARV product.