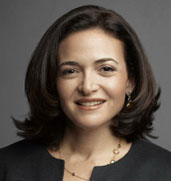 Sheryl Sandberg is only 43 and she has traversed a success path like very few of her ilks have done. Starting off as an aerobics tutor, her stints from being the chief of staff to the U.S. Treasury Secretary, a management consultant, an economist, and a VP global online sales to her elevation as the COO of the number one social networking site Facebook – of which she was also made a director, the first female to have made it to the board, have been a real treat to follow. She herself knows it pretty well that her rise through the ranks at various employers is likely to be lost in the fast-paced environment and the millions of other issues the global economy is facing today, more so the technology field. That is why, perhaps, this Harvard groomed and successful technocrat is also making a conscious effort to drive home the need for a greater number of women to be allowed to assume leadership positions by proper grooming and support by everyone concerned; more so the male counterparts or superiors.

Sandberg, the quintessential American businesswoman is of Jewish descent. She was born in August 1969 to Adele and Joel Sandberg of Washington, D.C. (the family moved to Miami not long after Sheryl was born). She attended public school in Miami where she is known to have been always at the top of her class. Her parents, both erudite personalities - father, an ophthalmologist and who was also a partner in Eye Surgery Associates, and mother who was a teacher of English (as a second language at an EF International Language School in Miami Beach), had imbued in Sheryl the qualities of education, hard work, progressive thinking, and career-orientation.

Thus, the young Sheryl voluntarily took to work at a very young age. She taught aerobics to children while she was still in high school. And since her pedigree dictated education to be a top priority in her formative years, she went on to do her Bachelors (in economics) and Masters in business management from that world renowned institution, Harvard College (where she was awarded the John H. Williams Prize for the top graduating student in economics) & Harvard Business School.

The Exposure to a Bigger Canvas and the Spark

After completing her bachelors with flying colors, Sandberg went on to pursue M.B.A. at the Harvard Business School. It is during this period that she met the then professor, Larry Summers, who would go on to become the U.S. Treasury Secretary. Mr. Summers was Sandberg’s mentor and thesis advisor at Harvard. This association was to prove very decisive for the aspiring young lady when she took to the path of a professional career after completing her education.

For when Larry Summers went on to become the U.S. Treasury Secretary, in the Bill Clinton administration, he summoned the promising young lady from Harvard Business School whom he had mentored, to come join as his chief of staff. For the 2 years that she worked with the treasury, she did well enough to establish her credentials. She helped lead the Treasury’s work on forgiving debt in the developing world during the Asian financial crisis. And then, when she as recruited summers’ research assistant at the World Bank, she worked on health projects in India dealing with leprosy, AIDS, and blindness.

A little before that, she had joined one of the world’s leading consulting firms, McKinsey & Company after graduating from the business school, as a management consultant, the experience of working for such a global and renowned company gave her exposure to the greater aspects of running businesses and operations.

So, after her brief stint with the World Bank, she joined Google in 2001.

The Ascent of the Rising Star

Her association with Google truly brought forth the management champ in Sandberg that was raring to go. This was a God-sent opportunity for Sandberg to put to test all her education, knowledge and skills and prove to one and all that women are, if not better, as good as any when it comes to taking on the challenges of the unrelenting business world.

Of course, the fact that she had joined a pioneer whose very fabric was path-breaking also helped her do well in her job as the vice-president of its global online sales and operations. She set up Google's Global Online Sales and Operations unit, which handles the web-based systems that small and midsize businesses use to buy Google ads. According to estimates, the ad-sales team oversees the majority of the company's revenue, which under Sandberg’s able guidance and leadership the unit sold ads to 99% of Google's advertisers during the time she was at the company. Sandberg’s team's central challenge was the same as ever: managing the fast pace of growth in advertisers, revenue and staff which she did with planning, strategy, and implementation in a synergized way that has proved to be the reference point for many other followers of the practice. She also was involved in launching Google's philanthropic arm Google.org.

After about 8 years at Google, she was considering becoming a senior executive for The Washington Post Company. But a chance meeting with Facebook founder & CEO, Mark Zuckerberg during a Christmas party changed her career-course yet again.

After spending some more time understanding her capabilities (during the World Economic Forum at Davos) Zuckerberg brought her on-board in March 2008.

She has been serving as the chief operating officer of Facebook ever since. In June 2012, she was also elected to the board of directors by the existing board members, becoming the first woman to serve on its board.

Apart from her primary role as COO of Facebook, and her directorship which gives her a chance to be involved in the decision-making process of the company, she also serves various other companies and institutions under different capacities. In 2009, she was named to the board of The Walt Disney Company. She also serves on the boards of Women for Women International, the Center for Global Development and V-Day. She was previously a board member of Starbucks, Brookings Institution and Ad Council.

The economist and feminist in her was still not completely content with the inadequate respect and authority being accorded to women in the business world as indeed in the power circles.

So, apart from doing what she can in her power like the many philanthropic activities mostly aimed at women’s issues, she decided to express her ideas and thoughts by way of articles and books. Her maiden book, Lean In: Women, work, and the will to lead, was released in 2013. The book said to be an expression of the way she is as a person —super smart, hyper articulate, charismatic yet vulnerable.

One of few prominent women in the technology sphere, Sandberg has become the torch-bearer for a generation of women hoping to balance high-profile jobs with motherhood, an increasingly fraught issue in 2012.

She married David Goldberg who was a vice president of Yahoo! after her first marriage ended in a divorce. The couple has two children.