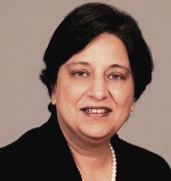 Maintaining work-life balance isn’t easy, especially if you are as ambitious as I am…

She aspired to get into a field which has historically been male-oriented. She educated and groomed herself to face the pitfalls of the marketing sphere because she was convinced that it was her calling. But the people who mattered i.e. the potential employers of her youth – the Hindustan Levers (now HUL) and Asian Paints did- not think so. Or may be they did, but just lacked the foresight to spot the spark in the budding professional and aspiring marketer. And why? Apparently, because they could not accept a woman donning the role of a hard-core marketer, which was considered, at least back then, to be quintessentially a man’s job. She felt like she was being scorned for no fault of hers.

But Neelam Dhawan was made of sterner stuff than most people, including men, of her time had demonstrated. She didn’t let go off it so easily. The burning desire to succeed in a field where no woman had dared to venture into in India, and the unbridled ambition to scale the heights of the then nascent IT industry in the country, ensured that she did what she was destined to be. In fact, one can even say that she scripted her own destiny.

She was the face of Microsoft (India) for as long as she was there – no mean achievement for a person who happened to have gotten into IT accidentally because people in her field, FMCG and, marketing especially – had shut the door on her face. She did eventually get to don the role of a marketer but in a different field: The software & IT services industry.

Her parents did not think there was a difference between their girl child and the boys. They never did; until it crossed their mind that their darling daughter was facing rejection and losing job opportunities just because she was a woman. But long before all this was to transpire, they gave her the best of education possible. Dhawan completed her Bachelor’s in economics (1980) from the esteemed St. Stephen’s College, Delhi, which boasts of many renowned alumni. The confidence imbued in her by her parents made her think unconventionally, and go for things that she wanted to do. She then pursued her M.B.A. in marketing management – something which generally women of those days did not with as much enthusiasm or confidence as they did for other vocations. She completed her M.B.A. from yet another famous institution - Faculty of Management Science, New Delhi, in 1982.

The scorn that sparked the fire

Back in her college days Dhawan had neither imagined nor did any one – her family, mentors, or her teachers even- had suspected that the simple matter of her being a woman would prove to be a huge obstacle in the young lady pursuing a career in the field of her choice. So it was then, that she went to what were the marquee names in FMCG – Hindustan Level (Hindustan Unilever of today) and Asian Paints, both of whom had reportedly refused her a place into their marketing scheme of things.

But she was absolutely sure and strongly determined to prove them and everyone else wrong. More than that, she wanted to prove to herself what she had always believed to be her strengths – marketing. Or why else would she have chosen to study marketing management in the first place?

Undeterred and unwilling to throw-in the towel, instead of feeling all lost and dejected, she found the only way available to her at that point in time to make good of her life. Importantly, make good of her education and her passion.

Being the progressive thinking woman that she was to prove to one and all in the later years, she joined HCL – the hardware and IT services company. One would imagine that this could not have gone down well with her family and friends – given the fact that IT was then a literally unknown commodity and no one would have bet for it to grow into the proportions which it eventually did in the following three decades.

One can safely say that, like most people in the 1980s, Dhawan also perhaps did not foresee such phenomenal growth and expansion of the industry. She joined HCL because it presented her the opportunity to hone as well as, eventually, put to use her marketing skills.

So, after joining HCL as a trainee, and overcoming the ignominy of being shunned by premier companies in the field of her choice (FMCG), she went on to work for HCL for the next decade-and-a-half (14 years to be exact). Along the way, her career also progressed in an upward trajectory like that of the company. As the company grew and started making its presence as a serious player in the domain, Dhawan was convinced that this was where she needed to be. In fact, it was a different kind of marketing challenge that she never really thought could test her education, skills (people, management, marketing, leadership etc.), acumen, and everything else she had learnt or possessed.

Here was an opportunity which would not only give her career a real fillip but also provide her ample avenues where she can employ her sales and marketing skills.

A decade-and-a-half at a single company which plied its trade in a field which was more uncertain than anything else in the 1980s, proves the point that Dhawan quite liked the idea of the industry. She could rightly envision the promise that lay within the uncertain future of the information technology sphere. She was now, after having learnt the nuances of sales and marketing for fourteen long years at HCL, more than ever before, sure of where she wanted to be: marketing in the IT industry.

So, it wasn’t surprising that she worked for Compaq for six years before joining the father of them all, IBM where she remained for four years during which she was a vice president and a member of the company board of directors. This quantum leap did not stop there. Her success with those two companies brought her much renown and goodwill with many technology majors.

She joined Hewlett-Packard for the first time in 1999 as its Vice President of the Customer Solutions Group. Her ascent had well and truly begun with this leap from a virtual unknown company to a top management position in a multi-national company; and a leading one at that.

Icing on the Cake

Then came her stint with Microsoft (India), in 2005. Upto this point in time, she had been associated with the hardware business – selling hardware products or end-to-end projects. However, at Microsoft, in her role as head of sales and marketing operations, she was exposed to the other aspects of the IT business. She learnt how to interact with both channel partners and customers alike, besides learning about managing people and how to drive home the importance or the value of technology.

Her impact on the company in this role can be gauged from the fact that Microsoft India was recognized as Subsidiary of the Years in the APAC region by Microsoft Corporation in 2005-2006 – in merely a year after she assumed the responsibility. What’s more, she was soon to become known as the face of Microsoft India for its customers – even as there existed along with her in the company many stalwarts.

She would eventually go onto to become the company’s managing director (India) before deciding to go back to the area of the technology business she liked most –hardware.

The second innings and its troubles

And what better place to do so than the company where she learnt and sharpened her skills and fine-tuned her approach in facing the next challenge in her long and illustrious career in the IT industry. But this time round she joined HP in a much powerful as well as equally demanding role: as its managing director. Power came with brand HP whose day-to-day operations she was to look after as its MD, and challenging because, unlike her earlier associations with HP, and Compaq and HCL – now the company was faced with so many adversities. From ever-growing competition to a falling dollar value, everything seemed to be heavily stacked against her.

But she did not budge, and responded in a way only leaders with caliber and ambition do. And she did not require to go far to look for inspiration. HP global boss, Meg Whitman, herself is a role model for hundreds of women professionals, leaders, and entrepreneurs.

She has been on HPs board since joining back in 2008, and has successfully overseen the revival of the company when things had just started to go astray amidst a combination of factors not exactly in its control. She oversees a huge and ever-expanding portfolio that includes software engineering, research and IT services.

She has been a Member of the Supervisory Board at Koninklijke Philips Electronics NV since April 2012, and also serves as a Director at HP India Pvt Ltd.

Dhawan is married to Atul Dhawan who is a partner at Deloitte-Haskins. Besides her ever-doting and supportive husband, she feels fortunate to have been blessed with a family that is as understanding as hers. Her mother-in-law, a career-woman herself, quit her job in order to look after Dhawan’s second child, so she (Dhawan) could continue with her career.