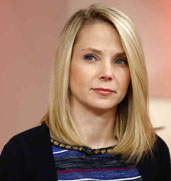 I think my priorities are… God, Family and Yahoo in that order….

She is the youngest CEO of a Fortune 500 company (one of the only 20 female CEOs in charge of a Fortune 500 company); was named to Fortune magazine's annual list of America's 50 Most Powerful Women in Business for 4 consecutive years (2008-2011) – the youngest ever woman to be included in the list (in 200); was named one of Glamour Magazine’s Women of the year in 2009; was a long-serving top executive at one of the world’s most innovative technology companies (Google); she may not appear like one but is definitely an innovative champion; and she was asked to assume the mantle of taking forward another technology major – which was, at one point in time, in direct competition to the company she then served. And, words fail one to describe the fantastic achievements of this young and fastidious leader. If you are wondering can this be true, then read on.

Marissa Mayer was born (May 30, 1975) to an art teacher mother and an engineer father in Wausau, Wisconsin. She had her schooling from the Wausau West High School. Her small-town childhood was complete with ballet lessons, ice skating, Brownies and debate team competitions. Although, it is understandable that being the daughter of such erudite couple, she would be driven towards the quest of knowledge, but being a girl her inclination towards science was quite unusual. Inspite of her affinity toward math and science, she wanted to be a doctor. But fate had other ideas. Her passion for computers and technology prevailed over her interest toward the medical profession. So, instead of ending up as a medico, she completed her B.S. in Symbolic Science and M.S. in Computer Science from Stanford University – specializing in artificial intelligence for both the degree.

School Sparked It All

The Wausau West High School helped her find her passion and taught her the value of being well-rounded – something that she tries to identify in every recruitment made by Google and now Yahoo! While she was studying there (at school), she worked at a local grocery store, memorizing the prices for hundreds of items in order to streamline the checkout process. The fact that she was selected by the governor of her home state, Wisconsin, as one of the state's two delegates to attend the National Youth Science Camp in West Virginia at the age of 18 years (1993), is hint to the spark that eventually led her to become top leader that she is today.

She started her career by teaching undergraduate courses in computer programming, earning two teaching awards for her contribution to undergraduate education. Then she joined SRI International in Menlo Park, California, followed by a stint at the United Bank of Switzerland’s (UBS) research lab at Zurich – which is reported to have helped her get 14 fresh out of grad school.

The Journey With Google

The 14th one was from Larry Page and Sergey Brin – that famous duo who founded Google, and who quizzed her about artificial intelligence during the interview. So, it was baptism by fire for Mayer. But she did well, and joined Google in 1999, when it nowhere near the search behemoth that it is today. Mayer was one of the first employees of Google. She oversaw Google’s flagship search business – its most profitable unit, for years and most recently has led the location and local division; she’s also always been one of the company’s best spokespeople.

She was involved in some of the company's most recognizable and successful products, including Google Maps, Google Earth, Street View, Google News and Gmail. Mayer is widely credited for the unique look and feel that has come to characterize the Google experience (remember the "doodles" - the custom logos commemorating holidays and events appearing on the Google home page?).

Joining Google at a very young age of 24 years (1999) as employee #20, she is known to have been a great product person, very innovative and a real perfectionist who always wanted the best for users. Her work in production development largely contributed to the site's unique look and feel.

After 13 long years at the company that has revolutionized everything from how people and businesses carry their life with the help of the internet to just about anything, she decided it was the right time to move on in 2012. What, perhaps, catalyzed this decision was the fact that over the past year she never seemed to find a place on CEO Larry Page’s senior leadership team. And this was perhaps an indication to Mayer that she had hit the roof as far as her growth at Google was concerned. Therefore, when the opportunity came to take up the top position of Yahoo! – she didn’t bat an eyelid before saying yes. She is believed to have resigned immediately – via phone, and joined Yahoo! the following day – Google will most definitely miss her talents.

Her Ascent, And The Challenge Of Yahoo!

Her track record at Google of being a visionary leader in user experience and product design, and that of being one of the most exciting technology development strategists of our times, led the board of Yahoo! to zero-in on Mayer as the replacement for her reportedly tainted predecessor at the company.

Although she is yet to prove whether or not she can have the same effect on Yahoo! that she did on Google, there can be no doubt that she will leave no stone unturned in bringing a transformation to the once pioneering tech super-power.

The challenge of reviving the fortunes of Yahoo! one of the pioneers of online search, and an industry leader up until Google surpassed it in the mid-2000s, is immense. She needs to contend with mountains of problems. She must restore Yahoo’s ability to innovate, repair its image with advertisers and customers, and inject some energy into the depleted work force, which has been bruised and battered by layoffs and a plummeting stock price. Employee motivation, share-holder confidence, priming a hugely bloated infrastructure, and above all, the mission of the company seems to be failing to register in the minds of everybody attached to or interested in the company. She needs to redefine all that and much more, if she has to leave her mark of leadership on Yahoo!

She is quite capable of it – after all, she is the one who lead so many innovations, oversaw their roll-out and successful adoption at Google. The signs are encouraging from a general point-of-view: she brought in a new chief marketing officer and heads of sales and HR, among other executives.

Mayer has demonstrated a lot of courage and decision-making. She's dealing with problems no one wanted to deal with before. One of them is to correct the work culture at the company, and she started with the work-from-home (WFH) arrangements popular at Yahoo! While she is known to be happy to give employees standard Silicon Valley benefits like free food and free smartphones, what she abhors is this hiding work culture. So, did away with that by announcing no work-from-home: you better come to the office and work or the door is shut for you. This move, although, generated some adverse response from watchers and well-wishers alike, has also facilitated addressing another problem, ever so inadvertently: that of lay-offs. The Yahoo! infrastructure is so bloated and unmanageable, that culling was absolutely necessary. In fact, it was long over-due – but no one in the hot seat ever took the courageous decision. But Mayer did. She was groomed to handle such things very easily at Google, where she personally oversaw recruitment of talent – almost even perusing resumes of candidates.

This was also important because if Yahoo! is to climb out of the crisis, then team-Yahoo! – the whole of it, needs to be working as a closely-knit and cohesive group. If suggestions that some employees exploited, abused even, the liberty of working from home, are to go by then Mayer has hit the nail absolutely on the head of the problem. And how has she demonstrated this: leading by example – she resumed worked only after two weeks of giving birth to her baby boy!

This will either compel the employees to come back to office and work with the team or, get laid off – that is quit on their own – saving Mayer the ignominy of enforcing lay-offs. This may also prove to be counter-productive – if some of the best talent that Yahoo! has been able to hold on to, despite a deluge of like companies promising much more, takes the exodus path.

Her WFH ban may not exactly endear her to many employees, but almost every one of those employees will appreciate the fact that here is one leader who is showing clear direction and is bold enough to take difficult decisions. We all like such leaders, don’t we? Whether this action will achieve her intent of re-igniting the fire of innovation amidst a sagging employee morale continuum, or further dent their confidence in the company’s future, is a matter best left for time to decide.

Mayer is married to lawyer and investor Zachary Bogue and the couple have a baby boy.