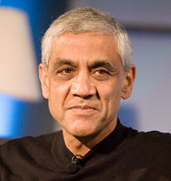 This week in the spark of the corporate section we will be putting some light on IT man of 80’s.

Vinod was born on 28th January 1955 in Delhi; he comes from an ordinary middle class background. His father was in army. At the age of 16, Vinod Khosla read about the founding of Intel. This motivated him to nurture dreams of starting his own technology company.

He has done his Masters in Biomedical Engineering from Carnegie Mellon University and Stanford Graduate School of Business (MBA).

He started a soy milk company to cater to those people in India who did not have refrigerators. But his venture failed.

After that he attempted to start his own company in India, a dream since the age of 15. Being frustrated by the experience, he gave up his mission. Then he went to United States and completed M.S degree in Biomedical Sciences at Carnegie Mellon and also earned an M B A degree from Stanford University in 1979

Vowing to become a millionaire before 30, ambitious Khosla found a business idea and partners from Standford business club. They found Daisy Systems, a computer-aided engineering and design company, but failed quickly because the economics of the market went against it.

At the tender age of 30, with two big successes under his belt, Vinod could have retired, but in 1986, John Doerr convinced him to join Kleiner Perkins

It started as a part-time job, but soon he became a general partner and Forbes was calling him a “superstar VC.” But to this day, Vinod does not call himself a “venture capitalist.” He refers to himself, instead, as a venture “assistant” or coach. At Kleiner, Vinod often put less than $1 million into a venture, believing that it’s the ideas and team that matter more than the money.

Vinod was among the first to recognize that internet technology and fiber optics would unleash an explosion of productivity by making communications fast, cheap and easy. His half dozen best deals turned $50 million of his firm’s investments into $15 billion

During the time in KPCB, Khosla has played key roles in starting companies that are involved in multimedia, semiconductors, video games, Internet software and computer networking. He conceived the idea to optimize SONET for data, a scheme that led to the creation of Cerent Corp, a telecommunications-equipment company which Cisco acquired in 1999 for $6.9 billion.

Khosla was also instrumental in launching Juniper Networks, a company many thought as the next Cisco. Others include Viant, Extreme Networks, Lightera etc. Khosla has won admiration because of his ability to build and fashion companies and technologies. He plays an active role and is not satisfied to sit back and let others work the plans while he approves the progress. Though he was successful in almost all his ventures, there has been one time that Khosla had been wrong. He backed 3DO Co, a game-maker whose shares now sell for a fraction of the initial offering price in 1993.

Vinod Khosla also challenged Intel's monopoly by developing Nexgen/AMD. He also conceptualized the idea and business plan for Juniper to take on Cisco's dominance of the router market. Vinod Khosla is also one of the founding fathers of The Indus Entrepreneur (TiE), a not-for-profit global network of entrepreneurs and professionals founded in 1992.

In 2004, he started his own firm Khosla ventures and focused on venture investments in technology sectors especially in clean technology.

He started his own venture capital firm Khosla Ventures in Menlo park, California in the year 2004 and invested $ 1 billion. In September 2009, he raised funds for his cleantech and information technology start ups.

Vinod Khosla has a keen interest in nascent technologies that can have a beneficial effect and economic impact on society. Presently, he is looking into practicality of the use of ethanol as a gasoline substitute.

Khosla's current effort is funding and managing application service provider start-ups. He is the chairman of two such firms, Corio and Asera. This much respected entrepreneur lives in Woodside, CA with his wife and four daughters. Khosla believes in closeness in family. His rules for life include having breakfast and dinner with his family. He is one of three billionaires of Indian origin in Forbes magazine’s list of America’s richest 400 people.

In 2004, Vinod left Kleiner and started Khosla Ventures to pursue what he calls “crazy science experiments”– ideas too imprudent for the traditional venture capital investor.

Looking at their website, you can see what’s important to them, reflecting Vinod’s personal approach to investing.

Vinod’s focus on green technology dates back to 2001. He has personally invested in some 45 companies pursuing solutions ranging from ethanol made from wood chips to solar thermal plants and cement, whose manufacture absorbs rather than spews carbon dioxide.

Vinod was also fascinated towards politics and public policy when he funded California’s Proposition 87, known as the Clean Energy Initiative, which failed to pass. Prop 87 was a solar energy initiative which taxed oil drilling and used the revenue for alternative energy projects.

His wife’s name is Neeru she is the co-founder and Chairperson of the CK-12 Foundation. Started in 2006, CK-12 works to make textbooks available worldwide to K-12 students.