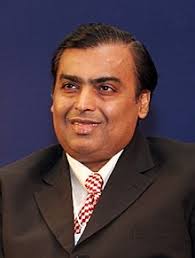 The Indian business magnet, Mukesh Ambani is the chairman and Managing Director of Reliance Industries, which is a Fortune 500 company and with respect to market value, is considered as the most valuable company of India. Mukesh is the largest shareholder of Reliance Industries. Mukesh always believed in the principle that everybody should contribute to the business and should not heavily depend on the selected few individuals.

Mukesh says “We are committed to connecting everyone and everything, everywhere always with the highest quality and the most affordable price”. Mukesh Ambani initiated Reliance’s backward integration journey – from textiles to polyster fibers and further onto petrochemicals and petroleum refining and exploration and production of oil and gas. Mukesh Ambani has been titled as the World’s Richest Sports Team Owners on his purchase of IPL Cricket Team of Mumbal Indians.

Mukesh has started working with his father in their family business since 1981, immediately after his return from Stanford. He was held responsible for Reliance backward integration, which includes owing of the suppliers by the company in order to generate more revenue and improve the efficiency. From his first day at Reliance, Mukesh was been given the opportunity to contribute to the company. Due to ill health of his father, it was in 1986 that the complete responsibility was being shifted to Mukesh and his brother Anil.

Later Mukesh Ambani has set up Reliance Communications Limited, focusing on information and communications technology initiatives. His father treated him as a business partner and allowed him with the freedom to contribute even with little experience. At the early age of 24, he was given the responsibility for the construction of the petrochemical plant where the company was planning to make heavy investments in oil refinery and petrochemicals.

Mukesh Ambani is the member for different forums, boards and councils ...

• International Advisory Council of The Brookings

• Board member of the Interpol Foundation

• Board of Governors for Institute of Chemical Technology

Mukesh Ambani is the elected Foreign Member of the prestigious United States National Academy of Engineering.

Reliance Industries are mainly into refining, petrochemicals, and in the oil and gas sectors. Its subsidiary, Reliance Retail Ltd, provides products and services like Telecommunications and Retail markets and is India’s largest retailer. Mukesh Ambani has created the new world-class manufacturing facilities which include diverse technologies which have lead to increase in the manufacturing capacities from less than a million tones to about 21 million tonnes per annum. Mukesh Ambani also led the development of the infrastructure and organized retail network spanning multiple formats and also the supply chain infrastructure. This innovation has made Reliance Retail as the India’s largest organized retail player.

In some of the key domains of national interests such as like education, healthcare, security, financial services, entertainment Mukesh Ambani has tried to address the entire value chain across the different digital services by offering end-to-end solutions by establishment of the world’s most expansive 4G broadband wireless network.

The launch of the 4G phone service Jio by Mukesh has made Reliance to spark a price war in India’s hyper-competitive telecom market. For Mukesh, Jio is not just another business, but it is a mission to transform India and to transform Odisha. Mukesh always works with an aim of resolving and ensuring that India should rise from its 135th position and should be among the top three countries with respect to fixed broadband in the next few years.

By nature, Mukesh Ambani is very quiet, modest ad shy person. He always makes a top priority to spend quality time with family. Mukesh Ambani states that India will demonstrate “greatest digital transformation” in the world history and insist that all the entrepreneurs that are looking out for a position in the market need to develop an ‘India First’ vision. To achieve this, Mukesh opines that reinvention is required for growth and to nurture in the market to its full potential. This can be achieved with grand coalition of each and everyone in the industry, the government, the society as well as the citizens.

Mukesh has also committed to invest 3,000 crore rupees in odhisa over the next three years with the aim of taking the power of digital to every nook of the state. He has already invested 6,000 crore in Odhisha. Reliance and Jio are working as dependable partners in Make New Odhisha vision. With this investment, Mukesh has created employment opportunities to almost 30,000 people, both directly and indirectly.

Mukesh is enabling his company to work on creating the world’s largest online-to-offline commerce platform by which the lives and businesses of the country are transformed. Vision of Mukesh Ambani is to double or even more than double the size of Reliance by 2025.

The success of Mukesh Ambani was tremendous and was at very fast rate. The success has increased after the release of Reliance Jio, which provided a great quality service to the users at cheaper rates. This has also increased the value of the Reliance shares. Mukesh has announced the country’s largest bonus issue. In February 2018, The Robin Hood Index of Bloomberg has estimated the wealth of Mukesh Ambani was sufficient for funding almost 20 days operations of the Indian federal government. Mukesh is the world’s 11th richest person. The increase in the wealth is primarily due to the excellent performance of the shares of Reliance Industries. The total net worth of Ambani as on October 2018 is about 41.5 US billion dollars.

Mukesh Ambani has created global records in the customer acquisitions for Jio Reliance’s digital services initiative. Under the leadership of Mukesh Ambani, Reliance Jio, which was launched public in the year 2016, has managed to earn the top five spot among the telecommunications service providers of the country.

Experiencing the successful leadership of Mukesh Ambani and by building trust and confidence on his leadership, shareholders of Reliance Industries (almost 98.5%) have agreed and approved for extension of Mukesh Ambani as the Chairman and Managing Director of the company for further five years.

• In 2010, Asia Society has awarded Mukesh Ambani the Global Vision Award at The Awards Dinner.

• NDTV India has awarded the Business Leader of the year for the year 2010.

• Financial Chronicle has awarded as the Businessman of the year for the year 2010.

• Mukesh Ambani was felicitated with the Scholl of Engineering and Applied Science Dean’s Medal by the University of Pennsylvania in 2010.

• The Business Council for International Understanding has awarded Mukesh Ambani with the Global Leadership Award.

• The All India Management Association has awarded Mukesh Ambani as ‘Entrepreneur of the Decade’.

• Boston Consultancy Group has awarded Mukesh as ‘Global Challenger’ for the year 2013.

• NDTV has identified Mukesh Ambani as one of ’25 Greatest Global Living Legends’ for the year 2013.

• In 2015, the Institute of Chemical Technology has awarded with Honorary Doctor of Science.

• In 2016, Mukesh Ambani was honored with Othmer Gold Medal by the Chemical Heritage Foundation.

• In 2017, Mukesh Ambani was featured on the Forbes Global Game Changers List, turning out to be the only Indian to be featured.

• In 2017, Economic Times has awarded the Business Leader of the Year.

Mukesh has received his BE degree in Chemical Engineering from Institute of Chemical Technology in 1970s. Mukesh has also enrolled for an MBA at Stanford University but withdrew to help his father in building of Reliance, which was a small but a fast growing enterprise during that time. His father believed that real life skills were harnessed through experiences and not in the classrooms and hence has called Mukesh back to India from Stanford. He is married to Nitu Ambani and they have three children.