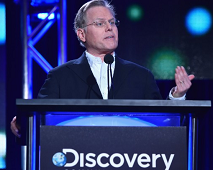 Having discovered his passion for cable business, a young lawyer decided to say good bye to his secure job at the law firm and chased his passion developing a career along with cable TV industry. That early career risk set David M Zaslav up for success. Before being the CEO of the renowned entertainment company, Discovery Communications, in 2007, he enjoyed an extensive career in the media industry spending nearly two decades working on a wide range of projects at NBC, including the launch of CNBC, MSNBC and others. One of the highest paid CEOs in the US, his leadership has taken his company to the top of the ratings. He has been recognised with several awards for his career achievements and his generous support of the television industry. He has left no stones unturned in placing the Discovery Channel group in the driving seat in the world of reality television.
The move from law to cable business...
At a time when the cable television business were at their infancy stage, the Brooklyn-born Zaslav who was so passionate about television was working in entertainment law as an attorney in a prestigious New York City law firm of LeBouef, Lamb, Leiby & MacRae in 1985. He got an opportunity to work as a fill-in lawyer for Discovery which was then a small cable channel for nature and science shows. Zaslav got to travel around with Discovery's founder, John Hendricks and watching him convince the cable operators into carrying the fledgling network, Zaslav was bitten by the cable bug.
When he saw the cover of a magazine with Bob Wright and Jack Welch, the former GE CEO which said that GE and NBC wanted to get into the cable business, he wrote a letter to Wright expressing his interest to join the ride, if they are going to get into the business. The honesty and the passion coupled with his stint with John Hendricks favoured him. He then changed the professional tracks to follow his dream and helped Wright launch CNBC. The decision though ended up in a substantial pay cut by reducing his income by 50 percent, he says, is the best one he has made in his life.
NBCUniversal...
Zaslav's association with NBC went on for close to two decades. Before stepping down after 18 years, Zaslav went on to become the chief of NBC Universal Cable. He played a major role in launching and marketing MSNBC, the History Channel, Sci Fi, the Sundance Channel and National Geographic. During his tenure as the President of Cable and Domestic TV and New Media Distribution, he was in charge of content distribution to all forms of TV, overseeing programming on all of NBC's sister networks from Bravo to USA, creating alternative viewing programs like video-on-demand, leading negotiations for cable and satellite carriage of NBC Universal networks and brought new media partnerships, including a video-on-demand deal with the leading cable operator, Comcast to the table.
Discovery...
The NBC veteran joined the cable conglomerate giant Discovery Communications in 2007 replacing the longtime CEO Judith McHale, where he took charge of Discovery DISCA. DISCA had 13 channels in the U.S. including Animal Planet, TLC, OWN and the Discovery Channel back then. His appointment was at a crucial time amid speculation on Wall Street. His initiatives were focussed on growth, performance and operational efficiency.
Overseeing Discovery’s global suite of media brands across all platforms, this high powered CEO transformed Discovery and positioned it in an altogether different orbit. Poor performing Discovery Home against HGTV, was turned into Planet Greenland Discovery Times to documentaries and New York Times content, into the ID: Investigation Discovery network. He built Discovery’s international footprint and superfan brands, including, ID and OWN. Discovery expanded quickly under him. He spearheaded the diversification of Discovery with investments in kids in Latin America and sports in Europe, Eurosport, Home of the Olympics across Europe and was in the forefront for  Discovery’s digital pivot, creating short-form leader Group Nine, the Eurosport Player streaming service, TV-Everywhere service GO and TEN: The Enthusiast Network, a leading digital platform for car fans. Also, it was under his leadership that Discovery went public in 2008 trading in on the Nasdaq stock exchange making it's way to the Fortune 500 in 2014. The 2013 acquisition of SBS Nordic, a top-three portfolio of television brands across Denmark, Norway, Sweden and Finland featuring leading nonfiction content, locally produced entertainment programs and scripted series expanded the international operations of the company. A true visionary in the media industry, his leadership led to the launch of some of the fastest growing cable networks in the U.S., including Investigation Discovery, Velocity, Destination America and American Heroes Channel.
Today, DCI channels include Discovery Channel, TLC, Animal Planet, Investigation Discovery, OWN: Oprah Winfrey Network, Science Channel, Discovery Family Channel, American Heroes Channel, Velocity, Destination America and Discovery Life Channel, and two Hispanic brands, Discovery en Español and Discovery Familia. Under the current contract, Zaslav keeps running the world’s top nonfiction media company through Dec. 31, 2019. While at the helm, he built a strong management team, increased its market share, and created a bigger, stronger portfolio of brands.
Personal life...
Born and raised in the suburbs of New York, he played tennis as a child. A competitive tennis player in high school, he went to college to play tennis and become a professional tennis player. He holds a degree in Science from Binghamton University. He then studied law at Boston University School of Law earning a Jurus Doctor  law degree with honors.
One of his favorite books is Binion’s World Series of Poker by James McManus. His favorite television show outside Discovery network is Saturday Night Live. He is married to Pam Zaslav and has three adult children.
His two cents for the future executives...
Associations and memberships...
Awards and accolades...
Quotes...
Hope readers caught up the spark...