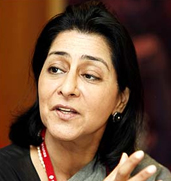 A prominent personality of the corporate world, she is the first woman to guide the functioning of a foreign bank in India. At present, she is working as the Group General Manager and Country Head of HSBC India. Well, we are talking about the corporate diva Naina Lal Kidwai. In this article, we will present you with the biography of Naina Lal Kidwai.

This woman is truly amazing and very inspiring. Naina Lal Kidwai, she in a true sense an economist and the leader not just in the financial world but in general world also. She has a magical aurora around her, an inspiring thought process and dedication for work, her family and almost everything she loves.

Naina is the woman full of zest that is in a way very platonic and she has deeply and thoroughly given time to make and understand rules of her life. The clarity, for what she wants in life, is like the crystal clear water. That is why Naina is at the helm of the Chief Executive Officer of Hong Kong and Shanghai Banking Corporation in India.

Her strong position and that too in one of the world’s biggest Banking Organizations has made her a famous personality and listed her once third most influential women in the Asia in 2000 and 2001. She was also counted amongst the top 50 women in international business in 2003.

She was born in the year 1957. Raised in Mumbai and Delhi, she did her schooling from Simla. Alumna of Delhi University, she is the first Indian woman to have graduated from Harvard Business School. She is among the top business women of India, who have made it to the top with their constant hard work and sincerity.

She began her career in the year 1982, when she joined the ANZ Grindlays Bank, which is now known as the Standard Chartered Bank. She took up a variety of banking assignments before moving to Morgan Stanley's India operation. She kept climbing the ladders of success. She played an important role in NYSE listing of Wipro. She was instrumental in facilitating the cellular phone services nationwide through a deal involving the Tatas and Birlas. She became the Managing Director of the HSBC bank.

In the year 2000, the Fortune magazine declared her as the third most powerful businesswoman in Asia. She is the mother of two children and is maintaining a great balance between work and home. She is very fond of Indian classical as well as western music. She loves to go on trekking tours to the Himalayas. She is a nature lover, who has a keen interest in observing the wildlife. For her praiseworthy work, Naina Lal Kidwai has received many accolades. Her commendable work has been given due recognition by honoring her with the Padmashri award.

She strongly believes that woman has the power and this power is pushing them to realize these wilder dreams into reality. According to Naina this can be supported by the facts that earlier the corner offices highly reserved for the men, but now the time is changing and the most obstinate glass barrier have been broken by entering of the woman in every sector of the world.

This has been unprecedented and now women are there in the finance and banking sector and occupying the top notch position. Earlier woman has been confined to the four wall of the home but now they are ruling the multinational which have spanning there work across the five continent of the world. The magnitudes of these businesses have been huge and they have been doing it successfully. Even in the developing countries like India women are playing a pivotal role by working at the grass-root level to top from microfinance to big financial institutions. You name any organization and you will find the women out there making some very positive contribution.

Her determination and passion for the work is the secret of this world’s most powerful and influential person in the finance business. According to Naina she has been fortunate enough to work in the stream she has great passion and this is driving her to work diligently.

She is the one who rekindle fire in her for work tirelessly for achieving the result and why not after all she has been in a business on her own choice rather than the being in the work she has been doing out of some obligation.

Was she like this always in her life? Well precisely yes. If we beckon at her life history we would find that she was from the family of achievers. She has been a begetter and like father like son saying goes here. This daughter of CEO of the leading Indian insurance company once sat on the swivel chair of her father and since then the desire of heading the company has fitted in her mind.

Besides her father her sister became one of India’s top golfers, and her husband, Rashid K. Kidwai was the managing director of Digital Partners, a nonprofit organization. However, this girl was a legendary figure right from her school and college day.

Her life long friend Mira Nair once told that when she met Naina in the school for the first time, she was very formidable. She was an active debater, always stands first in her school, representing the school in every sport.

At the early age of 16, Naina has decided that she would be in the business which at that time was considered the stronghold or the bastion of the male. Then she completed her degree in economics from the Delhi University. In the college also this girl was quite active in the co-curricular activities and others. She was elected the president of the student union in DU and won the award of leadership.

She completed her chartered accountancy courses before applying to Price Waterhouse as a trainee in 1977. One of the partners told her that since there were no other women in the firm, they did not quite know what to do with her. However, this didn’t deterred this woman and she remained there in the Price Waterhouse for three years as an independent auditor and examining clients accounting and finance records to ensuring their compliance with established controls, policies, procedures and laws.

However, she analyzed here that in this male dominated environment only way to go upwards in the organization was to accouter her with more degrees..

In 1982 she became the first female from India to earn an MBA from the prestigious Harvard Business School. After the completion of her MBA she decided to come back to country leaving many lucrative offers in the United States of America.

She came to India to prove herself and women in general that they are equally tough and they can be fit in any position provided they are being given opportunities to rise in their life. Now, because she accepted that challenge in her life we are having the woman Chief Executive Officer in HSBC, India.

Kidwai was called self-motivated, confident, and a shrewd negotiator. In 2003 she was estimated to be the highest-paid banker in India. She received numerous national and international honors. In 2002, Time magazine selected her as one the 15 most-promising young executives (the "global influentials"). Fortune magazine and India's Business Today put her on their lists of the most powerful women in business. Yet she always gave credit for her success to the teams she assembled. "Investment banking is about getting people with various dimensions and skill-sets together," she explained to India's Business Today (November 23, 2003). "I believe the credit goes to the teams I have worked with," she told the Times of India. "It is never the individual but groups of people who make an idea a success" (October 10, 2003).

Kidwai was active in her community with organizations such as India's Self-Employed Women's Association and Digital Partners, a nonprofit organization managed by her husband dedicated to closing the technology gap between rich and poor. Kidwai told the Times of India, "I am a firm believer in the fact that one must give back to society what one has received" (October 10, 2003).