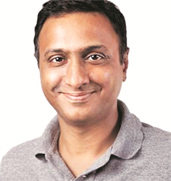 India’s biggest ecommerce platform Flipkart is going through lots of organizational restructuring. Two years back, Sachin Bansal, a co-founder, was succeeded by another co-founder Binny Bansal as the CEO of Flipkart. In January, 2017, another restructuring has been done and Kalyan Krishnamurthy was assigned the role of Chief Executive Officer while Binny Bansal was given the responsibility of overseeing all group companies – Flipkart, Myntra and PhonePe.

Kalyan is regarded as a doyen of ecommerce business. He has deep understanding of day to day businesses in this sphere and many industry analysts believe that he is the best bet Flipkart has if it want to stop the stupendous rise of Amazon in the Indian market.

Kalyan Krishnamurthy has done MBA from University of Illinois and later got another MBA from Asian Institute of Management.

Kalyan Krishnamurthy joined Flipkart last June and is currently heading the Category Design Organization. He replaced co-founder Binny Bansal, who was made the group CEO.

Prior to joining Flipkart, Kalyan Krishnamurthy was the managing director of Tiger Global

According to a report published in Business Standard, Flipkart lost its valuation from a peak of $15.2 billion after several mutual funds marked down the value of their investments in the company, while Bansals struggled to get new investors to maintain lead over Amazon. Along with Krishnamurthy, Binny Bansal mobilised resources to fight back against Amazon’s aggressive push.

He joined Procter and Gamble in the Supple Chain Finance section and started to get attention. eBay poached him from P&G and gave him many tough responsibilities. Kalyan had always justified the trust and responsibility given to him at eBay where he worked for around 6 years in various capacities.

Tiger Global Management, a reputed investment firm based out of New York hired him in 2011. Two years later, Tiger sent him to Flipkart at the position of Head – Category Design. And, now, he is the CEO of Flipkart.

Kalyan Krishnamurthy is considered as the key lieutenant of Lee Fixel – the Chief of Tiger Global, which is the largest shareholder of Flipkart. Lee Fixel is also called as the God Father of Flipkart as he always went a step ahead to keep this Bangaluru based ecommerce venture to alive. However, the mounting losses by Flipkart since last few years had become a matter of concern. Tiger Global can’t see its money getting wasted in such a huge market like India. Binny Bansal was increasingly being seen as a person who doesn’t have business acumen to take on a giant like Amazon. Tiger Global forced the management of Flipkart to accept its man as the CEO who should also be responsible for Profit and Loss of the organization. Being the largest shareholder, it was also not tough for them.

In his first stint starting May 2013, Krishnamurthy, as Fixel’s man on the ground, was initially feared. Pretty soon, however, first as interim finance chief and then as sales head, he won over Flipkart employees with his straightforward personality and deep knowledge of e-commerce.

In his second stint, Krishnamurthy, as de facto sales head, began by removing at least four senior executives in the key but struggling retail business that was responsible for generating sales.

Krishnamurthy’s elevation marks a major landmark for the start-up ecosystem: he has become the first so-called professional CEO at a large Indian start-up. His main objective will be to make the budding Flipkart turnaround last. He’s facing heavy odds. The company needs a fresh round of funds but it struggling to attract new investors at its preferred valuation of $15 billion. Most investors say Flipkart has resigned itself to the dreaded down-round in order to get desperately-needed new capital. They also say that after running neck-and-neck with Flipkart only three years after launching, Amazon, with its established tech and retail expertise, is likely to become the top e-commerce company in India at some point.

For now, Krishnamurthy is driving Flipkart’s operations and the company is still marginally ahead of Amazon at the top of India’s $15 billion e-commerce market.

Krishnamurthy has played a unique role in shaping India’s start-up ecosystem. Despite his sizeable accomplishments, not much is known about Krishnamurthy outside of Flipkart circles and a small group of investors. He works long hours relentlessly, is blunt and ruthless and yet inspires confidence and loyalty. It helps that he’s as fluent in Hindi as he is in English. And in his mid-40s, he’s also nearly a decade older than the Bansals, a stabilizing, predictable presence with a less volatile temper. More than anything, his instincts on e-commerce are uncommonly accurate, these people said.

Not that Krishnamurthy has a spotless record. His business finance and retail teams were at least partially responsible for the pricing fiasco in the first Big Billion Day sale in October 2014, when customers alleged that Flipkart intentionally pushed up the prices of some products so as to make its discounts seem bigger.

When he became Flipkart CEO in January 2016, Binny Bansal inherited a mess. Two of Sachin Bansal’s big bets in 2015—the marketplace push and the app-only experiment—had failed, meaning that Flipkart missed its sales targets in 2015 and saw its losses soar. As damaging was the side-effect of the marketplace push: Flipkart’s vaunted customer service and brand took a beating. Sachin was replaced by Binny as CEO in a move that is now widely seen as having been either pushed by the company’s board of directors or in fear of some drastic action by the board.

In mid-June, Krishnamurthy was appointed as head-category design at Flipkart. Regardless of the strange title, he was given charge of Flipkart’s marketplace and retail business. His mandate was to revive sales growth while keeping spending under control.

His role in Flipkart..

Since starting out in 2007 as an online bookseller, Flipkart had risen to the top by adopting Amazon’s model of selling products directly to customers and having a supplementary marketplace business of third-party sellers who added variety to the company’s product assortment. This allowed Flipkart to control the quality of its products and service, which was crucial in building trust with Indian shoppers who were wary of online shopping (most still are). But inspired by the latest trends in the tech world and his frequent visits to Silicon Valley and China, Sachin Bansal wanted to convert Flipkart into a pure tech platform. In his vision, Flipkart would connect customers with merchants around them through geo-mapping technology, and provide other “soft” services. This vision of tech utopia also prompted his app-only experiment, where he was betting that customers hooked to their smartphones would use the device, which facilitated immediacy, convenience and a superior experience, exclusively for all their commercial transactions.

The chaos at Flipkart reduced significantly after Binny became CEO. But it was replaced by confusion. The company just couldn’t figure how to achieve three clear objectives all at the same time: increase sales, cut losses and improve customer service. Its task was made tougher by the fact that Amazon was pumping in hundreds of millions of dollars.

Krishnamurthy’s exit in 2014 was brought about partly by his clashes with Sachin Bansal. At that time, despite the fact that Krishnamurthy was a Tiger Global representative, Fixel didn’t challenge Bansal, who had consistently impressed him with his vision and performance. After Binny became CEO, many Flipkart executives and the investor community said he was the only one who could drag the company out of the hole it had dug itself into. But five months into the job, there were no signs of a turnaround in sales, prompting the board to bring Krishnamurthy back. After joining the firm, the Tiger man was firmly in charge of most of Flipkart.