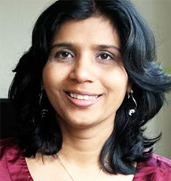 Rashmi Sinha is the co-founder of SlideShare, the place where people connect over content. She describes SlideShare in three words as YouTube of PowerPoint. This designer, researcher, scientist and entrepreneur turned her doctorate to entrepreneurship to live her dreams of doing something creative with the web. She left SlideShare after assuring that Baby SlideShare has grown up to be on its own even in her absence. Today she is having fun experimenting with a few ideas. She has done a few investments as well.

After doing post graduation in Cognitive Science from Allahabad University, she flew off to USA in 1993 where she earned a PhD in Cognitive Neuropsychology from Brown University. It was when she took up some Computer Science courses with Andy vann Dam, the American computer science researcher and professor, that she was exposed to human computer interaction way of thinking (HCI) and instantly fell in love with it. She then wrote a thesis on Cognitive Basis of Categorical Learning.

In 1999, Rashmi moved to University of California, Berkeley for her post doctoral work. She was tired of writing papers and decided to shift gears from academia to create something new on her own.

The Spark and early career...

At University of Berkley, she discovered her love with the web and dug further. She shared her interest with some of the professors in Information science department and got department transfer. She worked on search engines & recommender systems. Though she loved the work, it dawned on her that academia is not her cup of tea. She quite didn't like it's pace. She found that the practical problems are more enjoyable. With her passion to create new things, social software and interface design, she founded Uzanto, a user experience design consulting company. Uzanto means "user" in Esperanto. She was working on a project with eBay when her husband joined her. Working together, her software engineer husband found that the method she used could be translated to a software. This gave birth to MindCanvas.

In November 2005, MindCanvas was released, which is an online game-like software for running surveys and other types of customer research. MindCanvas usage was sold to top companies like Microsoft and Yahoo. But that was just a baby step in the life of this powerful woman entrepreneur.

Rashmi always wanted to do something big; something that would have a broader impact. Brainstorming pitched in many ideas. It was around this time that she and her husband noticed that the there is no site to share PowerPoint presentations unlike photos and videos. The PowerPoint was still shared via e-mail or through pen drives / hard drives. Somewhere in early 2006, Rashmi, her husband Jon and her brother, Amit Ranjan, a mechanical engineer started weaving dreams about a site to share presentation online. They worked on it during the summer and SlideShare was born in a matter of six months on Oct 4th, 2006.

Theron, this San Francisco-based company has flourished and has attracted investors such as Mark Cuban, owner of NBA team Dallas Mavericks, Dave McClure, and Hal Varian, Google's chief economist. With two offices - in San Francisco and Delhi, the company worked round the clock with 8 employees in US and 20 in India.

Today SlideShare is a global phenomenon with tens of thousands of PowerPoint presentations being added everyday. Business revolves around PowerPoint at SlideShare. In no time, SlideShare was developed to a next-generation business media site. As against other business sites, SlideShare doesn’t have editors creating content; the users themselves are the content creators. SlideShare was a new step in the field of business content and business networking.

Rashmi is extremely proud of the growth of SlideShare. She recollects that it has never used advertisement for community building. The growth in leaps and bounds were viral and organic traffic. The users found it instantly useful within seconds of visiting the site.

As Head of LinkedIn SlideShare post-acquisition...

In May 2012, LinkedIn acquired SlideShare for $119 million. SlideShare had more than nine million presentations and nearly 29 million unique visitors then. Rashmi ran SlideShare as a unit of LinkedIn after acquisition also. She was the head of SlideShare product, technology, marketing, team and worked closely with LinkedIn to align the SlideShare unit with LinkedIn's strategy.

They say, building and organisation is similar to parenting. The ultimate goal is to make something that can be on its own; that will outlast you. After working closely for two years, she left LinkedIn in May 2014 after ensuring that SlideShare is thriving within LinkedIn and would continue to thrive without her.

Her style of management...

Rashmi checks her mail first thing after reaching office and replies to them instantly. She likes to start a conversation via mail and then take it up over the phone and not the other way round. She doesn't pick up random phone calls or check voicemails. Rashmi ditches her private office room and works mostly in a desk alongside her team. She has kept the open office space a cheerful space with yellow and orange for the walls as against the minimalist white and steel. She reserves mornings for product conceptualisation and afternoons for customers, advertisers etc. She catches up with people seeking start-up advice over a cup of coffee and finds time for upcoming women entrepreneurs. She always carries index cards with her where she notes down things to do.

Mondays start with a scrum meeting for ten to fifteen minutes. This gets repeated two or three times a week, where each person is given a few minutes to talk on three questions - what you did last week, what you'd like to do today, and what you need from somebody else to do the work. This way she gets an overview on what is happening in the office and who is working on what. She watches the daily usage metrics closely.

Weekend officially starts at SlideShare at 5 on Fridays with the whole team gulping down beer. This is how her team wind up the week. On weekdays she leaves office by seven and will be online till bedtime, should the Delhi team needs her.

Rashmi was born in Lucknow and grew up in Calcutta and Allahabad. Coming from a family of professionals, Rashmi did not have any real entrepreneurial influence in the family. Independence and being able to build things were two things close to her heart. She found the perfect marriage of these two in entrepreneurship and jumped in.

Rashmi is married to Jonathan Boutelle, whom she met at Brown University. He is also the co-founder and former CTO of SlideShare. This Indo-American entrepreneur resides at San Francisco, California with her husband and twin boys. She loves hiking, watching movies and reading fiction. She is a big fan of tea and has a teakettle in the office to drink masala tea at work. She speaks frequently at conferences like FOWA, SXSW & WebVisions. She blogs at rashmisinha.com on social software, entrepreneurship and HCI.

Memberships and other ventures...

Co-founder of the Information Architecture Society