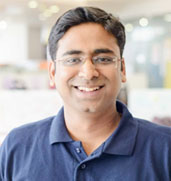 Sumit Jain is an Indian software engineer and Internet entrepreneur; He started online real-estate portal commonfloor.com for property seekers in 2007. CommonFloor.com is an Indian real estate portal founded in 2007 by three computer science gradutes namely Sumit Jain, Lalit Mangal, and Vikas Malpani. As the co-founder and CEO, Sumit is responsible for driving the strategic direction for Commonfloor.com as well as delivering on company goals. His result-oriented approach ensures a constant and relentless focus on end-user satisfaction. Sumit is fond of billiards game. The game not only relaxes him, it also helps him catch up with friends or at times, make new acquaintances. He is a vivid traveler and travelling gives him an opportunity to meet with different people from diverse cultures and walks of life. Travelling allows him to discover new facets of life.

Sumit was born and brought up in Khatauli, a small town in Uttar Pradesh, India in 1984. Sumit's father had a small shop where he sold building products, in which he spent most of his time when a child, and sometimes his father left the store under his care for days. It was at his father’s store that the seeds of running his own business were nurtured.

Sumit was in Khatauli till class VIII, as they had English medium school only till the eighth standard. After that he started going to a school in Muzaffarnagar which was 20 kms away from his town. He says that he never thought of IIT before that. But in the 12th standard he appeared for it, but could not clear it. He had scored 86% marks in the 12th. Then he got very good rank in local MNR and UP college and was very happy. Again, he got the best rank in my town. He graduated in computer science from IIT Roorkee and JSSATE.

This is how commonfloor started

After college, Sumit career started by joining with Oracle. Sumit and Lalit (the other Co-founder in Commonfloor) were colleagues in Oracle. Then both of them resigned from Oracle, and then they think of started something new. While Sumit learnt a lot in Oracle, but his heart was never into a corporate job. He went back home and from that day onwards started studying the market and technology -Ruby on Rails, PHP etc. Then Sumit and Lalit started a product called, ‘Ban Karo’, which was banning telemarketing calls. When they used to go talk to people one problem that everyone had was unwanted calls from telemarketers. They built this service, a social spam filtering basically. What is there for Gmail, they built it for the phone. However they got featured in the top 10 mobile companies. At that point of time, it was the world of VAS. Being a young startup and it was impossible to break through the mobile cartel. They decided that they will go back and build something for the Internet. And this belief was further strengthened with Vikas Malpani (other co-founder) joining the duo.

It all started when they (the three co-founders of CommonFloor.com – Sumit Jain, Lalit Mangal & Vikas Malpani) came to Bangalore in 2007. Initially, the three of them individually faced lot of challenges in finding the right accommodation. They had one of the biggest problems in the apartment complex that where they were living in a major sewage blockage. They were facing some issue but the issue wasn’t getting resolved since very few residents knew each other or had any sort of co-ordination amongst themselves. Privy to these problems, the three of them decided to create a way to bring people on a common floor or platform and hence the idea for CommonFloor.com was born. The initial thought was to develop a platform that could bring together people who live in gated communities and had come up with CommonFloor.com in November 2007. It was a challenge initially to get communities on board and trio had to come up with several iterations to get the product right. They also had to keep the product flexible enough to accommodate different priorities of different communities while still ensuring a good user experience for all. That is how they started believing that CommonFloor.com will work. This seed of an idea to bring tangible meaning to the lives of people shaped up to become Commonfloor as you know today.

While everyone in the online real estate sector looked at it from a classifieds perspective, they look at it from a community perspective. On common floor they engage with user’s right from the time they are looking for a house to when they move into their homes, and even when they want to sell it. They are the only real estate platform that offers to cater to all property information needs across the property cycle – search, research, property management, sale and rent. Currently, they have over five lakh active property listings from over 200 cities and one lakh residential projects listed with us.

Commonfloor follows cost per lead revenue model. Now they are following the Google model, by coincidence and not by design. The service is free for users and paid for businesses. They don’t charge the seller for listing a property. Sellers have to buy a subscription package. Every time they get a lead, the credits are deducted from their account. An average lead costs anywhere from Rs.50 and Rs.2,000. It has so far raised more than $60 million from Accel Partners, Tiger Global Management and Google Capital over multiple rounds. Common floor doesn’t charge individual sellers, only brokers and builders. It’s organic search. You can’t pay to showcase your property. It has to be chosen by the buyer. It cannot be pushed on to the buyer.

Sumit found a perfect soul mate along the way in his wife Aditi, who is an architect. Sumit says “We both are self-driven and respect each other’s individuality. Aditi comes from a business family and has a lot of respect for hard work and knows what it takes to run a business. She is my anchor in many ways.”