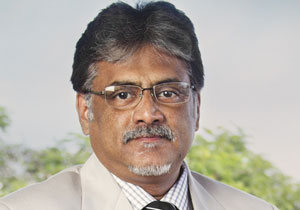 Big Basket team was earlier set up India's first e-commerce site FabMart.com in 1999, and then established the Fabmall-Trinethra chain of more than 200 grocery supermarket stores in southern India. They founded BigBasket in December 2011 as an India's largest online supermarket with a presence in over 25 cities in India. Let’s read the story of the company and the man behind it – Hari Menon! Hari Menon was the Cofounder, CEO and Head of Merchandising at Bigbasket.com.

Hari was born in 1963. Hari was born into a middle-class family that lived in Bandra, Mumbai, and was always taught to lead a live that gave him a settled live, a stable job, etc… It was the urge to experiment that pushed him to try out something new.

Hari is an alumnus of BITS Pilani and is married to ‘Shanti Menon’ – principal of ‘The Deen’s Academy’ (Bangalore). She is also the daughter of ‘E Shreedharan’, the man behind the Delhi Metro. Personally, he considers himself to be a Music enthusiast, and also wishes to play in a band someday. He is also an avid cricket fan and a member of the ‘Karnataka Cricket Association’ as well.

Hari Menon, co founder and CEO of Big Basket started his career with ORG Systems and worked with TVS Electronics, Wipro InfoTech and Integrated Data Systems. His wide exposure in these companies and subsequently in the education & training space in Manipal over the last few years has placed Hari in a unique position to guide India Skills in making an impactful contribution to the skills development sector in India. Before his entry into the education sector, Hari co-founded Fabmall - a pioneer in internet and grocery retail, wherein he handled a gamut of responsibilities including strategic business planning, raising venture capital, building organizational capabilities and creating a strong IT platform for the retail business. Prior to Fabmall, Hari headed Programme Management at Planetasia.com wherein he oversaw large scale project deliveries involving a wide team of software developers, business analysts, web designers& web writers. Then he co founded Bigbasket in December 2011 in Bangalore by a team of five - V S Sudhakar, Hari Menon, Vipul Parekh, V S Ramesh and Abhinay Choudhari.

What Is Big Basket?

Bigbasket is founded and operated by ‘Supermarket Grocery Supplies Pvt. Ltd.’ It has more than 14000 products and over 1000 brands listed on their catalogue – BigBasket is known as the India’s largest online food and grocery store. It offers a wide range of options in every category to provide you with the best quality products at the lowest prices which include – fresh Rice and Dal, Fruits and Vegetables, Spices and Seasonings, Packaged products, Beverages, Personal care products, Meats, and many more items.

While, BigBasket is an online based company and does not have any brick and mortar stores. It is very simple to order as you need to visit bigbasket.com and choose the products you wish to purchase then add the items to your Shopping Basket and the Big Basket team offer 4 slots per day. Finally chose a convenient payment option (Cash, Sodexo, Credit Card) then products would be delivered to your house.

It all began in 1999. Hari Menon along with five of his friends – VS Sudhakar, Vipul Parekh , Abhinay Choudhari and V S Ramesh launched their online retail website called ‘Fabmart’.

Even though they did manage to get some traction but since their idea was way ahead of its time, they could not shake the masses. And to worsen the whole deal, the dotcom bubble burst happened.

That is when they decided to put the online business on the backseat and focused all the energies on ‘Fabmall’, their physical retail chain of grocery stores. They also merged this chain with another grocery retail chain called – ‘Trinethra’.

Anyway, in a matter of seven years, they expanded their business to 200 stores across Andhra Pradesh, Tamil Nadu, Karnataka and Kerala. Around the same time, they also decided to sell-off the business to Aditya Birla Group.

That is when they thought of getting back to their original idea online grocery store. As their discussion deepened with serial entrepreneur Krishnan Ganesh, they concluded to go ahead with it. The idea was collectively seeded by serial entrepreneurs and angel investors Krishnan and Meena Ganesh. And finally in December 2011, they launched BigBasket.com!

Soon after the launch, they also received their first funding of $10 Mn from ChrysCapital co-founder Raj Kondur and Ascent Capital. He had earlier invested $4 Mn in Fabmart as well.

According to Hari, the first six to nine months were the most challenging ones. Since they had already faced the heat once with Fabmart, the pressure was even more. The biggest challenge for them was to create and maintain a building capacity to meet customer demand.

This was even more commendable, since they were barely advertising about the brand and mainly relied on word of mouth. As per their stats, more than 45 % of their customers came through references.

By the next one year, they had already expanded to Hyderabad and Mumbai, and were also planning to further increase their services in Delhi, Chennai Pune, Ahmedabad and Kolkata as well.

BigBasket also roped in Bollywood actor – ‘Shah Rukh Khan’ as their brand ambassador, for an undisclosed sum; following which, they also launched a high volume television, digital and print media campaign as well.

BigBasket team along with Hari menon has effectively managed to attain and maintain their success by using various strategies which mainly surround three important factors:

Now the grocery business in India is mainly divided into two types i.e. Planned Purchase and Top-up Purchase. When BigBasket started their operations, it adopted the ‘just-in-time model’ – wherein not only perishable good but every item was brought against an order. In other words, they were purchased-to-order. In this model, the delivery boy directly picks up the item from the vendor, and directly delivers it to the customer. They still use this model for quite-a-few items like Bakery items, Pet food, Small household appliances, etc. which are not feasible to store.

Over the period of time, as their business grew, they moved on to an ‘inventory model’ (for most of its products), and BigBasket now buys products directly from suppliers like – HUL, P&G, farmers, mills, etc and then stocks these in warehouses. BigBasket then adds a margin to the purchased price of the product before selling them.

They have a completely automated process of initial inventory stocking and post its completion, re-ordering! The company uses analytics to predict their weekly demand, with the help of which they optimize their logistics and supply volumes to drive better margins.

This ‘Single-point stocking’ greatly helps the company to strictly manage the shrinkage and rejection of products, and also helps them to invest the saved money in advertising as well.

More recently, BigBasket has been seen adopting a hyper local strategy, wherein, it has partnered with more than 1,800 neighborhood grocery stores across India to deliver goods in under an hour.