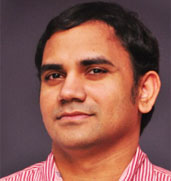 Should an entrepreneur be necessarily making only money? Not in the least – as proved by Dr. Srinubabu Gedela, the founder, CEO, and managing director of OMICs which is one of the world’s biggest publishers of open access journals – has under its fold about 700 journals through which it publishes about 50,000 articles every year – all for free access by the young and aspiring scientific community as well as anyone else who is interested in getting to know about facets of our existence.

Dr. Gedela’s story isn’t your rags-to-riches type. In fact, his is neither rags nor riches although he did hail from a humble background and made a success of his career through the strength of conviction that information about science must be made accessible for all to learn and create more. There was never an element of commercial interest in any of his endeavours, and OMICS hasn’t even remotely exhibited qualities of a business entity. All thanks to the visionary Dr. Gedela.

While it traces the necessity is the mother of invention and oft-treaded path of many successful businesses, the journey it has traversed is one of a different kind. Making no attempts at all to bring in revenue or monetize: only yearning to propel open access as the mantra for many scientific endeavours.

The humble beginnings in a remote district of Andhra Pradesh

Born to Mr. Appala Naidu and Mrs. Yashodha hailing from the village of Allena in Srikakulam District of Andhra Pradesh, Dr. Gedela completed his primary education – like most village-folk do – from the only school in his village. Then, being the bright student he was, time was ripe for him to pursue higher education. Accordingly, he stepped out of the cozy and serene environs of his village to enroll into the Andhra University for a B. Pharmacy. He wasn’t satisfied still with that degree so he followed it up with a Master’s in Technology degree in Biotechnology from the same university. His success at every stage of his educational life encouraged the young and aspiring to be a scientist to also explore his postdoctoral studies, which he managed to acquire from the Stanford University in the US.

The prelude to the spark

Like it happens with most students belonging to modest families in India, Dr. Gedela also faced many challenges through the course of his higher education. Of the many that he had to confront, the biggest one was the access or the lack of it to educational journals. He didn’t have a lot of money with which to pay for accessing scientific material to support his post-doctoral thesis (research paper).

The struggle was so immense that it left a bitter taste in his mouth forever. While he would weather the storm commendably by doing everything in his power, riding the extreme wealth of will-power he had, Dr. Gedela went on to complete his education. Along the way he would present his research work on the subject “Proteomics” at an international conference held in Seoul, South Korea, at the Human Proteome Organization.

His paper was well received and much appreciated. Importantly, his work got the ultimate approval from the scientific community at the conference when he was awarded with the “Young Scientist Award.”

While his work being recognized was an elevating experience for the young Indian, it was also humbling in a way because only he knew the pains and travails he had had to go through to work on the paper and get the desired output. He was also mindful of the fact that not many would come trumps like he did – in fact not may would even go as far as attempting such research work owing to the extreme lack of access to scientific material – largely owing to the monetary aspect of it. He felt perhaps it would have relatively easier and even better if he had had open access to all the stuff he wanted to sift through to be able to make his point as well as substantiate it.

That is when it resolved that not long after he would start an initiative – a publication to be specific – that would publish scientific material and make it accessible for free. Thus began the quest for making OMICS a reality.

Dr. Gedela founded OMICS in 2007 with the sole objective of helping fellow scientists overcome their difficulties in accessing information and knowledge through and hence started it as an open access publication.

As for the name of the organization, word goes that OMICS was derived from the early interests of Dr. Gedela in the field of proteomics and diabetes.

The mission of OMICS under ‘Open Access’ was guarantee free and immediate access to information for any academic or research requirement of anybody, anywhere, across the globe. And Dr. Gedela has committed himself in ensuring that there are no digressions from this mission. It is sacrosanct.

If access to material was an impediment to hundreds of ignited minds, Dr. Gedela was left wondering as to how many were struggling to get insights from academicians, experts, seniors, etc. by not having platforms for in-person interaction as well as exchange of ideas which is the very basis of much scientific activity.

So, identifying this crucial need for multi-people, multi-level, and multi-type personal academic interactions, he then set about expanding the scope of activity of OMICS from being just a publishing house to also becoming an organizer of events, science fairs, symposia, exhibitions, conferences, summits, seminars, and workshops across the globe it would invite eminent personalities from both the scientific community as well as some business leaders well to communicate the powers of science through meaningful interaction and discussions where leading scientists from around the world deliberate their knowledge with young and aspiring scientists.

This area received so much interest from like-minded people that today OMICS under the guidance and leadership of Dr. Srinubabu Gedela organizes about 1000 such conferences, conventions, and fairs, every year across the globe (across USA, Europe and Asia with the support from more than 1000 scientific societies) – no mean achievement.

Today OMICS and its associate companies are present in 5 countries with about 2000 employees working to not only sustain the organization’s mission but also to carry the founder’s vision through the 700 online open access journals encompassing fields such as Life Sciences,Clinical, Medical, Engineering &technology and Management under which somewhere about 50,000 scientific research articles are published annually.

The full entrepreneur and philanthropy

After making deadly sure that no aspiring science student finds himself in the predicament that Dr. Gedela had to face during his academic years by founding the world’s leading publishing house for free online science and knowledge journals through OMICS and its affiliates across five countries, Dr. Gedela has turned his attention also towards making his vision truly sustainable.

The modus operandi being acting as a venture capitalist. As part of which, it is said, he will fund and support projects that have the capacity to generate self-employment among youth. He also turned as a film producer with his production house called OMICS Creations under which many family-oriented social entertainers such as ‘Chandee’ ‘Aata Arambham’ & ‘Veerudokkade’ are noteworthy – movies which mostly dwell on social, family, and women empowerment issues.

We now know why he is not akin to any regular entrepreneur as vindicated by his VC activity – not to make money for himself or the fund but for the benefit of other commoners like him who would not only benefit through self-employment but also through his publications which paved the way for a different kind of employment such as executives, coordinators, presenters, translators, editors, and freelancers for the scores of publications under the umbrella of OMICS.

The entrepreneurship of Dr. Gedela completes the full circle with his social development activities as he also promotes schools, healthcare,safe drinking water, and sanitation in villages of the country – an activity he has been involved in for the last seven years. In fact, he adopted 7 villages including his home Allenna with Burja, Kilentra, G B Puram and its nearby villages being the other in the much impoverished Srikakulam District of Andhra Pradesh.

As part of the strengthening the education infrastructure of these under-attended villages, Dr. Gedela initiated the “OMICS Educational Society” which sets the curriculum, trains the human resources, provides technical assistance and works on capacity building through faculty development workshops to the teacher and taught in schools that are already functioning at various levels. The pedagogy in these schools is well-complemented by audio-visual teaching learning equipment.