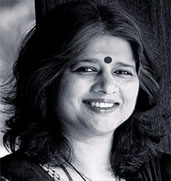 This power-woman of the Indian industry is very much a chip of the old-block. That is to say that her zeal, drive, and determination match that of her father’s (Dr. B.V. Rao who is known as the ‘Father of the Indian Poultry Industry) - to not only retain the status of Venkateshwara Hatcheries Group (also called as Venky’s) as the premier companies in the country organized poultry sector but also to make life easier for the thousands of farmers who have aligned their lives with those of poultry industry’s players. That is why she is often referred to as the “Voice of the Indian Poultry Industry).

Of course along the way she has added her own flavors to the style of leadership and functioning while retaining to a great extent her father’s stamp.

That she was introduced to the world of poultry when she was barely a teen during which period, it is said, she spent most of her time on the family’s farms rather than playing with children of her age or indulge in activities other children did. Instead she was engrossed with birds – doing things like feeding them and getting herself acquainted with the nitty-gritty of poultry hygiene.

Looking at the promise that his young daughter exhibited, it was perhaps a master-stroke by Dr. Rao in entrusting the mantle of taking forward the business and to his daughter. For she excelled in not only living upto her father’s expectations, she even did what many may not have thought possible – presided over the functioning of well over a dozen company’s within the group as well as without it and made a success of a multi-activity businesses.

Education and entry into the family business

Desai has law graduate and that serves her cause well what with the country as indeed its poultry industry moved to the world stage, entailing a plethora of legalities for exporters triggered by the World Trade Organisation (WTO) regime. She did her Bachelor’s Degree in Law from the University of Pune.

She was brought into the family business in 1988 by her father who had immense faith and conviction in her capabilities and was also inducted into the board subsequently.

Loss and Legacy of a legend

What Dr. B.V. Rao did to the Indian poultry industry is unparalleled in the history of the country’s business echelons. He was the architect of unifying the country poultry sector and more than that brought a set of standards and practices that provided a level-playing field for all the poultry players of the country. He had imbibed the same qualities in all of his children, especially his daughter, Anuradha.

It wasn’t surprising then that the great visionary and of one the most successful entrepreneurs of the county (he had moved to the city of Pune from his native Andhra Pradesh to set up a small chick hatching business with a couple of friends, which eventually grew into the large conglomerate that we now know as Venky’s) considered Anuradha as the natural choice if it ever came to leadership of the group.

That day did come in her life in 1996 when Dr. Rao passed away and the mantle of overseeing the already leading poultry business in the country into the 21st century and beyond.

Anuradha Desai became the Chairman and Managing Director of the Venkateshwara Hatcheries Group in 1996 and right after assuming the responsibility, some of her initial tasks were to make sure the group recoups from the loss of the patriarch and founder – which she did with help from her brother Venkatesh Rao and Balaji Rao.

Then she set about putting into place plans for growth of the company as well as expansion into various other affiliated and external business fields. Today the company is diversified into around 30 fields poultry, processed food, animal vaccines, pharma and healthcare products.including eggs, egg powder, poultry feed, animal feed, vaccines, biotech, R&D, even wine distribution and entertainment, and now even sports (with the acquisition of Blackburn Rovers Football Club, a reputed English football club in the top football division of the country). In fact, she even orchestrated the launch of ‘Venky's Express’, a ready to eat chicken outlet from the group whose first outlet was opened in Pune (Akon performed at the opening event).

One of the many things she did was to improve the company’s chicken (Venky’s Chicken) export business besides of course fighting for the rights of domestic farmers who were up against global competition when the country open up for global players to ply their trade across various industry segments.

A campaigner and pillar of strength for the domestic chicken market, she uses everything in her power to help local farmers in their fight against so many problems such as disease outbreaks, foreign companies entering into the market and making a dent into their revenues, etc. just like her illustrious father did. So, one should not be puzzled if one came to know the fact that the group’s listed company (Venky’s) supplies chicken to groups like KFC, Pizza Hut, Domino's, etc. (of course, this besides the fact that Venky’s supplies 80% chicks to farmers and hatcheries in the country)!

While she and her husband Jitendra Desai (an accomplished Chartered Accountant) and her brothers Venkatesh and Balaji are always yearning to maintain the stability and the momentum of the company, Desai herself is recognized by many for her visions and thought leadership and hence has been asked to lead many other companies in whatever capacity she can. And why not – figure this – under her leadership, VH has grown to become the largest fully-integrated poultry group in Asia, with its operations are spread across 20 countries.

Around the year 2010 (almost a decade-and-half after she took over the reins of the group from her father), with a view to carry forward the expansion drive to overseas markets where although they have a decent enough presence, the company and Desai were looking at widening its consumer interface.

One of the ways was to expanding Venky’s XPRS fast food franchise (a kind of down-market KFC) but that didn’t give it the ideal mileage expected of a global player. Thus, Desai and her team, strategized a new plan to grow the business in three identified continents (Europe, Asia and Africa). It was to identify major sports properties and assets to attain brand visibility.

Thus after much deliberation and R&D, the group bought Blackburn Rovers Football Club, a reputed English football club from the English Premier League.It was a really strategic move by Desai and Co.:simply because Indians are the largest minority group in the Lancashire town of Blackburn, and if you are looking to connect with a community, then what better way than buying out the local football team?

While it didn’t prove to be the success Desai had hoped it to be (from a sporting sense), what she did achieve by this acquisition was to accomplish what bigger Indian Conglomerate such as the likes of Reliance and Sahar could not do.

Expectedly, not everything she has done has been met with approval or success. And some of it courted controversy as well. For example, while the first season after acquiring (Blackburn Rovers) was OK- they avoided relegation, what the clubs supporters and fans didn’t like was the way managers were being hired and fired by the owners which lead the club being relegated to 2nd division (championship). This hasn’t gone down well with just about anyone that has got anything to do with the club (except the owners). Then there was the Avian flu issue – Desai had in the past (1990s) successfully campaigned and protected the interest of Indian farmers by opposing the import of chicken from other countries citing hygiene and risk associated with it (she said the outsiders were delivering unsold or rejected stock to the country). While that was good and strengthened her position with farmers as well as the establishment, there were accusations flying high about VH supplying infected birds to farmers in Navapur village of Mahrashtra's Nandurbar district.

Of course, as always, she braved the tough times and brought VH out of the slime by coming clean on the issue. ("If we had supplied infected birds we would shy away any such idea. Besides, isn't it against our own interest to supply such stock to farmers?" – was what she had said). That’s the sign of a true leader.

“Investing in relationships take time and people need freedom to work towards a goal.”