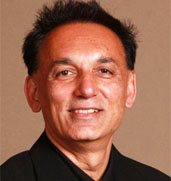 Born in Kenya to a migrant Indian family, Desai spent most of his childhood in Mombasa before moving on to Ahmedabad (in the western state of Gujarat, India) to pursue schooling. He did his Bachelor of Technology course in Electrical Engineering from the prestigious Indian Institute of Technology (IIT, Mumbai). Like most first generation entrepreneurs we have seen, Desai too felt the need to equip himself with management education and exposure the business world from a global perspective. To be able to do that, he completed an MBA (Finance) course from the Stephen M Ross School of Business, University of Michigan.

Desai joined TCS (Tata Consultancy Services) India’s foremost and number one IT firm for a monthly salary of Rs. 769 (about $12-13 in present day). Although he worked three for only a brief period, he picked up the nuances of running a business and especially a model that he would later employ to great effect after founding Syntel.

After the short stint at TCS, Desi came to America on an assignment for TCS and met his future wife, Neerja Sethi there (has a master’s in computer science from the OaklandUniversity). They hit it off well while working for the Indian technology premier and soon it turned into wedlock.

One would expect a newly-wed couple to fully utilize whatever time available towards marital bliss. But not the Desai-Sethi couple. What they did instead, being the technocrats they were and being nurtured at TCS, they founded an IT company by the name Syntel, Inc. with an initial investment of a mere $2000 Since it wouldn’t suffice to pay for the bills of even one employee much less pay for office rent and expenses, the couple started operating out of their home in Troy (Michigan).

The first year operations brought them a sale of just $30,000 – which was almost next-to-nothing if one considered the operating expenses they’d have to meet. In fact, many prospects as well as people they met along their path towards entrepreneurship did everything to discourage them from opting this apparently disastrous path. Some shooed them away asking them never to come back again even in the premises of the companies, while others dissuaded by just saying stop kidding and stick what you are – an ordinary programmer – as they thought it might difficult to do something that Desai envisaged in America, amongst Americans companies some of which were already established with a long list of clients.

But being made of sterner stuff and having seen the success of the business model at TCS in-person, Desai as well Sethi were convinced and, hence, all the more determined to make it a success. The initial resistance and not-so-cool welcome to their business was a dampener for sure. It hurt them. Pushed them to the wall. And put them down along with their aspirations.

All this was transient. As, regardless of what, the gritty couple continued pushing forth their business. Their persistence, perseverance, and hard-work coupled with a bit of luck, they turned so many leaves over, proved the naysayers wrong.

Their relentless quest for delivering quality while staying small and nimble which sort of went well with clients wanting flexibility as well as performance. Venture funding was not as aggressive back then as it is nowadays and companies had to really slog it out and deliver before they had a buy in investors. Unlike now where you show a glimpse of what is possible as well as the promise of multi-fold returns draws many Venture Capitalists flocking to your doors (of course, one must have the clear differentiator of an idea).How difficult it was start-ups back-then (only they were not called as start-ups, though) is evident from the fact that even after 10 years into operations, Desai’s Syntel wasn’t able to get a line of credit from banks.

And so it was that Desai and Syntel had to do everything in their capacity to not only bring in clients but also to succeed and sustain. Any other mortal would have probably crumbled at this prospect – no ground support (especially when pitted against local companies that already had a head-start), no capital to support even the basic day-to-day operations much less brining in top talent and thinking of expansion and diversification, and on top of everything, there weren’t many who knew you even existed – such was the scenarioback in the early days of the information technology revolution.

Desai’s leadership and vision coupled with a few smart moves and his unflinching belief in the promise of information technology (in his own words, "I did know that the industry (information technology and outsourcing) was going to grow significantly and with the right moves, we could outpace the overall industry growth and we have been fortunate.")and the continuous supportive role played by his family throughout, ensured that he and Syntel succeeded to become a public listed company by 1997.

The mantra that Desai applied was find an underserved market segment and become really good at it, if you are not already one, commit towards serving it well and work very hard. In the process, making sure that customers really think highly of your vis-à-vis your niche service / offerings, was a must. They identified the niche to be health-care and life-sciences to be those areas and relentlessly focused on them. Of course, there were other verticals also in which Syntel worked such as That besides Desai also made sure that Syntel had one more USP - build collaborative partnerships and deliver innovative solutions that spanned beyond business benefits.

Along the way, the company had to endure, like most in the industry, the 2008 economic crisis. Desai and co.weathered the storm and how.It is a fact that owing to the down-turn almost all businesses (including obviously Syntel’s clients) were on a cost-cutting and austerity drive. While this would have meant peril for most companies, what allowed Syntel to not only stay afloat but also do reasonably well was its pro-activeness in helping clients to manage costs through a combination of efforts such as employing incremental outsourcing andleveraging additional offshore capabilities that lead to increased productivity and rate reductions. And what it meant for Syntel? While many of the initiatives reduced client costs, they also provided enhanced margins to Syntel.

That’s is but just one of the many evidences of Desai shrewd business sense as well as visionary self. One of his other visionary endeavours was to set-up offshore units in India to make use of considerably lower wagers prevailing in the country. In that sense, Syntel proved to be one of the pioneers of the Indian IT and ITES outsourcing industry along with the erstwhile Patni Computers.

The company at the time of the melt-down had a market-cap of $2.7 billion – no mean feat for an upstart that began with nothing and operating with a shoe-string budget for a good decade after its inception. Under Desai’s leadership, today the company has about 23,000 employees, revenues of about a billion USD, and net income of around $60 million providing integrated technology and business services and has won more than a dozen awards.