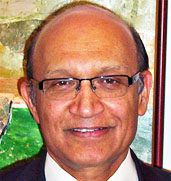 This man’s career could well go down as one of the most complete professional sagas of our times, if not all time. Simply put, Arun Kumar, the Chairman and CEO of KPMG in India, has traversed an entrepreneurial and professional journey like very few in the history of the modern world have. He started off at what could probably be termed as the best grooming ground for Indian executives – the Tata Administrative Services (TAS) right after graduation from the Kerala University. The half-decade spent at the country’s leading conglomerate not only taught him the nitty-gritty of the Indian industry but also introduced him to a world beyond the seas which was as yet unexplored by most of the country’s aspiring young talents.

So he left for the United States in 1978 to pursue a course in business management from the world renowned Massachusetts Institute of Technology (MIT) - Sloan School of Management in 1980 – where he realized his potential to be an entrepreneur. From then on it was a spate of founding companies and succeeding in the early days of the computer revolution which were followed by a very long first stint at one of the world’s leading professional services company – KPMG. Through the course of his almost two decades he assumed responsibility of many positions and delivered in each of them before finally a role with the Obama administration (yes!!) beckoned and he, like everywhere else before, delivered and delivered how?

Arun Kumar did his schooling from the Lawrence School, Lovedale (Kerala) through the early-to-mid 1960s. Then he did he completed his Bachelor of Science Degree (Physics) from University College, University of Kerala, Trivandrum in 1972. That he had leadership qualities was evident from the activities he was involved in since his college days where he co-founded the Science Society of Trivandrum.

Right after graduation he joined the Tata Administrative Services (TAS) where he got selected into the central management cadre of the Tata group – then, as well as now, one of the leading business houses of the country.

This allowed him to gain much perspective in the company’s subsidiary business such as auto, steel, exports, and beverages. In fact, he also got introduced to the future chairman of the group Ratan Tata under whom Arun worked at Nelco – the electronics subsidiary of the group.

This was quite an engagement for the young Arun Kumar as it allowed him assist Ratan Tata while working on various assignments encompassing duties such as new product introductions, management development activities and government relations.

To the United States…

The learning curve had come to its saturation point at TAS. Arun Kumar was looking for new frontiers. So it was decided that he would have to pursue his ambitions through the pedestal of much industrial and entrepreneurial revolution of the world in the 19th& 20th centuries – the United States.

The best way to succeed in the land of dream as most considered was to equip oneself with the right education and knowledge before setting foot on the path to the ever-enterprising journey of entrepreneurship. Thus, he packed his bags and off he went to the US in 1978 to pursue a management degree from the Sloan School Of Management at MIT. Even at the MIT he continued with activities that he had undertaken as a student at the University of Kerala. He was President of Sangam – the India Association of MIT

He joined Elxsi – the venture-funded mini-computer company in 1980 after finishing his MBA.As controller of the company he led the finance and administration departments and established the MRP process as well as the ERP infrastructure of the company besides working with many investment bankers on major placements.

After working for more than 3 years at Elxsi, he then shifted gears to co-found a company called Cydrome Inc. in 1984. The Milpitas-based company was a pioneer in the mini-supercomputer segment and Arun besides being the Co-Founder and member of the board of its directors, also assumed additional responsibilities as its CFO and VP operations. This was a very crucial phase in the career of Arun Kumar as he went about making it the success the co-founders had envisioned it to be, by establishing and managing financial processes, manufacturing operations, and the all-important, MIS.

With such kind of effort put in through the close to five years it had been under the leadership of Arun Kumar and the other co-founders, it was bound to attract the attention of technology leaders and, accordingly, it was acquired by Hewlett-Packard which rechristened it as PA-RISC Architecture.

Arun Kumar next milestone was to the brief (14 months) stint as director of planning and management information of the workstations and servers company based of Mountain View called Silicon Graphics.

The next 6 years or so were the perfect prelude to his long KPMG association. He took up a couple of external responsibilities such as the Vice President and CFO of Elite Microelectronics Inc. which dealt in fabless semiconductors (for which he established sourcing and distribution arrangements from Japan and Taiwan)as well as that of Netlabs Inc. the network management software company, Netlabs Inc., (involved in financing, strategic alliances, and ops) and followed these two brief stints by setting up yet another company called Planning and Logic Inc. in 1993. This new company was a pioneer in creating planning and logistics software applications and was merged with another company of similar profile in a couple years since its inception.

After successfully working and delivering for other companies in various capacities as well as himself successfully launching and selling off two companies, time was ripe for yet another change for Arun Kumar.

He joined KPMG in the July of 1995 and ever since right upto his alignment with the government of USA under the then President, Barack Obama, he has never looked back. His success is defined more in how he has helped shape so much good around through the various capacities he took up with the global consulting leader rather than his own growth.

A summary of the various roles and responsibilities he took up at KPMG encompass:

As can be seen, Kumar thought leadership and capabilities were well recognized by the company which put him on numerous crucial global assignments of the company – in all of which he came out with flying colors.

Arun Kumar had spent 18 long years of his life at KPMG assuming very high profile responsibilities and doing well. Thus when President Obama and Co., were looking for an experienced hand to help them with their global export and inward investment promotion efforts, they didn’t have to look further than Arun Kumar. The choice was very simple – the man had such credentials as very few others had besides of course his international experience of working with scores of clients and heling them realize true value for their businesses, made it a no-brainer for the people that be, including President Obama, to zero-in on Arun Kumar for the role of Assistant Secretary of Commerce and Director General of the US Commercial Service.

In this inherently constricting kind of a role (intrinsic to any state organization) also, Arun Kumar was exemplary as he lead the official advocating for better market access for U.S. exporters. That besides, he also worked as the Chief executive of the U.S. Commercial Service with offices in 78 countries and over 100 U.S. cities across all 50 states of the US and served with distinction along with a workforce of over 1600 professionals.

In fact, it is to Arun Kumar’s credit that commercial ties between India and the United States have strengthened as he played a key role in establishing the India-US Strategic & Commercial Dialogue besides helping renew the India-US CEO Forum. President Obama and his team could not have done any better with their selection of the candidate for this very crucial engagement.

In February 2017, the Board of KPMG India (Arun was a lead partner of the India practice) and its partners ratified the selection of Arun Kumar as its Chairman & CEO for a term of five years. The fact that he beat 2-3 serious contenders from within the company speaks volumes of the trust the board has in his capabilities to carry forward the firms operations to well beyond the success it has already had in the emerging landscape of globalization and technology-enabled business transformation.