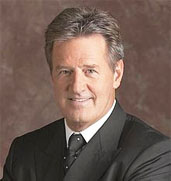 From being a lonely teenager forced to subsist on just a loaf of bread and peanut butter though a whole week and chances looking forever bleak of a revival in fortunes, Rick Goings, the super successful and highly philanthropic CEO of Tupperware Brands Corporation, had everything to gain and nothing to lose when a serendipitous interaction helped change his life-forever. It changed his outlook toward life, opened his eyes to a small yet fruitful window of opportunity that he never imagined existed. Such is the beauty of life and its vagaries that when you have your backs against the wall and everything is seemingly lost, there could still be that slice of luck knocking your door that you need to grab hold of and work hard to make good of it.

Teenage could be passing off simply as a waft for some but not for Rick Goings. He was forced by family circumstances to live out of home – all on his own. It was during this period of relative struggle that Goings found the spark that would lead him the direction of a successful life. Although it didn’t exactly set everything flying but it definitely allowed him to find his bearings and move in every step of life with the required zeal and confidence.

The spark came from an unlikely source. Out of home at 17 meant Goings had to slog it out to make ends meet. Accordingly, he quit school and started out with door-to-door selling – he carried Grolier Society Encyclopedias around the Wheaton and other Chicago suburbs. During one such visit he met a couple and showed them fare he had brought along. However, like all of his attempts to converting a meeting into a sale, this one too failed to register a sale. But, one thing that was vastly different was that although the couple didn’t buy, they were kind of nice to him. The interaction, brief though it was, helped Goings to know a little more about the husband. The husband worked in the navy and seemed to be doing well (owned a house, etc.).

The nature of the husband’s job made sense to Goings who had up till then never given it a thought. But now equipped with evidence of what it can do, he quit selling encyclopedias and went to Navy Pier at Lake Michigan and got himself enlisted. Goings was in training three months later. Joining the navy would prove to be the game-changer for him as it, primarily allowed him to stay afloat under trying circumstances and then also showed him the way to keep working at it and succeed even. He acquired leadership skills as well (learned to be a leader for the first time in his life after he became the platoon leader of his crew after a successful test) which have not only helped him prosper but also have made him held out so many others though his long and rewarding journey as a business leader.

College, early entrepreneurship, and into the top roles…

After his much rewarding stint with the navy through the course of which he also had the experience of working overseas, he joined college but it didn’t sustain his interest enough to make him stay the course. So, he quit college mid-way and along with a bunch of friends founded a distributorship that did direct sales of home fire alarm systems - the product "Pyro Sentinel Heat Detection System" direct sales was the first of its kind in the US.

Since fire safety alarms weren’t common back then, it took off well and became a success. But, he had to split the partnership with his friends and start a new company called Dynamics, Inc. in Charlottesville (VA) that dealt with smoke detectors. This was a success too and it continued to give him all that he had hoped for in life.

From owning a business and making it so successful that he could sell it off (yes he did, as by now there had grown enough competition and he couldn’t let the opportunity to make good slip by) and move to pursue other things.

And so he did. His sales experience, his global exposure, and success as a businessman all conjured up to give him a senior position at Avon – the then leader in the US market. In the seven years at Avon he held several top positions including president of Avon Germany, group vice president & senior operating officer for the Pacific Rim, and president of Avon USA.

Although Tupperware was established in 1946 it was nowhere near the global lifestyle solutions and beauty products company it has become today. And almost all of it could be attributed to the single-minded focus of Rick Goings, whose leadership has enabled the company to thrive with a multi-billion dollar portfolio and global scale of the corporation - much of that growth coming from emerging markets something that Goings focused on right after he took over when he stressed on branching out to Latin America and Asia. Now almost 95% of its revenues come from outside the US – all pivoted around Goings’ contemporizing the company’s entire business model, including product lines, party selling system, and compensation and recruiting approaches.

By the time Goings joined Tupperware in 1992 he was well and truly into the social aspect of entrepreneurship. The philanthropist in him had been knocking the doors ever since he succeeded with his business. But, now was the time to help that takes shape.

That he was damn serious about it is evident from the fact that he put a precondition for taking over the reins of Tupperware as its CEO only if the company focused on two very specific things as part of its charitable involvement: women’s issues and Boys & Girls Clubs.

Of course, there would be no charitable cause run if the business was not profitable enough as he puts it “philanthropy and profitability are complimentary.” Therefore one of the foremost things he did was to realign the company’s operations presence from a primarily US-centric to that of a global one. One of the reasons for him to lay emphasis on the overseas market was the increasing difficulty of direct sales models in the US. Thus the “Tupperware home party social networking” that was a proven success in the US in early decades of the company’s inception, repeated it with such popularity that within just four years since the measures were taken by Goings, the company’s overseas revenues grew to a whopping $1 billion, a fact that led to the company being spun-off from the parent company (the new entity retaining Goings as the CEO).

Today, Tupperware has a 3.1 million strong global sales force that has clocked revenues of $2.2 billion in 2016 and, along the way, enabling the company to feature on the Fortune’s “World’s Most Admired Companies” list.