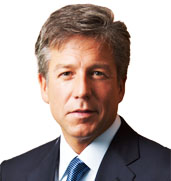 The life of Bill McDermott, the American CEO of the German company, SAP SE (the world’s leading ERP company for which he currently lives in Germany because he says "It’s significant symbolically for me to have a residence in Germany."), has traversed through so many interesting twists and turns that it is worthy of being documented through an inspiring book. If we commoners can gauge that, can’t he himself do? Of course he did and released a book called “Winners Dream: A Journey from Corner Store to Corner Office”with which he hopesthat his story will not just inspire other hard-working youths, but show them how to do the same.The man’s entrepreneurial spirit shines through even in publishing this book which he himself call a part memoir and part business strategy.

Thus, it perhaps would be futile for the likes of us to try and chronicle the various stages of his life that was and still is packed with love, hardship, setbacks, and success.

But, we can surely put forth (briefly)some aspects that can be considered as highlights of his life.

McDermott has a bachelor’s degree from Dowling College and a Master’s Degree in Business Administration from the Kellogg School of Management at Northwestern University.

Entrepreneur all the way…

Being born into a working class family (whose patriarch’s was the great baseball player Bobby McDermott) meant that Bill had to take life by the scruff of its neck in that he never let an opportunity pass by without putting his best to get the most out of it. You had to do all that and much more if you happen to dwell in a house that was so rickety that the floor seemed to flood every time it rained, and many more such adversities. It was the harsh reality of life that dawned upon young Bill that one had to slog it out, persevere, and top it with a bit wisdom as indeed courage to be able to make good of it. So it was that he went on to do a handful of odd jobs during his schooling and the money he thus earned was put to good use- meet his college expenses (at least until Dowling College). In all of this, what is most noticeable is his enterprising spirit even at the age of 11 years when he started of his paper route business and scaled it into a successful multi-product enterprise that included newspapers, greeting cards, cookies, etc.) – do you see some cross-sell / up-sell there?

Anyway this was not only enough to subsist but also to meet the tuition expenses. But of his early ventures, it was the delicatessen business that he ended up owning when he was barely 16 that stands out as the testimony to visionary entrepreneur the world would see in later years. It wasn’t planned – there was no room for choice of a type of job that one could choose under those circumstances during his childhood – you had to make do with whatever was presented to you. He happened to secure a job in a neighbourhood deli (Country Deli), and not long after that he was offered by the owners to take-over the company in lieu of $7000 (in promissory notes). It was this deli that is said to have paid for most of the expenses throughout his academic life.

Into the big league…

Right after graduating out it wasn’t a piece of cake for him to secure a job. Circumstances were such that he had to even wait in a block-and-a-half long queue of job-seekers to get a job that paid him $2.35 an hour. After such short stints at 3 or 4 small companies, he got the big break of his life when he got a sales job at Xerox after convincing the manager the same day that he was interviewed.

This association was to last for a long duration of 17 years during the course of which he had both success and adversities that he had to face such as get promoted to be only dealt a pay-cut (such were the times), then when entrusted with the responsibility of over-turning the worst-performing district of the company (in Puerto Rico) moving there along with his family to a location that was beset with sand fleas. But he weathered it all and turned it into best performing district and eventually (by the end of his 17 years at Xerox), he was the youngest corporate officer and division president in Xerox’s history.

His experience in a largely sales role at Xerox and his subsequent stints at Gartner and Siebel Systems made him understand and respect that number one truth in a pro’s life: Work hard. That as well as treating all the people in one’s life with love and respect, keeping a positive attitude no matter what life throws at you, etc. were the learnings he got from working at these global companies.

He joined SAP in 2002 after the company approached him to helm its North American business which back then was struggling. But he knew too well what he was getting into as just prior to that he was working for Siebel – a direct competitor of SAP. Apart from perhaps the realization that most of the German staff who were entrusted to look after the North American business for the company had failed and, therefore, somebody local – an American- might just be able to turn it around for them in America, it was the fact that Bill had worked in Siebel that may have prompted SAP to approach him.

So he was made the CEO of SAP, North America. As soon as he assumed the responsibility, Bill got down to some serious business – change in approach, change in gears. He changed the mindset of the salesforce that hovered around engineering (how SAP is built) to laying more emphasis on the needs of the customers. Then another major shift in business strategy was to move beyond (and not away) from the predominantly finance-centered side of SAP which seemed to Bill as focusing more on costs instead of growth. His success prompted the company to elevate him to be the co-CEO of SAP (global) – partnering a Dane by the name Jim Hagemann Snabe.

This duo envisioned one of the most revolutionary things to come out of – SAP HANA – the platform enabling in-memory computing. They didn’t just stop there: SAP was heralded into the new age business comprising mobile devices and cloud computing.

He was instrumental in driving home the philosophy as indeed the practice of SaaS (Software-as-a-Service) being a long term goal than a short-term objective. It didn’t require Bill much convincing to do with the board as one of the co-founders (Hasso Plattner, Chairman of the board of directors) believed in this philosophy and made sure Bill’s efforts to herald long-term growth were not impeded by anything.

And that is how Bill McDermott is helming SAP SE – the company employing about 80000 people, serving about 2,35,000 clients and a revenue of $21 billion.

Haven’t we heard it a zillion times as to how when the going gets tough, the tough get going? That is manifested beautifully in the life of McDermott. If you thought the struggles of his family during his childhood when things weren’t hopeless but were certainly very challenging and his coming out of it was in line with the saying (above) – hold on: It manifested yet again much later in his life when he is at the zenith of his professional career. This he did by way of overcoming the loss of an eye (his left one owing to a freak accident at his brother’s house) that almost threatened to derail his wonderful journey of leadership, success, vision, perseverance, and hard-work that conjured up a very inspiring entrepreneurial pursuit and rose from this apparently bloody blow – all the more determined and enriched (for he says it taught him a great lesson of life) -to be back to work, up and running within no time.

This is how he puts his travails after the mishap,"There is another way you get knocked down that I’ve got some insight into now. You will get your test. The question is what you do when you get it."