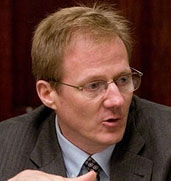 Being the scion of an erudite family can sometimes be very daunting to live with and even live up to. Not so much for John N. Little, who co-founded a company, The MathWorks, whose flagship product is MATLAB which is known to be used by about a million scientists across the globe - to be able to do what they want to do really well (innovations, discoveries, solutions, etc.). If you are wondering why something that has such an astonishing following and endorsement by some of the most brilliant minds on the planet does not have enough told about it in the world, then here’s why: simply because when it was conceived and developed by Cleve Moler (Co-authored by John Little) – the idea wasn’t to create a mass product.

If anything, it was the result of a super-genius’(Moler) quest to put to use his knowledge and express it to the community or audience that is likely to make the most out of it. That audience being, primarily, scientists and students (in later years), it didn’t warrant any PR activity at all. Word-of-mouth and the credibility of the co-founders did it for them.

Both of the founders have, till date, (barring the brief period when Moler had to work else as The MathWorks was too small to afford his pay, but he continued to support them during this phase, nonetheless) lived and breathed each day of their lives with The MathWorks.

If it was the ingenuity of Moler, the mathematics champ, then it surely was the enterprising self of Little that actually made MATLAB what it is today, a fact vindicated by Moler himself when he said “‘I am the father of MatLab, but Jack Little is the father of The MathWorks. He is the spirit and the brains behind the company. Little had academic training as a control engineer at MIT and Stanford so he knew the applications of matrices to control theory, which is still one of the main parts of our business – and I didn’t know anything about it. When the PC came out in 1982, Little figured that it could be used for technical computing. It was Little who started the company.”

So, what started with just the two MIT grads in the early ‘80s, has now become an organization that not only commands much respect from some of the most ignited minds on this planet (adopted by more than a million users, 5,000 universities and colleges., but also has been able to become and stay commercially viable as well as sustainable. The company today has around 3000+ employees working for it and it clocked revenues of close to a $billion (App. $893 M).

All this couldn’t have been possible, as Moler himself expressed, with the wonderful thorough-bred Jack Little.

Jack Little is the son of renowned MIT (Massachusetts Institute of Technology) professor, John D.C. Little, who is best known for Little’s Law – an operations research approach that he propounded. In fact, Jack’s father is also known to have earned the first Ph.D. in operations that was ever awarded in 1955. Not only that he is the founder of the concept called ‘Marketing Science’ which he put forth based on his study of humans and their buying behavior, besides starting a couple of companies.

It is only natural that with such an upbringing one would expect children in such environs to either grow sick of what the seniors do or like in the case of Jack, pick up inspiration from them and chart a path of success for themselves in due course. And so it was that, Jack Little completed his bachelor’s in electrical engineering from, where else, but the MIT from 1974-78 and then, as if that was not enough, he further went on to do his M.S. (Electrical Engineering) from the hot-bed of many great possibilities and that has so given many entrepreneurs of the modern world, Stanford University, which he did from 1978 - 1980.

Around the time he graduated from Stanford, a chance meeting with yet another of his ilk, Cleve Moler, determined the path for Jack for the rest of his life. Given that both were learned men with exemplary educational backgrounds, the two got along well and mostly delved into math and its application in science. It was their keen study of life in general and the life and work style of scientists and engineer that helped them in recognizing the need among this specific group of people for more powerful and productive computation environments beyond those provided by languages such as Fortran and C and, further, in putting to use their own expertise and experience in maths, computer science, and engineering, for developing a high-performance technical computing environment that they would call MATLAB (Short for Matrix Laboratory).

While Moler did the ground-work on the most effective application of matrices in scientific work – that was crux of the dev environment (MATLAB), Jack helped give it the much needed demand and utility angle propelled by the fact that MATLAB combines comprehensive math and graphics functions with a powerful high-level language.

The two men respected the fact that while their skills-set were distinct their capabilities were complementary. And it was this deep understanding of each other and their combined belief in the product / solution they had together built for better use, which has led to them being still at the company they co-founded more than three-and-a-half decades ago.

Moler had developed MatLab but it took flight after he joined hands with Jack. Moler’s objective in creating MatLab was simple – to enable students to use the LINPACK and EISPACK math libraries without having to write FORTRAN programs. Being the shrewd and visionary man he was, when Jack reckonedit is a powerful software with the potential to enable engineering, scientific, and technical applications on personal computers (which also happened to come around in 1982). Thus with that spurring the duo into putting together many such aspects, backed by their experience, they further developed it so that it can very effective. They worked on it for about 3 years after setting up The MathWorks in Boston (MA) around 1982. Once they were sure that it was ready to be used, whom did they sell it to?

You probably would have guessed that since it is a platform/solution aimed at scientists and engineers and since who better than an institution that has historically been one of the most fertile places for innovation, MIT which was also in the vicinity of the company (Cambridge, MA). If you did then you were bang on.

MIT was the company’s first customer to buy 10 copies of MatLab in 1985 and thus began the saga of great word-of-mouth publicity – the best and most credible form of marketing you can get for your offerings – and it was soon getting adopted by hundreds and thousands of scientists, engineers, and students across the globe it realizing their own potential to create great things – with the help of MATLAB.

That Jack and team had built something absolutely critical for the scientist fraternity was beyond any doubt. With that sense of satisfaction, Jack continued to make the company scale, attract the best talent, create further products and solutions, and generally stick on to the original purpose with which it was started (the guiding principle being that they reckon, feel, and dissipate the importance of maths as the cornerstone of all sciences) – all without going cut-throat commercial.

In fact, for all we know, it was MIT’s initial purchase of MATLAB and Jack’s as well as the company’s association with MIT that has lasted for so many years that helps to reinforce everybody’s faith and confidence in The MathWorks products - especially MATLAB.Asa Fellow of the IEEE and Trustee of the Massachusetts Technology Leadership Council, he writes and speaks about technical computing, Model-Based Design, entrepreneurship, and software industry issues.

Since MATLAB was intended at researchers, innovators, scientists, and students, Jack took a very bold decision of providing it to students for a subsidized price – which initially was resisted and feared by many as a potentially counter-productive move, as it could lead to piracy and opportunity cost besides, of course, denting into the confidence of regular licensed users who would feel kind of robbed. But, Jack was right in this case too, like he was always from the beginning, which was proven by the fact that the user community in general did let that happen as it ensured they used it responsibly. Hats-off to Jack’s vision of ensuring greater adoption as well as retaining the faith of existing users.