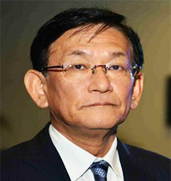 Mr. Kenichi Ayukawa is Treasurer at Society of Indian Automobile Manufacturers. Kenichi Ayukawa's management philosophy—a mix of Japanese and global practices—is helping Maruti Suzuki achieve unprecedented success. He was awarded ‘Best CEO – Multinational Company’ award at Forbes India Leadership Awards (FILA) 2016 in Mumbai. Kenichi Ayukawa was appointed as the MD and CEO of Maruti Suzuki India Limited to drive the company towards the ‘next phase of sustainable growth’ and to make ‘deep-rooted changes in the organization’. The Jury recognized his achievements as the CEO of the company which includes adaptability to change, vision for India, strategic approach and innovative thinking. He feels that sticking to the double digit growth path for the upcoming year is a tough challenge right now for the company.

Kenichi is a graduate in law from Osaka University, Ayukawa has been associated with Suzuki Motor Corporation for over three decades. He spearheaded operations for the Japanese auto major in Pakistan (2004) and has previously served as the treasurer of SMC’s American operations (1997). In 2008, he was appointed deputy executive general manager in charge of global marketing. He has also served as a director on the board of Maruti Suzuki.

Ayukawa, had earlier served in the US, Japan and Pakistan. He took over as MD & CEO of Maruti Suzuki in the year, 2013 and since then has contributed immensely to the growth of the company. In recent years, Maruti Suzuki has launched highly successful models like Baleno, Brezza, Ciaz, Celerio and S Cross. It has also redefined car buying experience and has attracted new categories of customers through its new channel, Nexa. For Ayukawa, Nexa is an investment for the future. “Through Nexa, we are challenging something that we have not done. We have a basic concept business, which is a small car, a middle-sized car. Nexa is (meant for) a little bit different kind of products which we want to supply. We want to check and recognize what is the customer expectation. Based on that information, we want to develop products not only in Nexa but also in the existing channels,” Ayukawa said.

Kenichi Ayukawa became chief executive officer of Maruti Suzuki India Ltd on 1 April 2013, when India’s largest carmaker hadn’t quite recovered from a horrific riot at its plant in Manesar, an industrial town in Haryana state near New Delhi. Suzuki Motor Corporation manufactures automobiles, motorcycles, and their related parts. The Company has production facilities in USA, Japan, Taiwan, India, Pakistan, Indonesia, Thailand, and Hungary. Kenichi Ayukawa has shown extraordinary skills and adaptability in driving the growth of Maruti Suzuki India Limited. Under his leadership, Maruti Suzuki has launched several successful models like Alto K10, Celerio, Wagon R Stingray and Ritz besides making immense contributions to improving India’s sanitation, quality of education and youths’ skill sets and employability. These acts show the diversity, value and selflessness of the company. Kenichi Ayukawa is a well – deserved recipient of the ‘Best CEO – Multinational Company’ award. His performance is extraordinary and we can only imagine how much further the company will grow under his leadership.

Ayukawa takes over at a time when a series of labour unrest over two years at MSIL’s facility in Manesar, Haryana, has wiped off nearly seven percentage points from the company’s share in passenger vehicle sales. Despite the success of new launches Ertiga, the sub-4 metre DZire and premium hatchback Swift, the company has been finding it tough to grow sales in the sluggish domestic market.

Nakanishi, who played a significant role in the formative years of Maruti Udyog Limited in the early 1980s, steered Maruti Suzuki for six years . He has served in various capacities including as chairman when Jagdish Khattar was the MD. He was appointed MD & CEO in Decmeber 2007. His tenure was extended in 2010 for three years.

He first came to be known in the 1990s, when the government and SMC waged a bruising battle for control of the joint venture company. Soon after the dispute was resolved, he retreated again into the shadows, only to emerge again towards the end of 2004, when misgivings gained ground between the two partners over fresh investments in the company. Nakanishi is not known to have taken credit for the resolutions, both of which saw Suzuki emerging stronger in the tie-up. He authored the new ‘Joint Venture Agreement’ between Suzuki and the government in early 2006.

The Turnaround at Maruti

The riot took a heavy toll on Maruti; the production halt hurt sales, taking its market share to 39% in 2012-13 from 45% in 2009-10 (it did make up for the one-month manufacturing halt by stepping up production in the remainder of the year). At its peak, the carmaker used to sell one of every two cars bought in India. Its operating profit margin plunged to 7.2% from 13.5%. Maruti shares fell to a 52-week low of Rs.1,047 in the immediate aftermath of the violence. Maruti’s image took a beating as well. Following the labour trouble, it was being widely perceived as a company with a hard-nosed and cost-focused management that cared little about workers’ welfare.

Kenichi Ayukawa says Maruti Suzuki has executive officers in the age group between 50 and 55 and needs to develop a new generation of leaders as that kind of a transformation is very important for the auto maker.

In three years under Ayukawa, Maruti Suzuki has bounced back, prompting the management to reward him with a two-year extension until 2018. At 47%, the carmaker’s market share is at its highest since 2000. Last year, it surpassed its parent in terms of market capitalization and sales, and exported a made-in-India car to Japan, a first.

In the meantime, Ayukawa’s efforts to communicate regularly with the workers seem to have paid off. There has been no significant labour strife under his leadership.

Maruti Suzuki has also taken up social initiatives in India on a larger scale. It had doubled its CSR spend last year. The company has contributed to rural health and sanitation in India. It has built sewer systems, household toilets and implemented new and efficient waste management processes. It is working to improve retention and learning levels in schools across India and also the infrastructure in India. It has also put in efforts to increase the skill development across the country, especially in the domain of driving skills to increase the employability of youths in the country besides making the roads of India safer.