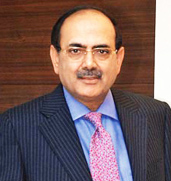 Romesh Sobti is an obedient son of an army officer, he enrolled for an engineering course in deference to his father’s wish. But after completing that, he opted for a career in banking, a choice that surprised many. After 35 years of dealing with intricacies of debit and credit, the astute banker now leads a promising new generation bank. Sobti was a very bright young man with a lot of energy, commitment and understanding.

The long winding career path, which began at State Bank of India in early 70s, wounds its way through multinational biggies like Standard Chartered Bank and ABN AMRO, before Sobti took over the reins at IndusIand in 2008.

He completed his Bachelors Degree (Honours) in Electrical Engineering and has also done his diploma in Corporate Laws and Practice and Secretarial Practice. As per his father’s wish, he would be a doctor or an engineer, so he became an engineer. But from engineering at least he had the freedom to go into banking, he didn’t stay in engineering even for a day. So that choice was his and the academic career choice was father’s.

If not banker he would have been a literature professor. Sobti is very fond follower of English literature probably because his father is an MA in English literature and he left all his books around, which Sobti read growing up through school and college. He did his masters while he was in service and was an army officer. He recalls that at the time of his generation, by and large parents decided what you would be.

with 35 years of banking experience in large state owned and multinational banks, including ANZ Grindlays Bank (now Standard Chartered Bank) and the State Bank of India. His last assignment has been with ABN Amro Bank as Executive Vice President - Country Executive, India and Head, UAE & Subcontinent. His responsibilities included consumer and commercial businesses in India, Pakistan and UAE support.

A large measure of the credit for its success goes to Romesh Sobti, 64, who took over as Managing Director and CEO in February 2008, moving from ABN Amro Bank which he then headed. He brought along the then top management team of ABN Amro as well, including Sumant Kathpalia, Suhail Chander, K.S. Sridhar and Ramesh Ganesan. Today, IndusInd Bank's capital adequacy ratio is a healthy 13.83 per cent (up from 11.91 per cent in March 2008) and non-performing assets (NPAs) a minuscule 0.33 per cent (down from 2.27 per cent six years back). Net interest margin is 3.71 per cent as against 1.37 per cent when Sobti took over.

When Romesh Sobti signed up to lead Hindujas' IndusInd Bank in 2008, not a single stock analyst thought it worth covering. Four years hence, more than 150 do. Goldman Sachs Group and JP Morgan have top ratings on it. Templeton, Vanguard and Blackstone are among stake owners. It was not just investors who had a dim view of the bank run by a family embroiled in the Bofors arms procurement scandal of the 80s, but even the regulator had given up hope terming it an 'outlier'.

Turning around the fortunes of a bank with four-month average liabilities versus four-year assets was, of course, a Herculean task for Sobti. Sobti, the son of an army officer, had done no extraordinary banking in his 33-year career. It didn't include billion-dollar deals or trading exotic derivatives.

Having worked in all the three spaces of banking (the public sector, private sector and the multinational) you really begin to appreciate where the three perspectives really come from. He got very solid and most valuable grounding at State bank of India where he worked earlier. Grass root banking, working in the rural areas that give you an appreciation of the fact that development banking is essential.

“It's been a satisfying journey, but there's no room for complacency because we have always believed that the future is better than the past. Nobody is resting on their laurels: we have had both tailwinds, and headwinds. We have been fortunate to ride the tailwinds and had the fortitude to fight the headwinds. The big takeaway is that if you have a well thought out and clear strategy and if you execute it properly, these sort of turnarounds are possible in any industry. “ Said Romesh Sobti.

In April 2011, IndusInd Bank also bought Deutsche Bank's credit card business. Currently, vehicle loans are down to 21 per cent of the total loan portfolio - 16 per cent on commercial vehicles, and five per cent car loans. In all, retail loans, much more diversified than before, comprise 45 per cent of the portfolio, corporate loans making up the rest. The latter is carefully diversified between large, mid-sized and small industries at 29 per cent, 17 per cent and 11 per cent, respectively. Sectors such as power, food and beverages, gems and jewellery and real estate have three per cent exposure each.

Thus IndusInd is one of the few banks where customers can choose the denomination of notes they get while withdrawing money at an ATM. It has introduced 'cash on mobile', which enables people to withdraw the money transferred to them without a debit card, by simply keying in a PIN number received over their mobiles. It has a 'quick redeem' scheme which allows credit card users to instantly redeem their points after making a purchase. It was the first to introduce video banking by which a customer can view bank officials while speaking to them. The effort is paying off - IndusInd Bank now has five million customers, getting 50,000 to 55,000 new ones a month against 4,000 to 5,000 five years ago.

Sobti is married and he has two children: a son and a daughter. His wife is a homemaker, his son is now 31 years old and he is not a banker. He is averse that he will never do this sort of management thing. He is a Masters in telecom engineering. He is pursuing his course of action in life according to the way he thinks he should go about it. The father has a very little influence except that the father has funded him in his studies. Sobti’s daughter is also similarly well educated, but she is into child education. So both the children are now in a way independent.

He feels that work-life balance can be achieved by really doing things, which you do passionately. So even if you are sitting at home working on certain things, you do it passionately. Time well spent creates the balance because you spent your time well whether it’s at home or at bank. You are balanced.