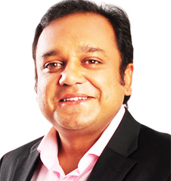 “Someday I want people to point to Subhashji and say, ‘That’s Punit Goenka’s father’. That’s my only goal in life. I want that recognition once.”This quote is actually the expression of a secret desire by one of the scions of the Essel Group, Punit Goenka, who helms the media and entertainment businesses of the group (his younger brother Amit Goenka is entrusted with overseeing the group’s non-media businesses).

After close to a decade of leading the Zee Entertainment Enterprises Limited (ZEEL) – he took over as CEO in 2008- we can safely predict that sooner rather than later, he may well realise that goal. Some evidence of the fact that he is moving in the right direction towards achieving that secret goal is this – He has lead ZEE in achieving a multitude of milestones and prestigious awards that have elevated the brand to that of a global player. Some of these include the Dun & Bradstreet Corporate Award (2015), IMC Fusion Award for Excellence in Media(2013), and Businessworld Infocom ICT Award (2012). Always with an eye on the future, and the razor-sharp business acumen that he inherited from his father, Zee has achieved global stature in the new media domain which is manifested in the expansion of the company's international presence across 169 countries, and its reach to close to a billion viewers.

Education and introduction to the family business

Punit Goenka, the eldest son of the highly successful entrepreneur-par-excellence, and chairman of the Essel Group, did his Bachelors of Commerce (B.Com.) from the Mumbai University in 1995.Admittedly, by the time he was ready to be inducted into the family business (out of choice, no one – not even his super-imposing father, forced him to enter the business), things were not even remotely close to being as adverse as they were for his father – who started his grain trading business in the Hissar town of Haryana (though he was born in Rajasthan, the family had moved to Haryana looking for greener business pastures) with a mere Rs.17 in his pocket (that’s less than a quarter dollar) and made it big with his shrewdness, superlative acumen, and vision.

However, he wasn’t straight-jacketed into a leadership role. Punit Goenka was groomed and mentored by his father to, eventually, helm the affairs of his media business.

Punit Goenka headed Zee Telefilms Ltd (1995 -1997) - a music division of ZEEL thatengaged in audio/video music album publication. Then he was tasked with running Dish TV (erstwhile ASC Enterprises Ltd.) where he served as its Vice President Operations (for 3 years since 1997).

After serving Dish TV (was a director there until 2007), he was brought into the group’s most successful and flagship company – Zee Entertainment Enterprises Ltd., as its Network Operating Officer in 2005 - where he also served as the Head of Zee TV & Cinema (part of ZEEL).One cannot find fault with anyone for being awestruck as well as feeling a bit intimidated by the super-successful Subhash Chandra, even if he is your father. So, when Punit realized he needed to take control of Zee TV’s day-to-days operations and the decisions thereof, he had to seize them from his father – albeit through a request. One can imagine his plight when he says how scary it was to go and express his ideas to his father.

It took him months to approach his father, after which he mustered enough courage to go and ask his father to let him take decisions for taking forward the media company. The senior, being the visionary, looked upon this as the coming of age of his eldest son and very whole-heartedly allowed him the freedom and confidence to take decisions.

Among all the things that the scion inherited from his, the one that has stood out and has served him and the company well has been his modus-operandi of creating consensus and then going with it.That means, apart from banking on his own capabilities, he also trusted the core-group that had also been with his father through the journey of the company’s journey as India’s first non-state-owned television company to becoming the $3 billion conglomerate that is into myriad of business from online gaming, news, television, infrastructure, etc.

Punit has been able keep the distinction of ZEEL from other media companies by exercising a vice-like grip on cost and focus on profits. What it has meant is that, inspite of the so many media companies eating into the pie of the Indian media business, Punit has been able to ward off competition where it matters the company most and keeping it well and truly in the race for achieving his father’s goal of taking ZEEL into the top-ten of global media houses.

It hasn’t been easy to say the least. Amidst sustained competition from both local as well as international media players, what would otherwise have spelt doom for so many others (as it has indeed been for some), Punit has very masterfully orchestrated the diversification of the company’s offerings into various other segments and sub-segments, ushering it into the digital age.

Along the way he has had to align and re-align the business model that had worked so well under his father, to meet the dynamics of a nation that has gone increasing digital with the onset of multiple service providers making it easy for the country-folk to consumer media content in so many ways that could not have been imagined during the company’s hey-days when his father helmed it.

Going digital and international through localization

While diversifying its offerings to meet the demands of anet-savvy audience was in-line with the trends, one of the key decisions ZEEL took under Punit’s leadership was to go international by offering Indian, particularly Bollywood content to the rest of the world – in their language. Something that was missed by the other leading industry players.

This worked really well and contributed greatly to the revenues of the company, so much so that ZEEL now aims to clock a major portion of its revenues through its international offerings.

Another shrewd strategy that Punit Goenka embarked upon that has helped ZEEL sustain its position on the domestic front has been to focus on regional audience – tying up with locals and creating and offering local content as opposed to the other players who seem (so far) to be content playing national. On the digital front, there’s a Netflix-like offering called Ditto TV – which offers video content (and the like) on a low-cost subscription basis – the business seeing some good traction so far.

No wonder then that many observers believe Punit to have transformed ZEEL it into a well-oiled and profitable business without ever compromising on quality. And why would he not - he is known to be an out-and-out people person and a go-getter who knows how to get the best out of his team. It seems that while the great new business ideas always come from Subhash Chandra – who is difficult to approach, it is Punit’s responsibility to bring enthusiasm into the business so as to implement those wonderful ideas of his father, which have (barring a couple) almost always worked.