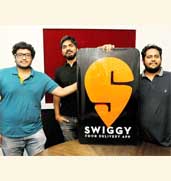 No matter what, deliver food from the best restaurants nearby, deliver food with no minimum guarantee required, and fast delivery: these are the guiding principles of one of the country’s leading food-tech companies – Swiggy. Add one more to that you’re your order pipe-line is clogged i.e. there are too many orders, then don’t take them. This has, so far, ensured that each order is delivered within 30 minutes – thus adhering to the main three at all times. And it has worked wonderfully well in this high-margin market.

The fact that in just two years since inception, it has had three rounds VC funding speaks a lot of the confidence of the investors in Swiggy’s business model and the vision of its co-founders, Nandan Reddy, Sriharsha Majety, Rahul Jaimani – who all have had their education from some of the premier institutions of the country (Sriharsha Majety – BITS Pilani & IIM Calcutta; Rahul Jaimani – IIT Kharagpur; Nandan Reddy – Bits Pilani).

A bit about the co-founders: Sriharsha, after schooling from Vijayawada, went on to complete his engineering (Master’s) from the prestigious Birla Institute of Technology & Sciences (BITS –Pilani) and them followed it up with a master in business management from the world renowned Indian Institute of Management (IIM –Calcutta or Kolkata as it is now known as). This son of businessman and a practicing doctor, he joined a company called Nomura Securities (working in its London office) after his MBA from IIM, with the thought that he would return to India after an year or so and set-up his own business. It ran in his blood, you see.

However before he could do, he had always been wishing to travel places and explore the world at a slow pace – on a bicycle. He did it alone – travelled many countries spanning three continents, partly on foot, partly, hitch-hiking, partly using local public transportation where conditions were trying.

After having travelled around many countries on his bicycle, made friends, understanding their cultures, and returning enriched with life’s experiences across the globe, it was time to go about his plans for setting up a business. It was time to give the entrepreneur in him the time to express himself fully.

He brought along his mate from BITS Pilani Nandan Reddy and the duo together started a service called – Bundl Technologies,basically a logistics aggregator for e-commerce companies. Probably they had miscalculated or the situation wasn’t right for that kind of a service, it didn’t take off like the founders wanted it to and it was shut down in June, 2014.

The two of them were down but not out. They knew that is initial set-back was only a stepping stone for harnessing their potential and making something new and different. After much deliberation they hit upon the idea of a hyperlocal delivery business. This was one area where they realized there were no players offering a complete food ordering and delivery service – that too location-based and quick.

This switch wasn’t anything new for Sriharsha who had switched between jobs as indeed his travel expedition where there was no specific route planned – as he himself reportedly said,“There was no route per se and in between, I took many de tours while visiting Portugal, Spain, France, Italy and Greece, ultimately pedaling through a distance of 3400 kms.”

They also realized that they need additional hands – driven as well as who shared the same vision as theirs and who were willing to go the distance with them, come what may. Thus they roped in Rahul Jaimini – an IIT-Kharagpur graduate who had already worked at a few tech start-ups by then and had done well. He had worked for NetApp with their Data Protection Group where he was responsible for developing, testing and maintaining storage products ensuring maximum data recovery in case of a disaster through intricate real-time replications. This was followed by a stint at Myntra (now part of Flipkart) where he was entrusted with leading development efforts for the strategy team in revenue/conversion boosting efforts. (He was opined that deliverables were always end-to-end in order to ensure that product roadmaps don't get affected on account of strategic enhancements).

This experience was to prove very handy when the BITS Pilani duo of Sriharsha and Nandan Reddy roped him in and started work on the platform. The company, Bundl Technologies was retained as the umbrella under which their hyperlocal delivery business would operate. They started building the platform which they called as Swiggy in August 2014.

The company was initially boot-strapped and it had to really work to make sure its business model and the customer takeaways were clearly understood by the target customers. So, the trio wanted to make sure their employees also shared their values and guiding principles so they themselves personally handpicked the initial staff (Sriharsha alone selected 50 of them).

This continued until April 2015 when they got their first investment from SAIF Partners and Accel Partners of #2 million. This was enough to help expand and improve the service. Then, in June of the same year, Norwest Venture Partners (NVP) pitched in with Series B funding of $16.5 million which proved to be the huge fillip required by Swiggy for scaling its operations or rather services beyond Bengaluru. With subsequent rounds of funding amounting to $75.5 M (that’s already clocking a valuation of about $300 M), the company was able to spread to various other cities – it is now providing services in eight Indian cities – Bengaluru, Gurgaon, Hyderabad, Delhi, Mumbai, Pune, Kolkata and Chennai with over 5,000 restaurants listed on its platform.

Based on the ground experience, Swiggy was continuously refined and even modified greatly to meet the myriad idiosyncrasies of the delivery personnel. In due course, it transformed into something that was very easily understood by the delivery team which now understands ever so easily as to where to pick the food from and where exactly to deliver the order.

Sriharsha, who is also the company’s CEO, and his team are reasonably confident that the time is not far when a restaurant’s online orders will outnumber its offline sales, especially in metropolitan cities like Bengaluru. That bodes well for them as currently only about 3% of the global food business is done online – while they are yet to penetrate in most regions of the country, the founders know they, more than any other contemporaries in the Indian market, are likely to get a greater share of the pie. It is vindicated by numbers and the fact that what Swiggy achieved in a mere 2 years is much more than some already established players such as FoodPanda and Zomato – although their business model is different from that of Swiggy.

Another aspect that differentiates Swiggy is that its business is very dinner-heavy. While this differentiation is good to talk about – like a good chunk of Indians who order food online during evening are more likely to go for Swiggy than other providers – the fact remains that a good amount if business remains untapped by not being active or popular during the day time.

Hence, looking to diversify the supply, the trio then came up with a novel program called Swiggy Express where food is curated by experts (gourmet) and also it is working on decreasing the delivery time to 20 minutes – that’s why Swiggy Express. To top it all, they are looking at the pricing as well so that combination of gourmet-food, really quick delivery at lowered prices can bring in the much-desired day-time sales which could act like a multiplier effect for the company.

Inspite of the fact that without any burn, Swiggy has been able to achieve 5x to 6x growth rate since its inception, the founders know that without much order activity during day-time, they are still a long way to skim the market, so to say. That is why Swiggy Express makes for sound business expansion as dinner orders, are by nature, very discretionary; whereas day-time orders (which are the business-hours orders making it imperative for the food to arrive in real quick time) – if the Swiggy Express model is successful – can be commoditized. Swiggy wants to be the go-to platform for customer wanting to order food – 365 days of the year and regardless of the working hours. That is when the idea of commoditizing Swiggy will become a reality for the awesome three-some from Bengaluru.