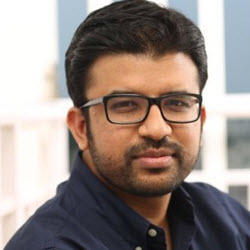 Shashank ND,the founder and CEO of Practo Technologies, India’s leading healthcare management app devised the application quotes by accident it is strange how certain incidents of occurrences in our lives figured that Spark or thought of innovation to come up with something really new and impactful for the society as a whole. It so happened that Shashank father had to undergo funny replacement surgery back in 2008 but Shashank wanted to get second opinion from a surgeon in the United States.

However there were no medical records online that could be shared with the US surgeon. This one incident that happened with Shashank sparked a new thought basically a view that how many others in this country faced this problem of not having online medical records. Then he started working on figuring out the solution for this and he realized it could be an online repository or an app or something which the doctors had to help themselves with and not be binding on the patience to do it because it would then be that much more cumbersome. So he came up with this idea and floated it around a few doctors in Bangalore the city where he was born and brought up. His takeaway from his father situation was that the world could use was digitized, accessible and shareable medical records.

But most of them did not approve of the idea saying it is not a plausible one. Shashank continued with his quest nonetheless. To make good of the idea, he needed hands for which he sought involvement from his college mate Abhinav Lal. When Shashank sounded him out, Lal was reluctant initially as they were still in the 3rd year of graduation and as also his parents did not approve of this proposition.

However Shashank cajoled and convinced him to eventually join the effort of creating something very new, exciting, and useful for the society. They started collected few lakhs from and started off coding at Shashank’s grand-parents’ house (unused) in JP Nagar (Bengaluru).But something like that required additional hands; so they invited coders who shared their vision, passion, and also had the ability to build applications on cloud. Within just a few days they were about 10 of them working to get this Software-as-a-Service (SaaS) platform ready – they initially called in turb-doc.in- which they did in just a matter of 14 days from starting coding.

Dissemination, adoption, and the early challenges

Monetization wasn’t on their minds when they started out, as the primary motive behind creating this platform was to serve the community, make sure they had easy access to healthcare information - all of it that they ever wanted to have before taking an informed decision.

For that to happen, it was the medicos i.e. the doctors and practitioners who needed to be equipped with the application – a solution that can store all the medical records on the history of patient’s medication, reports in anything and everything that related to the patients so this was a hard sell for the young engineers as the doctors whom they met were not so optimistic about something like that.

Then there were other operational and business challenges as well in the adoption of the platforms. The biggest one of them was that internet was in its nascent stages back then besides the fact that doctors were not very inclined on going to the web, much less about using smart phones in delivering care to their patients and recording the proceedings.

Slowly and surely, never pegged back by any limitation whatsoever and fueled by their desire and commitment towards the society, Shashank and Lal and the team of 10 geeks went about their job creating applications that helped the businesses - that is the medical centers, hospitals, doctors, diagnostic centers and, importantly, the patients. The software which was built to address the problems of patients in India, helped doctors upload and store medical records and prescriptions and manage billing and appointment details.

When they started off they never ever thought of how or why somebody should invest into their business. All they were worried about was how to make people use their platform effectively. They sold the products to doctors only on a referral basis which lead the business to just grow organically and they did not invest any major capital into it. It went on like that for a couple of years until 2010/11 when the Managing Director of a venture capital firm Sequoia Capital, ever so inadvertently, stumbles upon this service.

The gentleman had had a shoulder surgery and through the course of his post-surgical medication, realized that there was this app called Practo that was called into action a great number of times all through his recovery. This, kind of, amazed him a great deal and that very moment he could see that here was an application platform as a service that held great promise for both his venture capital firm as well as the community at large.

But he didn’t jump in with an investment blindly; he waited for another few months before finally getting in with a capital of $500,000 which was which was a very small investment compared with anything else the company had invested in its history.

With such capital infused into the business, the engineer duo went ahead expanding their areas of service first expanding to Chennai and then subsequently to other major cities of the country such as Hyderabad, Mumbai, Delhi, Kolkata, and Pune.

The team that had started with 10 people in a matter of 5 years grew to 500 and then the subsequent year and a half later grew to more than 2000. Practo is today India’s leading healthcare management platform besides being the world’s fourth largest subscribed health management application, next only to leading competitors such as Zocdoc and Guahao. The app was voted the best app at Google Think Mobile Conference 2014.

Where it stands today

Thanks to Shashank and his team’s relentless zest to serve humanity, the company is today valued at USD $500 million with further rounds of investment flowing in – in fact, chasing it from various quarters. Apart from Sequoia Capital which increased its investment, Practo secured funding from others funders that included Matrix Partners, Tencent Holdings, Sofina, Google Capital and Yuri Milner taking the total investment from various rounds of funding to about USD$125 million.

Not only that, the company’s operations areas of business today has2,500 employees working across 35 cities and six countries serving in more than 100 cities across 8 countries, with was about 230000 medical practitioners registered for IT services serving a patient base of about 4 million visitors every month. Experts and industry-watchers opine that Practo’s advantage over its competition lies in the fact that it is present in the B2B (management software) and B2C (doctor discovery platform) space, covering both ends of the health care ecosystem. Shashank says it has become the world’s largest appointment-booking platform with over 40 million appointments annually. It is present in four other countries too—Singapore, Brazil, Indonesia and Philippines—and is exploring entering newer markets in Latin America, Southeast Asia and the Middle East.

The quest to continuously improve and conform to their founding ideals, Shashank makes sure the company is still run like a start-up – which is hard to achieve after 7 years into operations and a valuation of half a billion dollars. So, what he says is, along with organic growth, they have embarked on an acquisition path that has seen them equip themselves with start-ups with complementary capabilities that add variety to their offerings – thus, helping them to function as start-ups. The app is now also available in 10 vernacular language of the country so as to support seamless communication for even non-English speaking patients.

Born to erudite parents who were employed with government departments and there was a set pattern for his life that they wanted him to achieve – so well in school, pursue engineering, and then get a good job. All of which he did: had his schooling from the National Public School, Rajajinagar and then completed his engineering from the National Institute of Technology (NIT), Surathkal, Karnataka.