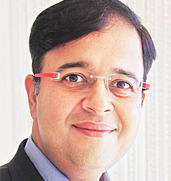 Umang Bedi’s leadership journey began early and, by age 29, he was heading a software company. He joined the Young Presidents’ Organization Bangalore Chapter in 2013 and was recognized as an “Under 40: India’s Hottest Business Leaders” by “The Economic Times” in 2014. Bedi will lead in building and maintaining strategic relationships with top clients and regional agencies in the country.

Bedi believes that the business world has a way of crowding out our personal lives. We lose sight of important aspects of what makes us human: integrity, the ability to form personal relationships, experiencing happiness and satisfaction in our careers.

The best and most successful leaders are those who genuinely understand the power of their human capital and invest in identifying, hiring, grooming and retaining talent .Steve Jobs with his amazing talent and resilience has always been an inspirational role model. His ability to fail and recover from it with greater successes never ceases to amaze me. He introduced his customers to experiences that were outside their realm of imagination and he did it using extremely sophisticated technology in deceptively simple packaging with mass appeal. There are so many aspects of his personality, drive and achievements that I continue to draw inspiration from. His legacy will continue to impact and inspire us for years to come.

Umang graduated from the University of Pune with a Bachelor of Engineering in Electronics in 1999 and he has done general management program from Harvard Business School.

This is how his career started and rises to leadership roles

His career started when he was in Grade 5, as a summer intern wherein he was a sales representative for AskMe Services. He credits his early start with strong work ethic today along with a genuine enjoyment and anticipation of the next business challenge.

Prior to Adobe, Umang worked for Intuit Inc. as the Managing Director – India and Emerging Markets, where he was responsible for leading the Global Business Division’s strategic expansion into emerging markets. Before Intuit, Umang was the Business Head of the Banking, Financial Services and IT verticals at Symantec India. In this role, he helped grow the business by over triple digits, year-on year. Umang has also held leadership roles at other organizations like Sun Microsystems and Wipro.

Umang was the Business Head of the Banking and Financial Services segment at Symantec India. In this role, he helped grow the FSI business by over triple digits, year on year, by leveraging strategic enterprise level agreements with key financial institutions. In recognition of his outstanding contributions to the company, prior to Symantec, Umang was with Sun Microsystems as the Country Solution Engagement Manager specializing in Telecom. During this period he was involved with the design and delivery of large telecom projects across Data Service Delivery Platforms, IPTV, OSS/BSS, Portal, Messaging and Identity Management. Umang has also worked with Wipro and Satyam Computer Services in the areas of Enterprise Software development and consulting in India and in the USA.

As managing director for Adobe, South Asia, Umang Bedi is responsible for strategy and business operations across the region spanning sales, marketing, strategic partnerships and services. He also is part of the leadership team in charge of growing Adobe’s Digital Marketing business across the globe. At Abode Bedi focused on government and education. In government Bedi sees three areas where Adobe can be an important player. These include; government to citizen engagement, two citizen portal’s and third is empowering education.

Bedi pushed Adobe’s cloud services in India by bringing the cost of its software including Adobe Photoshop to 500 per month under a pay-as-you-use model, instead of over 76,000 that it used to charge for a license, in 2011.

Umang has extensive experience in the IT Industry across diverse areas such as Sales, Consulting, Professional Services, Pre-Sales and Software Development. In addition, he is a member of the working group on "Network and Information Security Standards for e-Governance in India" under the Government of India's "National e-Governance Program (NeGP).

Mr. Umang Bedi has been Managing Director of India at Facebook, Inc. since July 2016.Before that he was the Managing Director of the South Asia region for Adobe. In this role, he is responsible for Adobe’s business operations that include growing the sales and marketing functions, driving strategic partnerships and alliances and driving cloud services opportunities within the enterprise, government, education and SMB sector in the South Asia region. In addition, Umang also leads partnerships globally with the Indian offshore system integrators, which are aimed at growing Adobe’s Digital Marketing business across the globe. Umang has a strong understanding of enterprises and their needs in an evolving creative and digital economy. He is driving the adoption and growth of Adobe Creative, Marketing and Document Clouds and helping customers transform their businesses in this digital, multiscreen and multichannel world by enabling them to make, manage, measure and monetize their digital content.

Bedi is also extremely well connected in the advertising and marketing world. His relationships with advertising agencies can help Facebook become a prominent advertising medium in the country, which in turn can significantly boost its India revenues. The second key agenda for him will be to rebuild Facebook’s brand image in the country. Facebook received a lot of negative publicity in recent days over its Free Basics offering wherein it partnered with Reliance Communications to offer data packs with free access to limited number of websites. Facebook faced the ire of the netizens and was forced to withdraw the offer after the regulator stepped in. Facebook has nearly 150 million users in India, and the only way to expand that base is by pushing into the rural market.

One step could be to bring Facebook payments to India and allow Facebook to become a large payments platform in the country, making it simpler for people in villages to get into the banking system.

Umang is based in Bangalore and while not at work he enjoys golf, photography, travel and exploration of new destinations with his wife and daughter.