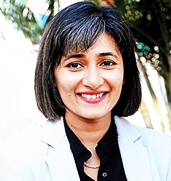 She is eldest daughter of Parle Agro founder, Prakash Chauhan. There are many aspects to why she is what she is today. It might be pretty difficult, even impossible (unless done by herself) to document every bit of her growth story. But, from what we know, we can safely say that she believes in trying and living the life one wants to (and see if it is really better on the other side), in starting young as the best way to get involved in a family business (she became a board member at 22 right after B-School), in learning something new every day as knowledge is wealth, in living each day as it’s one’s last (and living it to the fullest), in chasing one’s dreams (as it’s not going to happen the other way round), in focusing about the bigger picture and not worrying about small things in life, in forgiveness (as she feels it has the power to give one peace), in communicating instead of assuming (which is akin to making asses of all involved), in being you as you are (and not worry about what people who don’t accept that), in smiling, dressing up, feeling confident, and taking control!

And much more. That’s what she’s been doing for a decade or so since she assumed the CEO’s responsibility. In fact, Shauna Chauhan’s demeanor itself is a showcase of the kind of person and business leader she is. The bunch of strands of salt and pepper (grey) that she flaunts with aplomb saying she is what she is – something she inherited from her father and, therefore, doesn’t need to conceal or hide anything. It’s part of her persona. She revels in her mix of salt-and-pepper locks that add greatly to her disposition. Looks and the confidence that she exudes apart, what Schauna has done in since taking over as the top executive of Parle Agro is something that vindicates something that we all know but never admit – women are equally skilled and capable of the so-called things that running a successful business demand: vision, confidence, clarity of thought, leadership, and humility.

All of these qualities she picked up from her entrepreneur father and was inspired, in parts, by the umpteen leaders across the globe whom she looked up to – from Steve Jobs, Walt Disneyand Thomas Edison to her family members (grandmother, sisters) and evenher colleagues and friends who have worked from scratch and made something they believed in come true.

Her forebears had pretty much decided as to how the course of her life would traverse. Not that she was averse to it. In fact, they could do that because she concurred with their decisions. Being the scion of a successful business family with many illustrious family members (her father Prakash Chauhan being one), it was expected of Schauna to not only do well in academics but also assume the mantle of taking the business forward. But as things would have it, she was a very naughty kid who broke all the rules (for which her mother, who was on the board of the school, was summoned to the school Principal’s office). Then her grades (she admits) were not grade great either. If anything, they were so poor that her application for getting admitted into the same university as her father (had studied) was rejected. Of course, these turned out to be the very triggers that sparked in her the zeal to work that much harder and persevere to prove to herself what she was capable of.

She studied in Kodaikanal (Tamil Nadu) at the Kodaikanal International School. Then she completed a bachelor’s in international management (she was being groomed to be shoulder the responsibility of running the family business you see!) from the Franklin College, Lugano, Switzerland (University of Lausanne).

While some would argue that it is so very easy to achieve what Schauna has, if one is straight-jacketed into the family business, as then you would have the cushion of the family support. One perhaps can err a bit more than one otherwise would be allowed to, and perhaps even given umpteen more chances to recover from the tumbles one has had. But what one doesn’t see is that – not only her family but Schauna herself chose to be in the family business – a fact manifested in the subject choices she made very early on in her college life. That besides, right after she graduated she was inducted into the family business in 1999 but not in any leadership role. Instead, it was as a director which allowed her to work closely with her father to observe and understand the nitty-gritty of running a business (and a family-owned one at that). Her entry into the board-room also coincided with her father separating from his brother, and the company had sold Thums Up (to Coca-Cola) – their marquee brand which enjoyed a never-before or never-after brand equity of 52% in the country. So, those were not the best of times to be introduced to business.

Her father groomed her, as he did his other two daughters (Nadia and Alisha) for taking up responsibility of running the business together. All of them were groomed to be professional-leaders. That is because, often family businesses are affected owing to the rumblings inside the family which boil over to the company board room. Thus, Prakash Chauhan, having seen a bit of that with his family business (Schauna and siblings are the fourth generation entrepreneurs of the family) that split up to become three separate entities (the other two being Parle Products and Parle Bisleri), so he knew he had to inculcate the professional aspect of running a business (family-owned notwithstanding) in his daughters. She did not have a cabin, she sat with the other team members outside the cabins, so she could work with the teams, understand the functionality of each departments (she 2-3 month in each of them) so she could know the functioning inside-out.

She picked a great deal from her father besides being inspired and driven by the so many successful personalities in life who kept trying and trying every time they failed until they eventually succeeded – something that she took courage from when she was rejected by a college she wanted to join owing to poor grades at school, and made her determined enough to bounce back as high as she can, so that she was not a blot on her successful father’s biography.

Schauna was made the chief executive officer in 2006 and with that, the company turned a new leaf in its journey.Under Schauna’s visionary leadership and guidance, her unstinted hard-work, an innovative approach to creating a unique work environment within the company and honing a holistic work culture, have helped the group diversify from being only a beverage major to being a leader in both food and beverages. She's helped in the complete evolution of the new face and the reach of her brands by exponentially expanding the company's global presence, with exports to over 50 countries.

Any entrepreneur worth his salt will tell how difficult it would be to achieve what Schauna has – keeping in mind the business the company is in, where global Goliath’s (PepsiCo, ITC, Coke, etc.) are also competing fiercely to have a slice of the pie presented by the India growth story. But, being what she is, she decided that the company should look to get ahead of the competition but to get ahead of itself. With that philosophy driving her business decisions, she went about charting a success story, in the face of immense competition, like never before. Today she run’s the Rs.1,500 Crore company just like her father would aspired her to do: launching new products (confectionery, pure fruit juices and baked snacks), foraying further into global locations and taking on global F&B giants – in fact, the company’s international presence doubled (to 20 countries) in just 4 years after she took over as CEO.

It isn’t surprising that she could achieve so much given her style of working, her transparent leadership style, and emphasis on the team that she has built rather than herself as their boss, have all contributed to the super success of the company in each of their initiatives such as Appy Fizz, Frooti rebranding, entering into the foods market, and so on. Kudo to Schauna Chauhan Saluja.

She is married to actor &tennis player, Bikram Saluja and the couple have a son Jahaan (who still a toddler).