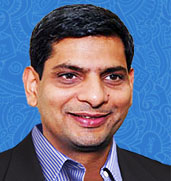 Manu Agarwal is a serial entrepreneur, technocrat, and visionary. All of it is manifested in the fact that he architected, founded, and pioneered the e-commerce base in India much before the world-wide-web had started to spread its legs in India. The revolution that we are witnessing in the Indian business environment propelled by the internet is something that people have caught on to only after it became reasonably tried and tested. But, Manu Agarwal, a true visionary, did this about almost a decade before the others picked up speed. The entrepreneur in him had expressed himself well and truly much before the Naaptol saga itself for which he is now well-known for.He founded three companies, helped them grow and lead them until they were acquired by bigger entities. A well-educated, thorough-bred like Manu Agarwal’s entry into the online marketplaces was anything but smooth. Imagine what it could be for under-trained, under-prepared, and ill-advised aspirants (who could learn much from his experiences). There were so many hiccups and obstacles through the early stages and in fact, the company faced problems throughout its journey so far. Inspite of all those, Agarwal has not only helped it stay afloat but anchored it to sustained growth and stability. In fact, it was reported that the company had broken-even a year ago.

Manu Agarwal did his engineering from the famed Indian Institute of Technology (IIT, Kanpur) and followed it up with a Master’s degree in Computer Science and Electrical Engineering from University of Minnesota.

Right after he finished his Master’s in 1994, he joined a company called Wafer Scale Integration (WSI) at Silicon Valley where he was entitled with the task of designing chips. As a Project Leader, his job profile included designing of flash memory chip and development of new generation row decoders and programmable logic devices.

After working almost for four years at WSI part of which (at the end of his stint) included setting up the company’s office in India (Powai, Mumbai), he set out to start his own business – something that he had always wanted to do.

It is said that unlike whose entrepreneurial pursuits may have been largely driven by success factors, money & stability, in Manu Agarwal’s case the factors were different (in the way he perceived them to be) such as intelligence (constantly challenged), learning (evolution) and power to some extent, all of which are not always possible in a job; even if they were, came with riders and limitations. So, we can understand why Manu Agarwal did what he did with so many companies and why he is always on the lookout for something enterprising, fresh, and challenging to take up and prove it as a success. That is precisely what drew him to found Naaptol after successfully helping the technology company he founded, ANMSoft Technologies Pvt. Ltd., to sustained growth and stability.

Coming to the first company he set-up – it was called Design Expo Network which was founded in 1998. With an initial investment of Rs.5 million from his own pocket plus some help from friends and family, the company was involved in designing websites and creating scalable email applications for B2B clients. As we know, online B2C was not even in explored much back then. In fact, even the online B2B model was a first for the country which later became the model one would employ for growth in an increasingly internet enabled business ecosystem in the country. The earliest clients of the company were the likes of Indiatimes.com and Mailmetoday.com.

The business received its first funding of Rs.25 million from Upstart Investors. With this, Agarwal now set about expanding the business to B2C as well. To further this cause, in 1999 he brought in his friend and batch-mate Amar Sinha and launched two subsidiary web portals of Design Expo called Criclive.com and Shubhyatra.com. Observers may remember this happened much before portals that came on these lines later such as cricinfo.com (bought by ESPS) and cricbuzz.com, Makemytrip, and so on. That’s one of the instances of his visionary nature.

One year later (although they weren’t making much money), the two portals were sold to Modi Entertainment Network.

Being the shrewd businessman he was, Manu realized that time was ripe to sell of Design Expo Network too. Accordingly, he sold it to a Canadian payment systems company called SLMsoft. Not only that, he helped them manage Bid Management as well as its India operations.

Then after a couple of years, around 2003, the entrepreneurial spirit in him began to tickle him a lot and, after ensuring that SLMsoft was stable enough and did not require his support and services, he founded another technology company called ANMsoft Technologies with an investment of Rs.10 million.

The company was an extension of his earlier ventures. It delved in providing e-solutions such as creating retails application, travel application with components such as booking and discovery of flights, hotels, and rentals – something that other start-ups followed and made success of.

That besides, the company also provided services such as development of e- Media applications which enabled services like online classifieds, collaborative content generation, publishing, subscription, and distribution, and building e-payment applications which could process loans and providereliable payment systems as well.

It was a success like his previous efforts. It was time for his next big move. Although Agarwal is still a Director of ANMsoft, he is not involved in its day-to-day operations and functioning.

Innovation is at the heart of any business establishment. In fact, innovation by one business entity drives or transforms the entire industry itself. Manu was seized of this too well and wanted to do that can reshape the functioning of many businesses.

He realized there was an opportunity in the home shopping sector as the internet was still underpenetrated in the country making it difficult for ecommerce companies to reach maximum target audience. So, he brought in two other businessmen Hari Trivedi and Yusuf Khan to start Naaptol – a broadcasting system that helped research and comparison based buying - with a seed capital of Rs. 5 million.

As a home shopping company, Naaptol providedhousewives, families, as well as small-time sellers and vendors in the country, a medium to buyers & sellers to purchase or sell numerous products in categories ranging from apparel, consumer electronics, mobile phones, home furnishings, furniture, kitchen appliances, and many more. Initially, it didn’t work. So, Agarwal had to infuse some much needed capital and as well as a fresh look at marketing (print and electronic media advertisements had a good share of the company’s budget besides availing the services of call-centres from Thane, Vikhroli and Navi Mumbai).

Additionally, he modelled it along Google search but there was no revenue model as Naaptol hadn’t been built to monetize as Google search was. But, he realized there had to be something more and came up with the idea of the ‘Hot Deals’ concept which subsequently evolved into a marketplace model. This was the turning point the both the company’s as well as Agarwal’s fortune. It clicked and how!By a combination of smart adverts, promotions, cold-calling, and hot deals, the company’s turnover rose to Rs.100 million by 2010.

Then it added another line of revenue generation through creating micro-sites for sellers where they could display their fares and sell as well through the payment applications created by Agarwal’s companies. In fact, it was a suitable for a hybrid model – people could search, finalize and buy online or just go to the store and buy- thus, giving these sellers the omni-channel sales avenues.

Over a period of time, Naaptol’s business model continued to evolve in variety and spread and currently it is a simple mix of advertisements (on Naaptol), offline lead revenues, online selling partnership, micro-sites for sellers - so it makes money by charging sellers for the leads it generates for them. Also it charges brands from advertising on the site.

By 2015 the company was registering a whopping a 60% Year-on-Year growth rate and clocking a revenue of Rs. 345 crores from orders worth about 4.5 cores every day.

There were challenges but all of which were overcome through the effective leadership of Manu Agarwal.