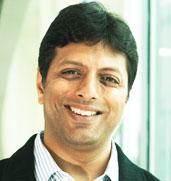 If you are one of the ‘Shadow’ team members – the eight technical advisors to Jeff Bezos, founder & CEO of Amazon – it’s a given that you must have been well blessed by the creator. For, to be able to gain the trust and confidence in your capabilities and wisdom from a man who’s himself one of the torch-bearers of modern entrepreneurship, you have to have it in you.

We are talking about Amit Agarwal, the Vice President and Country Head of Amazon India, who has spent almost all his working life (eighteen years to be precise) at the ecommerce and cloud computing giant. In fact, what we have seen him do here in India as the company’s head is not unexpected of him given what he was able to do elsewhere in the world (Spain & Italy). But, it is the circumstances in which the company was able to do all of it were more than demanding. The country’s size, scale of operations, competition, pricing (it’s almost a war out there), and investments required – all make it a cauldron.

Amit has captained the Amazon India ship to unprecedented success – India is the fastest growing of all the Amazon markets and continues to show robust growth despite all odds.

That more then 3/4th of all the business leaders hailing from India (either running their business successfully in the country itself or leading global business corporations) have their roots in the Indian Institute of Technology (IIT) in coincidental. Pretty much most successful entrepreneurs of the west have had their education from a handful of leading educational institutions such as the Massachusetts Institute of Technology (MIT), or the Stanford or Harvard Universities. In much the same manner or coincidence, Amit Agarwal too had his education from IIT (Delhi) as did so many of the other current business champions of the country such as Bipin Singh (Mobikwik), Abid Neemuchwala (Wipro), R. Radhakrishna (Hexaware), Dr. Anand Deshpande (Persistent Systems), Naveen Tewari (inModi), Arvind Uppal (Whirlpool of India), Deepender Goyal (Zomato), etc. Obviously, the premier technology institution of the country has something really unique going about it that it churns out so much finished talent.

When Agarwal joined Amazon in 1999 as a software developer it was not even a chip of the technology behemoth that it is today. Yes, Jeff Bezos had worked out the plan for it wonderfully well (on his way to Seattle from New York) starting off with the online book-store harnessing the power of internet technology. But, no one had imagined Bezos’ vision would be so expansive and all-consuming that today it has surpassed Walmart as the number one retail company (by market capitalization). Well, admittedly, Bezos himself the wizard forever, had seized the immense potential internet was to offer in the times to come and also that there needed to have a team of people who were equally capable of thinking like he did. That perhaps explains the ‘Shadow’ team’s existence and his reliance on it.

That Agarwal would eventually go on to be an integral part of this would happen much later in his association with Amazon. Along the way, he had to prove to the leader that he was all of that and much more – through a series of positions that extracted the best out of him and demonstrated his leadership qualities as well.

In just half-a-decade since he had joined the company as a software engineer, it had become evident that Amit Agarwal had done enough to gain the confidence of the management which didn’t wait longer to entrust him with more responsibility. He was made managing director of the company’s development center based of Bangalore (Bengaluru as it is now called as) in which position he worked for almost three years.

What Bezos saw in his performance as the M.D. of its India development center only he knows or perhaps to an extent Agarwal. But, whatever it was, it was enough to get a call up from the management to join the elite team of technical advisors to company’s founder, chairman, and CEO. So intriguingly named as the ‘Shadow’ – the team has just eight members (it would be an embarrassing abuse if it had been any more than that – since it is Bezos the visionary you’re talking about advising).

He was in the role for about two years after which he was again deemed fit for further capability testing. If Jeff Bezos entrusts you with something as important as international expansion, then it is a testimony to the fact that he trusts your caliber to undertake such crucial business activity. That is precisely what Amit Agarwal was asked to do in September 2009 after having worked in various other roles such as Director of Technology Amazon Web Services (AWS), Chief Product Officer, Datalog (AWS), etc.

Agarwal took over the responsibility of expanding Amazon’s foot-prints across the globe and did exceptionally well in countries like Italy & Spain. But the icing on the caking was to happen in India – his motherland.

When Amazon wanted to spread its wings in India – one of the world’s most progressive economies of recent times and which has even withstood the bloodbath of financial crises seen elsewhere – Amazon chose none other than the proven stalwart of its international expansion, Amit Agarwal. It made sense in every way – he had been there, done that and, to top it all – he belonged to this country and knew a thing or two about the life and the people.

Knowing the how things pan out in the life of an Indian is one thing and knowing the current pulse of a great cross-section of the population – a good chunk of which could be potential customers of Amazon- was quite another. However, Amit seemingly connected in a connected world, took to this challenge like a duck-to-water.

It was all scripted: At the time when Amazon was making its entry, there were already domestic and well established players in the ecommerce (market place) space. They didn’t just have a head-start over Amazon, they had perspective, experience, and above all, had mastered the logistics juggernaut – the fulcrum of all ecommerce in the country.

So what did he do?

Not that Amit Agarwal wasn’t seized of the situation – he knew it completely like the back of his hand. Being the master strategist he is, he set in motion some of the most off-beat strategies of market-entry and penetration – that pricing was only one of the differentiators in beyond any doubt.

So there had to be something uniquely different and effective: but anyone who’s been in the business knows that there’s no single formula that can just employed out of thin air. Faced with such odds, Agarwal devised a strategy – in fact a set of those and set in motion the plan to make Amazon a house-hold name in the ecommerce world of Indians.

If we look at it now, it would appear like very simple. But imagine doing all of it back then when the stakes were just too high (inspite of the fact that it was well funded, had tested many waters before coming to the Indian shores).

Zeroing in on logistics as the pain point Agarwal launched a service for sellers called Easy Ship. What Easy Ship did was to deliver products for sellers across the country covering a total of over 19,000 pin codes using Amazon Transportation Services, Blue Dart, and the country’s postal services department, India Post. This partnership worked really well – especially the last one – India Post that helped it reach the farthest and remotest corners of the country ever so easily. This resulted in Amazon India was able to service customers of 97% pin codes – making it the most penetrated e-commerce platform in India.

With the logistics challenge out of the way or at least addressed to a great extent, next up was how to bring on-board sellers across small and middle-tier cities and towns of the country. He turned dying or non-operational STD booths (pay per call public phone booths) into warehouses and their shop-keepers into sellers.

Then came the equally important aspect of penetrating the customer segments. He addressed this by introducing a concept called Udaan – basically a shop with television screens where the shop-owner would people in the locality it was housed place their orders online. This took care of small towns-folks who felt awkward to buy things online.

These are but only a few of the steps Amit Agarwal took to not only cement Amazon India place as the country’s top ecommerce portal (dislodging Flipkart) but it also meant that it was the fastest growing market for Amazon globally.

Thus, it’s no surprise that Agarwal’s return to headquarters in Seattle to resume ‘Shadow’ work were deferred at least until end of 2017, and was asked instead to continue with the good work at the India facility.