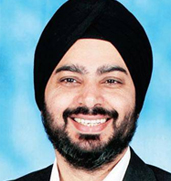 Bipin Preet Singh is a different lot from most of the entrepreneurs we may have heard or read about. There are reasons for that inference about him. To begin with, unlike quite good chunk of the entrepreneurs who essayed some leadership role or the other before assuming the top position, Bipin Singh is a self-made entrepreneur whose first leadership position entailed founding a novel start-up, and leading it form the front by doing every chore that the job demanded – from writing Java code, to customer support and marketing – he has worn many hats. How many CEO have we seen doing that?

Then comes his courage of conviction in technology – especially information and communication technology enabled by the internet. This is special because, for someone who touched a computer for the first time in his life only at the age of eighteen, that too at the computer center of the institute where he was pursuing his engineering, becoming an entrepreneur by 29 – in a mere decade – and that too in a field whose waters had only been sparingly tested. How cool is that?

Then comes the choice of business that he chose to start: all along his career up until he decided to take a plunge into the exciting yet big, bad world of business, he had been working on things that had to do more with hardware (semiconductors and stuff like that) than software platforms or applications. A brave decision indeed for you are virtually entering uncharted territory, where there could be so many unknowns and, because of your lack of exposure, you could be found wanting when it comes to deal with issues.

But, Singh would pay no heed to any of that for he is a visionary who is well and truly into the 8th year of his enterprising journey as a businessman after having worked in four different companies before that. And to think for all of that he is just 36 years

What’s more, he has already got many investors (Venture Capital funds, Investors) pitching in and taking forth his vision of enabling 100 million Indians to make their payments through the platform he created, which currently has, reportedly, 30 million registered users.

Many could be left marveling as to what is it about the IITs (Indian Institute of Technology) that produce so much productive talent, almost each of those going on to do something special or, at the very least, creating a sort of niche for themselves – which may not be directly pertinent to worldly ways but still making a difference. Perhaps, it’s the fact that when you are at the IIT, you know deep within that everyone else there is equally blessed with special talent if not more and hence, a strong sense of humility gets embedded into the self.

It is perhaps this very humility and, of course, the fact that you get to learn to live with the competition that makes you find ways to stay afloat in life at least, no matter what, if not excel in everything you do.

One other thing that it perhaps does is to make one learn find newer ways of dealing with issues and leading life.

That is precisely what was imbibed in Bipin Singh who did his engineering from IIT Delhi after finishing his schooling from the Modern School (New Delhi).

He joined Intel soon after graduating in 2002 where he was put on a white-field project – the company’s first server micro-processor design project that was done in Bangalore. Through the course of the three years that he worked with Intel, where he had started in a team of 30 that eventually grew to 500 in due course, he rose to the role of a senior design engineer and gained comprehensive hardware design experience that covered everything in chip design – from logic and circuit design and formal modeling to verification for a high end x86 server microprocessor.

Then being the different sort of person he was and still is, he joined a social service organization called Janaagraha (Bengaluru)as a training facilitator, and worked with a team of seniors on one of its initiatives that aimed at motivating people (most students and young IT professionals) to participate in the democratic process beyond voting.It response was very good and one of the students he trained went on to lead ‘Jaago Re’ - one of the most famous awareness campaigns the country had even witnessed.

Back to his chosen field…

After working with the very successful Janaagraha for about one year, it was time for Singh to switch back to what he had learnt to do – micro-processors. Accordingly, he joined NVIDIA – one of the leading manufacturer of semiconductors and worked there as a platform architect for about a year and a half (a tad shorter than that) before joining Freescale Semiconductor as system architect in May 2007.

While his role at NVIDIA saw him work with the company’s global architecture team of media and communications processors through the course of which he tuned a post-silicon high-end memory controller for performance and developed architecture for storage technologies like RAID and SATA/AHCI,Freescale entrusted him with working on multimedia and memory technologies for handheld devices with the main area of expertise being generating and analyzing performance models, developing new use-cases, and proposing new features for Motorola Chipsets.

This went on for about 2 years or so – which was also the period during which he was fairly disillusioned with the typical work-day – 9 -5 job, sedentary lifestyle, and basically relatively much less challenging and hence, less satisfying than he thought it should be.

So, one fine day, he decided to quit the job and become an entrepreneur himself.

Vision put into practice with precision

During the course of a 7-year period, the young Singh had seen enough of both the hardware side (which he knew inside out) and the internet revolution unfold in the country, as indeed the world over. It wasn’t surprising then that he perhaps had sensed the power of advanced hardware enabling software technologies especially the internet taking the world of business by storm as it would totally overturn the way people lived life – behaved, interacted, expected, sought and received services and paid for them.

In the midst of all of the cacophony, he saw a window of opportunity to start a business that treated itself differently.

He knew what his business would – he had a great amount of conviction into it. But, having worked at some of the world’s leading companies, he knew what kind of a challenge it would in getting a super skilled and highly driven team (he calls it A-Star team; Mind you ‘Team’ not ‘individuals’ he stresses).

To get this done, he sounded out many friends and acquaintances, and virtually everyone who he considered to be a lot smarter than himself. But all of those employed and doing well in their professional careers and, hence he sensed, did not have the courage to take a risk with their careers. He had suddenly hit an unexpected road-block.

Nonetheless, he didn’t relent and continued with his pursuit of the potential team members until he stumbled upon his flat-mate from his days in Bangalore. Thankfully for Singh, the old flat-mate immediately bought into his business idea and joined him. They together then got Sunali Aggarwal to join them as a partner and work on user experience part of it and likewise, the two of them both brought multiple people on-board each with a different skills-set - business skills, technical skills and usability – a complementary skill set that very few teams can boast of having at the start of their entrepreneurial journey.

Thus, they (along with Upasana Taku) founded Mobikwik in April 2009 in Gurgaon. Having done so much home-work, one would have expected Singh to build a very strong development team. But, he put a wrong foot there and chose, instead, to outsource the product development part – which was a cardinal sin. As things won’t work out the way you had envisioned them because outsiders wouldn’t know the concept like you do.

But, after the initial hiccups, he recouped and built an in-house team that did wonders. MobiKwik – India’s first mobile wallet that enabled its users (after adding funds to their MobiKwik account) to do any payment that they otherwise found to be cumbersome such as prepaid mobile recharge, or utilities bill payment, and just about anything.

It was not only the concept was new, their approach was also model – instead of the ‘push’ strategy, they adopt a pull strategy, wherein the quality of their services and the seamless payment experience would draw users to the platform to look for what s/he wants (pay for it). It has really caught on and kudos to the visionary leadership of Bipin Preet Singh, MobiKwikwon the mBillionth Award South Asia in the category of Mobile Business in 2014.