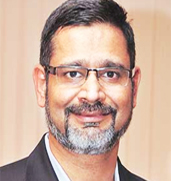 Mentored by Chandra (TCS chief Natarajan Chandrasekaran), touted by Azim Premji, and partnering with TKKurien, his predecessor, Abid Neemuchwala (who gets his surname by virtue of his native village, Neemuch, in the state of Madhya Pradesh, India), has everything to prove as the Chief Executive Officer (CEO) of India’s third largest IT exporter Wipro Technologies Limited.

Not that he hasn’t proved it before. He did and how: He lead the complete overhaul of Tata Consulting Services’ (TCS) BPO practice and brought to be among one of the major contributing divisions (responsible for over 12 per cent of revenues) of the country’s largest IT service company. That he did with the tutelage, support, & encouraging from the TCS boss Chandrasekaran.

But, here at Wipro, although he has adequate support and buy-in from company chairman, Azim Premji, and Kurien, things have not panned out as well as one would have thought they would – what with a proven hand taking over the reins of the top position. There are several factors for the apparent under-performance (perhaps only because Abid’s is being compared to one of his contemporaries, Vikas Sikka of Infosys who has turned a new leaf over and has not only sustained the success of the company under previous leaderships but also add a new chapter altogether).

Regardless of what is being said, there is no doubt that Neemuchwala is geared up – in fact, is reveling in this so called baptism by-fire with so many headwinds (especially the energy sector’s relative recession and instability witnessed over the last year and half and which continues to be unrelenting).

Abid Ali holds a Bachelor's degree in Engineering, Electronics, and Communication which he completed in 1990 from the National Institute of Technology (NIT), Raipur (Chhattisgarh – was earlier a part of Madhya Pradesh),and followed up with aMaster's degree in Industrial Management from fames Indian Institute of Technology (IIT, Mumbai) in 1992. That besides, Neemuchwala is also a certified software quality analyst and a Six Sigma Green Belt.

Abid Ali joined TCS in 1992 right after his Masters from IIT (Mumbai). During an association that lasted more than two decades (about 23 years), his career graph after showing the regular progression for the first decade or so during which he managed the GE account for TCS, really started to follow an almost hockey stick like curve in the mid to late 2000s leading up to his elevation as the global head of the company’s BPO arm.

While he had been very client-focused and actively engaged with clients across geographies and was, therefore, tasked by Chandrasekaran to lead the process excellence division in which also he delivered quite well for the management to think of assigning him new role and responsibilities, he was mentored by none other than the proven leader of the company, Natarajan Chandrasekaran for assuming greater responsibilities for the company, grooming him to take up leadership roles.

It what many would recognize and say, the apprentice of the company’s leader had truly grown and was prepared to take up extended leadership responsibilities.When he was made global head of BPS of TCS, One of the youngest executives heading verticals at the technology giant.

Not surprisingly, his working style, reportedly, is strikingly similar to that of Chandrasekaran. Not surprisingly, when TCS need to look for somebody to head the company’s business processing services practice, it didn’t have to look further than Neemuchwala.

He was made the Global Head of TCS’ BPS in early 2009.It is in this capacity that the apprentice rose to prove to the world what he was capable of. It is to be noted that the much talked about business process services contributed only about 6.9% at the time when Neemuchwala took over the reins of the practice.

He single-handedly turn it around to clock in a revenue for TCS of more than 12% (12.47%) from the BPS offerings, by bringing in so many changes. The most significant of it all was the greater automation of the BPO businesses. This obviously lead to improved performance, reduced costs, and quality delivery of services to the client – all conjuring up to usher in a revival of sorts to the practice which should have been done much better than what it was actually doing for the company before Neemuchwala decided to twist it a bit and change it for good.

What did this – apart from the spectacular numbers cited above, was it helped TCS’ BPO to gain some really good traction in Japan and the US Midwest. In fact, the revival happened in just a year since he was made the head of the business. By 2010 – the BPO service’s income had risen to almost 11% (Rs. 3,461 crores of the total company revenue Rs.30,000 crores).

So, as we can see, he was instrumental in increasing the revenues of the company through TCS e-Serve and expanding BPO operations across APAC. His efforts in charting a very highly successful BPS practice for the TCS attained its zenith by March 2013 – in a mere matter of four years since his elevation to the role, the BPO vertical accounted for almost 12.5% of the company’s total revenue of about Rs.63,000 crores. He sustained that level all through the remainder of his service at TCS i.e. until February 2015.

The switch to Wipro

This was something that was neither anticipated nor expected by anyone in the know of things at TCS but as with his performance as the head of BPS vertical, Abid surprised everyone including his boss and mentor, Chandrasekaran, by choosing to accept an offer from Wipro.

He joined Wipro as its Group President and Chief Operating Officer (CCO) in March 2015 and was tasked with spearheading several initiatives encompassing several services of the company such as Global Infrastructure Services, Business Application Services, Business Process Services, and Analytics with the aim of creating a more nimble and agile organization.

Neemuchwala delivered on all counts in this role and the measures he took helped in accelerating Wipro’s ability to respond to customers besides also ensuring deeper employee engagement.

These were reasons enough for the Wipro management and board to explore his suitability for the top position of the company which was then held by another proven hand, TKKurien. In fact, Azim Premji said this of Abid Ali Neemuchwala’s performance that lead to his elevation to the CEO post in February 2016 “In his 9 months as group president and COO, Abid has effortlessly assimilated into the culture and ethos of Wipro. The new structure will ensure smooth transition and will build on the solid foundation we have developed to drive superior growth and profitability."

All’s not rosy for Neemuchwala

Call it serendipity or destiny, but Abid Ali’s taking over the CEO responsibility of Wipro coincided with a very lean phase in the global energy and utility sectors, which make for a great chunk of the company’s business and have been traditionally its pillars of strength. The recession in the energy and utility sectors brought about by a globally sluggish demand in major consuming countries such as China coupled with the producers’ unwillingness to cut production, lead to a general reduction in discretionary spending.

This was already prevalent even as he was being made the CEO and it continued to dent into the company’s business and, ever so inadvertently, reflected poorly on Neemuchwala’s performance.

Nonetheless, neither sluggish energy segment nor the underlying weakness have broken the man’s resolve to take it to its rightful position. If anything, it has only strengthened so much that he wants make Wipro’s revenues to double in the next five years – something which many analysts, industry watchers, and investors even, feel as not only ambitious but audacious even. This has had its effect on the stock price of the company which took a beating but he is unmoved. He knows these are not going to change what the company if fundamentally good at doing – such as bringing in raw talent, training, grooming, and transforming them to be the ultimate professionals – about 150,000 of them currently. To be fair to him and Wipro, it is really very too early to infer on his performance. Nine is just too short a time for anyone to helm a company of such size and effect revivals, especially when there are forces that are not in your control. Here’s hoping that he will prove, yet again, to be the success he was at TCS for two decades.