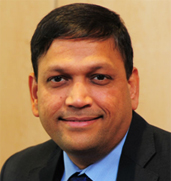 How does one qualify to be a successful entrepreneur? Or better still, a business leader who is a true visionary?

If you look at the career graph of Srikrishna, the current chief of Hexaware Technologies, it is amply sprinkled foresightedness, the ability to right call the future, and act in a view that is commensurate with the requirements of the future that s/he has foreseen. It is this visionary stuff that has helped all the companies he has worked with so far.

And, it was precisely that quality that stood out always – right from the keen eye that more often than not identified business opportunities ahead of competition, to his ability to engage all types of clients, and also in building organizationsthat were capable of sustained growth.

He has exemplified entrepreneurship in his own way – even when he was not in the driver’s seat. Like the two-decade long stint at HCL where there were other stalwarts (or even adversaries) vying and working hard for their share of the sunlight.

That he is very erudite is beyond any doubt. He is scholastic credentials will easily be matters of envy for thousands of first generation entrepreneurs as also of millions of aspirants. For, he did Bachelor of Technology in electrical engineering from the renowned Indian Institute of Technology (IIT, Chennai), and then topped it up with an MBA from the Indian Institute of Management (IIM, Calcutta or now Kolkata) – one of the premier business schools of the world.

It would be an understatement to say that but for stalwarts like Sandeep Kishore (now Zensar CEO & MD) and Srikrishna, HCL Technologies is today what it is – the best-of-class engineering services recognized globally by one and all.

The Srikrishna-HCL association or journey that lasted for almost 20 years began right after he came out of the famed B-School with flying colors. Obviously, he would be party to the many ups and downs that the company went through in the first decade of his job at the technology premier of the country.

He worked with all his skills, knowledge, and capacity and contributed to the overall growth of the company as did so many others.

If the first decade of his HCL journey went like a spates of small and somewhat bumpy yet fun rides, then he was in for a roller-coaster ride for the next ten years of his time in the company.

For sure he rose through the ranks – the company did well to recognize his capabilities and entrusting him with roles that required not only capability but also a great deal of leadership.

Although he was assigned many different roles earlier that demanded leadership, his real first sniff at such high profile roles was in 2006 when he was made Senior Vice President of HCL Technologies America.

This was akin to baptism by fire. Imagine you are on the cusp of leadership and what you asked to take is nothing short of gigantic. Spearheading a technology company – even with some hands at help – in America is nothing short of a sitting on a furnace full of over-heated rods.

But, Srikrishna was up to overcoming the apparent adversity. In fact, like true leaders and entrepreneurs, he rather considered it as a huge window of opportunity to help the company make headway into the land of dreams that had already mushroomed with a zillion other technology aspirants.

In doing so, he would also get to both - test as well as hone his leadership skills, as indeed everything else he had known he could do. That meant, the immense challenge facing him also presented him avenues to showcase to the world (apart from the company management) what he is capable of.

In the three years that he was in that role, he perhaps did more than he had done for the company in the preceding 10 years that he had been with it.So, on most counts, it was his this (plus the next one as EVP & Global head)HCL stint that extracted the best out of him (he would perhaps have been as effective if not more, had he been employed anywhere else). It can easily be inferred that his mettle was recognized much before he assumed a higher role or became the top executive of Hexaware when the World Economic Forum named him as Young Global Leader of the Year (2010).

Next up was his elevation to the post of President of two of HCL’s marquee businesses – The Life Sciences & Healthcare and the Infrastructure Services. In fact, he built the entire infrastructure services offering of the company - from scratch to a whopping $1.3-billion business. Meaning he almost single-handedly built in a mere matter of less than a year (9 months to be precise) what most would consider a Unicorn (in start-up parlance) of today.

On the other hand, he focused on building impactful solutions for insurance companies and the pharma industry when he was simultaneously leading the life-sciences and healthcare division (along with the infrastructure service).

One can safely say that the promoters or the top management of Hexaware Technologies – the medium sized yet a global provider of IT outsourcing solutions, did not have to look beyond the one year of Srikrishna work experience. For, what he did in almost two-decades at HCL was ever-so-easily overshadowed by what he had achieved in the last nine months there.

It was simply a well-informed decision based on solid proof of the quality of the man in verticals that were significant drivers of Hexaware’s business (more than one-fifth of it). Healthcare and insurance account for 15% of the company’s total revenue while it was 6% contribution from the infrastructure management services.

So, in the July of 2014, he was asked to take upon himself the responsibility of the then slightly tumbling company and take it forward in the right direction. He accepted the offer and joined them with a relatively short notice and took charge of the affairs of the company.

If anything had tested – we mean really tested Srikrishna (he is also known as Keech by his colleagues at HCL), then it was his initiation at Hexaware as indeed the next two years so far.

He has had to see the company through a spate of revenue dents such as sudden and unexplained downturn in the company’s clients business, visa and medical costs, ESOP, employee salary hikes (twice already in his tenure so far), and the Chennai floods that impacted not only project delivery but also some prospective business, the exact opportunity cost could perhaps never be arrived at.

Despite all those set-backs and faced with heavy odds in a constantly transforming market, Srikrishna has been able to hold the company together really well and is confident enough to aspire to outgrow the industry – which the company did so very comfortably.

What he has been able to hold onto is the excellent cash on books. With his proven and successful track record at HCL, it was only expected that he would embark on effective utilization of the cash lying in its coffers. He already has strategized the acquisition road-map for the company for now. Health-care and banking seem to be on his radar for acquisition in the near future.