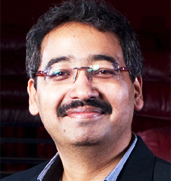 The story of Gautam Dutta, the chief executive of India’s leading cinema screening company, PVR, traversesthe path of a well-scripted Hindi movie – the not so exuberant precursor (education), followed by some small dabs (early job stints) at destiny, and as the tempo builds slowly, things unfurl (Lowe Lintas), to eventually taking one through all the drama (PVR bluO) leading up to a very climactic finale (PVR). Even there, like the umpteen successful movies that leave a thing or two for imagination right at the end, his ascent to the post of CEO of PVR leaves us wanting to know more about him as well as the company he heralded to unprecedented success and glory in the world of Indian movie screening.

When we said not so exuberant, it was meant to hint that he wasn’t your quintessential business leader hailing from the top tech colleges or B-schools of the world who have turned upside down so many things in corporate India. So, it is from such a perspective that it would seem like may be his educational pedigree is tad unknown compared to the others. That, however, is no attempt to undermine or demean his education, which is respectable enough. Dutta had his schooling from the Springdales School (Delhi) and then completed his bachelor’s in arts (Business/Corporate Communications) from the Delhi University in 1991.

The stint however was not as long as it would be with Lowe Lintas – another advertising pioneer in the country – where he got to showcase his qualities to the fullest. After about 4 years with Sista Saatchi & Saatchi, he joined Lowe Lintas in the summer of 1995. He would stay with the company for about 9 years until end of 2003 during which time he rose through the ranks to become its senior director for the company’s brand services.

The actual ascent of Gautam Dutta, one would say, began with Rediffusion DY&R – the ad agency founded by Arun Nanda, Ajit Balakrishnan and Mohammed Khan, which later came to be known as DY&R (Dentsu Inc & Young & Rubicam buying 20% stake each in 1994).

He joined the pioneering company in December of 2003 as Vice President-Brand Services and as its Delhi branch head and in the next two-and-half years that he was there, he would go on to lead the teams that planned and serviced the communication and PR needs of umpteen national level product and service brands including Xerox, Wonder Marble, Airtel, DLF, TDI, and GPI.

The next big step As we saw, it is actually here that his journey in leadership roles started and flourished.

That he was a pure marketer, was beyond any doubt. Having experienced a bit of leadership in his chosen field namely, advertising and corporate communications with the likes of Sista Saatchi & Saatchi, Lowe Lintas, and Rediffusion DY & R, Dutta was geared up to take his marketing forte to the next level.

He joined PVR as its Chief Marketing Officer in 2006 when the multiplex concept had just begun to catch-up with Indian cine-goers. PVR was on the cusp of a new journey in a country where stand-alone cinema halls had rules the roost for decades. In such a scenario, media sales were ripe to jump a notch or two with the concept of multiplexes.

That is precisely where the likes of experienced marketers with proven credentials come into the picture. Reportedly, the media sales of the company have grown multi-fold – from Rs.7 crores to a whopping Rs.200 crores as of now. In fact, it is also reported that the company’s media sales revenue (comprising of both on-screen & off-screen advertising) is more than the cumulative media sales revenue of all other cinema players in the country!

That’s because, along the way, he was instrumental in adding top brands to its accounts, advertising with prominent names such as GSK, Pepsi, Nestle, L’Oréal, BMW, Mercedes Benz, Hero, Microsoft, Hero, American Express, Citibank, Rado, Rolex and Vodafone, etc.

There are very few instances in the history of the corporate world where a CMO has risen to become the company’s chief executive. In that sense, Gautam Dutta stands out. When PVR started its retail entertainment venture called ‘PVR bluO’ (a joint venture with Thailand-based Major Cineplex Group) in 2009, it was Dutta who was entrusted with taking the company forward.

Then he was elevated to the top post at PVT limited – which is currently the largest cinema chain in India with a country-wide presence encompassing 121 cinemas and 553 screens that are spread across 47 cities & 18 states.

The role is different in that the company primarily relies on its service capabilities to augment the offerings of someone else. That means there is absolutely no room for any complacency, whatsoever. If anything, the company has got to be all the more aggressive.

While that being the nature of the business (of PVR), Dutta brings to the plate his immaculate marketing and business communication skills that empower his ideas which are driven by technology. Therefore, he has assumed the responsibility of overseeing the technology deployment, innovations, and company operations. He endeavours to ensure efficiency, quality, service and cost-effective management of resources of the company that facilitate in advancing the mission and objective of PVR Limited.

Not only that, as a business leader, Dutta has recognized the need to build internally the future leaders of the company – a not so easy thing do to. It becomes tougher if it’s in the retail entertainment space where the behavior, interaction, requirements, and expectations of customers (patrons) continually keep changing in sync with the technology advancements happening across the globe. Considering the dependence on technology and increasing usage of gadgets, the company decided to launch a mobile booking application for the benefit of its patrons.

Reportedly, the app uses on cutting-edge technology and design, helping customers book their tickets with just a few clicks of buttons on their mobile devices. That makes the lives of movie lovers and cine-goers much easier and faster.

All these initiatives prove the deft leadership of Dutta that has enabled PVR to become the leading entertainment company in India. It rakes in the maximum Hollywood & Bollywood movie collections in the country besides also doing well globally. In fact, the global numbers for PVR are quite encouraging:

- It has the highest cinema occupancy, food sales ratio & media revenue per seat

- It has the highest admissions per screen across the globe

Gautam Dutta is married with two children. He enjoys reading and watching movies in his leisure time.