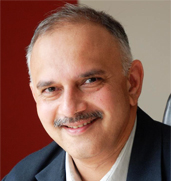 He left for the United States with determined to do something – anything but entrepreneurship. He was perhaps disillusioned by how his father had fared at it – for almost 32 years. But, destiny and a bit of smart PR activity lead to his self-discovery. It also debunked his earlier theory based on which he had dubbed his father’s entrepreneurial journey as not successful. More than anything else, what happened was, a doyen of the IT industry rose and shone like very few had done before (even after, perhaps).

We are talking about Dr. Anand Deshpande, the man responsible for Persistent Systems – right since inception (even conceptualization), to today – and turning it into a leading professional IT services company with a definite niche. The company today employs about 10000 people across offices throughout the globe, serving more than 300 customers, and generating a revenue of about $300 million.

No small feat for a company, or should we say, a man who didn’t want to venture in to business in the first place. And then, when he started out, he did so with a bare minimum capital (out his own tax refund), with a 350 sqft office in – not the sprouting IT hubs or business centers of India but – Pune, employing just six people.

In fact, he says, luck had a big hand in both his success and that of the company he founded.

Dr. Deshpande did his schooling from Campion School, Pune. Then, perhaps he had seized the state of his father’s not so great tryst with enterprise activity, he got admitted into the famed Indian Institute of Technology (IIT), Kharagpur in 1979 and did his bachelor’s in computer engineering, with an aim to pursue something different than what his father did.

The impact of what he perceived of his father’s business was that when completed graduation from IIT in 1984 – the same year he flew to the United State – even in those days (mid-80s) all road lead to the land of dream – to continue his academic pursuits. He completed his masters in his chosen subject – computer science, in 1986 from the Indiana University, Bloomington. He earned his Ph.D. (C.S.) from the same University (School of Informatics).

All he wanted was to equip himself with enough knowledge and skills through all his education and then put that to use.

As serendipitous as it can get…

Dr. Deshpande did not imagine, even in his wildest of dreams, about what was o ensue in the final year of his education journey in the US. During the last year of student visa, apparently, he had gotten into some good company.

It was a bunch of guys working in the IT industry who often talked about various things happening around in every field. It is during one such gossip sessions that Dr. Deshpande realized the potential of starting a company that specialized in outsourced product development services back home in India.

But before that, and right after graduating out of college, he joined Hewlett-Packard, Palo Alto, where he worked for about a year or so. Having got a sense of how IT-related businesses could be successful, Deshpande used his brief time at HP to build something that would really stand him in good stead the following year when he would start his own entrepreneurial journey.

He ensured that his time at HP was put to great use – both by getting to know the finer details of running IT and related businesses, and building relationships with customers and winning their trust and confidence, and generally being in their good books (so to say).

He had even sounded out many of the customers (wrote letters to almost 200 people)he had known before leaving for India to start his venture.In fact, some of them had even shown interest and further, committed to hire his (future) company’s services.

While that was some head-start, but there were things up ahead. Like so many of his ilk, he just had an idea – not many had really tried and therefore there was not go-to case-study or business scenario. It was only his analytical mind which zeroed-in on what could likely work.

Despite such uncertainty, in the September of 1990, he returned to India and set about putting life into his business idea. He used Rs. 2 lacs that he had received as tax refund (from the tax-deducted at source while he was working (at HP). Sensing that may not be enough to start, he sought out his father, who agreed to pitch in with Rs.1.6 lacs, and joined his son’s venture as co-founder.

The father-son duo started the outsourcing company called Persistent Technologies -in a small (only 350 sqft in area) rented office in Pune, with one computer and six employees- which got ready for business in a month.

This is where Dr. Deshpande used the connections he had established during his stint at HP. The company just started and hit the ground running with their first customer, O2 technologies, with whom he had worked before (as an HP associate).The first project worth $40,000 was to create a query process for O2.

As auspicious and wonderful a start as it was, the company soon (after just a quarter since starting out) ran out of running capital and they had broken the revenue generation seal with O2 until April 1991 as part of the deal. It had to borrow from banks to meet its day-to-day and employee salaries.

If he had found a way out of the financial struggles, the company faced challenges on the operating front to. One of the biggest was the level of infrastructure for an IT company – there were bandwidth issues, no phone connection (he could only get one for the company after six months owing to the government rules and practices) so client communication was not only premium but also very difficult.

One of the ways was to get out of the small office. Dr. Deshpande wanted to move his office to the Software technology Park (STP), Pune, set-up by the Govt. of Maharashtra. But, it was already filled out (or so he thought) and seemingly very difficult to get some space.

But, fortune favors the brave, persevering, and those possessed of a courage of conviction – which Dr. Deshpande had in ample measure.

One fine day in 1991 he wrote to the Secretary of the Telecom Department apprising him of the situation, who acted swiftly – just within a day receiving the letter, and ordered the authorities concerned to allot the company the requisite space.

There was no looking back after that. They also added Microsoft as a client which really acted as the pulpit for the company’s flight, and within half-a-decade, Dr.Deshpande took the company’s foray into other verticals too.

In the more than a decade or so of business, Dr. Deshpande had well and truly seized of what all is required to run businesses successfully – without any glitch. Geographic expansion – the company had spread its wings to more cities (Singapore, Tokyo, Toronto, The Netherlands, the UK, the US,Nagpur, Goa, Hyderabad and Bangalore), technological expansion - the company had by now even expanded technologically and ventured in product development and other technology services, and man-power had also increased accordingly.

The need to be continuously on the move so that the company is up to speed with everything that is happening in the technology and business world, Dr. Deshpande realized he had the bring in investment in order to expand, improve and grow.

Therefore, when the company was in a stable position and had earned enough goodwill, he decide to take it public and attract investment into it. Persistent got listed in 2010 (it became a limited company in 2007).

After having received the necessary in-flow of cash required to support the company’s expansion and growth plans, Dr. Deshpande set in motion what he had always known to be among the pillars of growth, capacity enhancement, and geographic foothold – mergers & acquisitions. He started with them in 2011 by acquiring the OPD business of Infrospectrum Inc., & its subsidiary,Infrospectrum India, followed by Openwave Systems – the cloud platform business of Doyenz, and then TNPM – the networking platform of IBM, and continued in the same vein until 2013 at a pace not matched by many.

With these acquisitions and mergers, Dr. Deshpande heralded the company into areas of specialty that allowed it to play niche. Despite such heavy investments, he made sure the company always had business growth and profitability (at an avg. 25 – 30 % YOY).

Dr. Deshpande is also involved in many philanthropic activities and the company earmarks some percentage of its annual profits towards developmental causes.