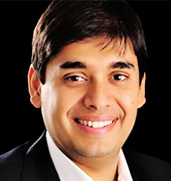 Being the scion of a very erudite family is one thing; emulating part of what your forebears did, too is common-place. What is different is to have the courage of conviction to be able to break away from family traditions and proving that you could be equally successful in life – by all the common yardsticks.

Naveen Tewari did just that – and in the process created the world’s leading mobile advertising company, which is potentially an acquisition target for the likes of Google, Facebook, etc.

In fact, it is one of the very few Indian star-ups that has revolutionized the advertising industry.

If one looks at Tewari’s lineage from the other side of the river, one would almost be envious of it.

Imagine this: Your entire family is into the country’s premier technical institution –the renowned Indian Institute of Technology (IIT) – professors all of them. His grandmother (a mathematician), was the first woman professor across IITs; his father (Shri Sachinand Tewari), was a Dean and Professor there, besides some of his uncles were professors there as well.

Therefore, living among IITians it would be criminal or almost blasphemous if you digressed from the proven path to success. He should not even think of anything else than IIT. It was in the air, mind, home, and away – everywhere. Rising up to the expectations of the family as indeed all others who mattered (and even those who didn’t matter) – was a herculean task. Simply because you have got to burn midnight’s oil to achieve that, besides the fact that there was no shirking away whatsoever.

After having passed out the Kendriya Vidyalaya, Tewari had to get an admission in the IIT, more than anything else to not render any damage to the scholastic fabric of the family. Apparently, his mom was very worried as to whether he will get through the entrance exams. Expectedly, she was very relieved when he broke the news of his rank out to her.

Now put yourself in Naveen Tewari’s shoes and experience the shackles. Would you still trade the freedom and opportunity to do what your heart and mind says for something like that? In Tewari’s case, he had no choice – although it was not imposed on him. There was too much at stake.

For good or for worse, he completed a degree in mechanical engineering from the famed institution in the year 2000.

One thing that needs to be we most often miss about IITs is that it is one place that has the capacity to humble you – not in the negative way. But, more from a progressive point of view. In that, you get to be in the company similar minded as well as people as smart as you are (quite often smarter, more intelligent and capable even that you think you’d find there).

This was the case too with Tewari as he came into contact with guys who would, in the future, share his views and, importantly, vision and align with him. They were Amit Gupta, Abhay Singhal, and Mohit Saxena.

He joined McKinsey and Co. in 2000 as a business analyst and worked there for the next three, getting to know the best practices, rubbing shoulders with the best that there were, and how it is works in the big, bad world of business. This was the perfect grooming ground for the some-what dissatisfied youth from a family of educationalists.

Having picked up precious insights from McKinsey and Co. Tewari realized the perfect way to break away from family tradition of being in the field of education, was to equip himself further with something that would help him in doing what he really wanted to.

It was business management education, which he pursued from the Harvard School of Business and completed in 2005. Even while he was doing that, he took up the role as an associate with Charles River Ventures – a venture capital firm primarily focused on early-stage investment in technology and new-media companies. He was responsible for the investments in technology across India and the U.S. besides chalking up the strategy for the company’s entry into India.

Having acquired the required education and know-how, it was time for Tewari to express the entrepreneur in him. He showed signs of those through founding a development organization called the India School fund (ISF) in early 2005.

The objective was to ensure effective delivery of community-based education in rural India that would help in breaking the vicious cycle of poverty rampant there. The modus operandi being educating the next generation of young people living in rural India to not only read, write, and count but also to see and evolve their environment driven by a spirit free of any constraint, and which is rich in its cultural diversity.

He continues to work closely with the organization even now.

Apparently, one fine day in the summer of 2007, Tewari called, Abhay Singhal, one of his batch-mate from IIT, to discuss an idea that was germinating in his mind for quite some time – perhaps all through his time at Charles River.

By the end of the day, the duo had made up their minds to work together on something. For that something to fructify, they also realized the need to bring in more like-minded and capable people. They didn’t require to look any further that their friends, Amit Gupta and Mohit Saxena.

The awesome, foursome from joined hands and moved to Mumbai – the hub of most business activity in the country, and started a service – actually an SMS-based search engine- called mkhoj.

It didn’t take-off like the friends had wished and there were a series of failures but they were convinced of their idea. They only needed to improvise or perk it up a little bit. That they did by the turn of the year since inception, by enhancing the search to have mobile advertisements and renaming it to ‘InMobi’.

The service was now giving both advertisers and mobile users alike a new option – to be relevant and find or see/buy only things or ads that fell in their areas of interest.

It was more or less as win-win situation for all. So, after the initial hiccups, InMobi picked up and in merely less than a decade’s time, has become the world’s largest independent mobile advertising platform. No small achievement for a service (and company) with relatively humble beginnings.

As the friends pursued entrepreneurship ever so sincerely, and as the promise of relevant mobile adverts started to yield results, InMobi kept attracting the interest of investors and vendors as well.

Being effectively different was the key to InMobi’s success

One of the reasons Tewari attributes to the platform’s super-success is that they didn’t try to copy what others did in the market. They stuck to their guns and always kept striving to find new ways to sustain amid the competition. You can expect that from a bunch of thoroughbreds, can’t we?

The company has a global presence with 17 offices