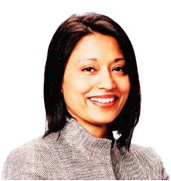 Being the daughter of a successful businessman may sometimes have its advantages in a country like India. For example getting an admission into a course at a famed educational institution would be relatively much simpler and hassle-free than for many others who don’t belong to such pedigree. But that wasn’t to be with Vinita Gupta – the current CEO of India’s third largest by generic drug manufacturing company & who also happens to be the daughter of the company’s founder & Chairman Desh Bandhu Gupta. Reportedly she didn’t have it so easy getting through to the J.L. Kellogg Graduate School of Management.

One of the reasons could be the fact that it wasn’t India and secondly it was a famed institution with many rules to follow and much at stake. She was almost denied entry for the MBA course she wanted to pursue because she was way too young – just on the periphery of 20 years. But the exuberance of her youth a never-say-die attitude and the spar – got the better of rules (so to say) and she got the opportunity to equip herself with the best that management education has to offer.That besides there were more and significant learnings for Gupta from her American vistas – especially those of long and growing alone and away from family. And importantly (in her own words) ‘it also helped her appreciate the little things in life that we so easily take for granted.’

There are so many aspects to Gupta’s rise on the Indian as indeed the global pharma scene as a visionary leader (which we will see later in this essay) which have helped Lupin – the only Indian pharma company with a substantial brands business in the United States while itscontemporaries / peers are still largely in the generics business. Under her able guidance and leadership the company has today become one of the largest pharma companiesin the world – with a marketcapitalization of about $14 billion USD and global revenues of about $2 billion USD. And her ambitions are not satiated yet as she aims to grow the company to a whopping $5 billion (sales) by 2018.

The MBA course in America was opted on the basis of building up her entrepreneurial ability to complement her bachelor’s degree in pharmacy – which was in line with the family business. She was born and brought up in Mumbai - the commercial capital of India. The Bachelor’s in Pharmacy from Mumbai University was just the stepping stone towards an entrepreneurial journey that would add feathers to the already successful business family – which had founded the company in 1968.

She joined Lupin Pharmaceuticals (Lupin’s US business headquartered in Baltimore, Maryland)in 1992 right after completing her MBA. This was her chance at making good of the opportunity to shine in the land of dreams. She soon too control of the unit’s functioning and oversaw building its infrastructure besides putting in place processes and systems that integrated the company’s teamin the US with the parent company (Mumbai). If these appear to be common place then she had a clincher for Lupin with the launch of Suprax – a pediatric anti-infective drug. It was not only the first overseas launch of a Lupin productin the US branded market but it also turned out to be the company’s flagship brand in the US. It was so hugely successful that it laid the stepping stone of the launch-pad for Gupta’s entrepreneurial flight. And she leveraged every opportunity that came her way in the US and propelled t to success with as much entrepreneurial spirit and zing as can be. The company got a firm foot-hold in the US pharma space with Suprax whose success was almost totally attributed to Gupta’s leadership. Make no mistake – all that was done with a lot of hard-workknowledge of the world she had come to now by living and growing along that made her to be independent and finding her way around difficult situations or obstacles.

On to Lupin Ltd.

Having proven her mettle with the company’s US business for two decades creating a strong presence in US-market with healthy product-portfolio by serving at its managing director until October 2003 and as its President until August 2010, she assumed responsibility of the parent company in September 2013. There was guidance and help from her father (founder of the company) besides support and encouragement from her young brother Nilesh Gupta (who is the managing director of Lupin Ltd.). Together the siblings have done so wonderfully well to take the company into the new century across the globe.

Of course, there’s her husband Brij Sharma (an entrepreneur in the BPO space) to give her immense moral support help and guidance. In fact he is her favorite sounding board. The couple met in one of the most happening places New York through friends.

Her enthusiasm, energy, and vision have taken the Lupin (named after a flower with curing capabilities) to the current highs it is experiencing: It is the third-largest Indian drug company; it is the only Asian company to figure in the list of top 10 largest and fastest-growing companies (by prescriptions) in the US, according to IMS Health, which tracks drug sales globally;7th Largest ; Topped the list of India’s Most Reputed Brands (Pharmaceuticals) – in a study conducted by BlueBytes (leading media Analytics firm).

Vinita Gupta – the eldest of Desh Bandhu Gupta’s five children and her younger brother Nilesh Gupta – conjured up strategies that would take the company to new heights - it is the only Asian company to be listed inthe top 10 largest and fastest-growing companies (by prescriptions) in the United States (According to IMS Health).

Under the siblings’ able leadership the company’s global aspirations have been realized through a spate of mergers and acquisitions. The acquisitive instinct in both the Gupta children is there for anyone to see.While the company had many acquisitions through its 50 year history most of them have happened recently 12 under Vinita’s leadership (5 of them n 2015).The best of them all being the acquisition of Gavis for a reported $880 (n 2015) – which is believed to be the biggest overseas acquisition by an Indian (Pharma) company.

Note only that her aggressive yet shrewd style of functioning has led to a sea change in the company’s fortunes overseas.Before her ascent to the top post, the company’s US & European business accounted for only 5% of global revenues. This has changed so drastically under Gupta that now the US alone contributes almost 45% of its total revenues (~$2 Bn USD)which s not surprising as 31 of its 77 products (n the US) are market leaders.

Gupta’s clarity of thought, speedy decision making and executional capabilities, and her approach of aggressive and direct marketing and brand acquisitions has meant that the company is also transforming from a predominantly generic company to a branded generics, specialty and complex generics-focused company which will propel it to a company with revenues to $5 billion by 2018 – a goal set by the Gupta siblings.

An indicative list of Lupin’s acquisitions under Gupta supervision:

Recognizing the need to unwind from a never ending and busy work schedule that requires her to travel extensively (more so with the business spreading across the globe) she makes it a point to spend as much time as possible with her family – through recreational activities such as biking at the waterfront with her son and quick getaways on her husband's boat or planning vacations together with her two sisters Anuja & Richa (who live in Chicago) and meet up as much as they can- are some of her favorite family activities or indulgences. Far enough one would think.