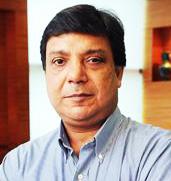 Life’s been a continuous learning for Arvind Uppal, the man who turned around the fortunes of company which was deeply in the read and was surviving just for the sake of it.We’ll look at how he was able to do it all a later in this write-up, for now though let’s look at some of the things that life and its happenings (vagaries for some) had taught him.

First things first, his education from the famed Indian Institute of Technology (IIT, Delhi) taught him humility, because (in his own words) “you could be very good in school and then you're thrown into a situation where everyone else is better than you." So, you respect that fact and learn to survive and manage in a competitive environment, and make good of it as well.

Then his almost two-decade long stint with Nestle was yet another huge learning for him, for learnt consumer focus to be the paramount aspect for any business. In fact, he learnt much more as well while working the international company on assignments in South-East Asia & Europe (China, Switzerland, & Vietnam) where owing to language barriers (and the fact that he didn’t do enough to learn the local language to be able to function better), he picked up a peculiar skill – that of understating people relying on their body language and expressions over and above what the translator would relate to him during interactions with local staff or people in each of the countries he worked.

Yet another learning – in fact a continuous one at that – comes from friends. While we all have friends and perhaps learn or know a few things from them, but Arvind Uppal’s friends are all much older than him and out of choice, because he is of the opinion that experience teaches scores of things that books of class-room teaching would not: and who has the experience – older or elderly friends with tons of hands-on and varied experience and much wisdom.

So, from every stage of his life and every aspect of it, Arvind Uppal seems to have picked up precious learnings that have not only helped him through difficult times professionally but have also propelled his career, especially in leadership roles, forward.

Uppal obtained his chemical engineering from IIT – Delhi. Then perhaps, with the foresight that he might one day be helming an enterprise, he did a Masters in Business Administration (MBA) course from the Faculty of Management Studies (FMS), New Delhi. And a little later while he was employed, to give his profile the international touch, he also attended a Program for Executive Development at I.M.D., Lausanne, Switzerland. So, we see that Arvind Uppal, as he has proved with each of his roles, has always made the treaded every path chosen with much vision and preparedness – qualities that have been amply demonstrated throughout his career so far.

The long haul with Nestle….much of Uppal’s charter-buster success with Whirlpool of India could be attributed to his extensive experience with Nestle where he was assigned to expatriate role and worked extensively in countries like Switzerland, China, and Vietnam.Realizing well over time that professional career isn’t all about left brain (engineering et al) and there are bound to be other pursuits too. So, he learnt very quickly to deal with people, and for the next about two decades, he did it well and how – he picked up the most invaluable point of all from this stint: customer focus! Regardless of nation, ethnicity, or language, what mattered to Uppal was things that matter most to consumers. That is precisely what he had followed while at Nestle and the rest of his career so far. But having not made enough effort to learn the languages, Uppal had to rely on his analytical and body language reading skills (like trying to read what one said through his or her eyes, people shuffling their feet, smile, etc.). All these stood him in good stead in all his international non-English speaking assignments.

One other thing that he learnt was building winning teams….putting together ‘a bunch of good people and making them do extraordinary things’.

Being the chemical engineer and extensive leadership roles and international experience, one would like to think, were the reasons for his selection to Whirlpool as it Managing Director in 2005. Or rather, should we say, the job picked him.

Why? Figure this: When he joined the company in February 2005, it was in shambles, so say the least. Being in the red is one thing and being-down-on-the-verge-of-out is quite another – which was what Uppal inferred when he stepped into the tricky role. In a hugely competitive space, Whirlpool had somehow managed to dwindle and find itself in the docks.

Employee morale was perhaps at its lowest – even the most optimistic ones would not give it a chance of survival, much less competing.

So it was, like they say, baptism by fire for Arvind Uppal. But, being the thorough-bred he was, Uppal knew that it was the people morale that needed to be repaired first and followed by cleansing their minds of the stigma (if any) and bringing them out of the multi-technology while they had gotten themselves into, and infuse into them a sense of specialty.

Making use of all the people expertise and experience he had gained prior to this huge assignment, Uppal was able to get things slowly back into shape.

He streamlined everything – products, people, perception, and positioning. Instead of going into multiple products that weren’t Whirlpool’s core strengths, he ordained that the company stick to its expertise and USP. Thus, he was able to drive home in both the employees and customers’ mind the fact that Whirlpool is a specialist of ‘something’ – rather than trying to be the jack of all. (These apparently was a constant thought running across the ranks of the company about how many categories its competitors were working in etc.).

That specialty it exhibited in refrigerators and washing machines (of course now it is also a leading player in micro-waves and air-conditioners too). In yet another deviation from common notion, Uppal has thoroughly driven home the point that the company is not after large pie of the market share (leaves it to be taken care of itself by the quality of the product) – rather the focus is on profits. So as long as that is taken care of, it doesn’t really matter that much what’s the company’s market share is, because, he knows that going that path is ridden with too many costs – primarily a dent into the bottom line.

Economies of scale perhaps have to take a back-seat for now with Uppal gunning for profits rather than market share. It has worked out well – no two ways about it.

The company under Uppal took a two-pronged approach: 1) Improving the product quality constantly (product refreshing cycle were brought down less than a year from the earlier once in three years) – so the customer confidence increased turning into greater adoption and sales, and 2) Bring down costs (which were helped by a fall in global commodity prices).

In just a decade, he had made Whirlpool rise like a phoenix – the company had rebounded to be one of the most profitable ones in recent years (in its segment).Profits have almost doubled from INR 123 crores in 2012 to INR 210 crores by 2015. In fact, the company became profitable in just two years after he assumed the responsibility as MD of Whirlpool of India – he attributes part of the reason to be a strong brand and a strong team. It is the 3rd largest consumer durables company in India in terms of revenues (with LG & Samsung being the leaders).

The success of Uppal made him the obvious choice to oversee Whirlpool’s operations in some other countries too – he heads the company in 18 countries.