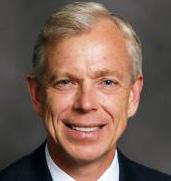 An engineering degree; a masters’ in business management;and starting off with a very hands-on job - that too in the U.S. Navy, lasting for six years which is a handsome amount of time for anyone to get the best learning from the military service; are but some details of the Lowell McAdam, the current chairman & chief executive officer of Verizon Communications Inc., the largest wireless company in the U.S., and a leading provider of wireless, fiber-optic and global Internet networks and services,which recently bought Yahoo!

Now for some inspiring and really thought-provoking details about the man who is one of the architects of today’s global wireless industry (in his own words), and who has the credit of having built the wireless industry on three continents!

Growing up in upstate New York, McAdam attended Cornell University (on a Naval ROTC Scholarship) from where he earned a Bachelor’s Degree in Engineering. Then he worked for the military for about half-a-decade for the U.S. Navy Civil Engineer Corps, and followed it up with a Master’s Degree in Business Administration from the University of San Diego.

Like most engineers, McAdam also loved the fact that he got a really hands-on job to begin his engineering career with. He started off with the U.S. Navy’s construction unit called as Seabees. The job entailed building equipment and other stuff as required by the department, thus became a licensed professional engineer in 1979. (In fact, one of the interesting but lesser known facts about his six-year stint with the Navy, is that he was part of the team that helped build the set for the Hollywood blockbuster ‘Top-Gun’ that starred Tom Cruise.)

Technological advancement for the betterment for the society in general (and, of course, the organizations he served in particular) had been the driving force for McAdam throughout his career. He was to make really good of all the education he had acquired, as indeed the precious 6-year stint with the Seabees of the U.S. Navy – which was as invaluable as it was necessary for McAdam to grow both as a professional as well as an engineer.

Into the corporate realm

McAdam stepped into the world of private industry for the first time through Pacific Bell in 1983. While it was meant to pursue a full-fledged career in engineering, he essayed many varied roles including executive positions such as Area Vice President of Bay Area Marketing and General Manager of South Bay customer services. In the ten years that he was with Pacific Bell, which was eventually acquired by AT&T, he helped the company pioneer wireless communication, around which an all-powerfuland revolutionary industry was beginning to take shape.McAdam was one surely one of the architects of this revolution.

The last decade of the 20th century saw him take up various roles in the communication industry beginning with Pacific Bell, followed by AirTouch Cellular, the wireless telephone provider (which was eventually acquired or became a part of Verizon – a company that McAdam would lead a decade-and-a-half later), joined in 1993-94 as its Executive Director of International Applications and Operations (as well as lead technical partner for cellular ventures in Spain, Portugal, Sweden, Italy, Korea and Japan).

Then McAdam had his first sniff at a leadership role with PrimeCo in the same year, right after his brief stint with AirTouch.His appointment as Chief Operating Officer and Executive Vice President (of PrimeCo)came in 1994 and through the course of the next three years leading up to 1997, he was responsible for overseeing the build, deployment and successful launch of the company’s customer service operations.

Then in 1997, he was further elevated to the post of president and CEO of PrimeCo Personal Communications, a joint venture owned by Bell Atlantic and Vodafone AirTouch, where he oversaw the deployment of one of the industry’s first all-digital networks up until 2000.

McAdam is truly a champion of the wireless communications industry. If one notices closely, he worked for companies that were shaping to bring about a revolutionary communication technology that would change forever our lives.

To be able to understand this, one has to follow some significant mergers & acquisitions that took place in fag end of the 20th century. Vodafone Group Plc merged with AirTouch Communications, creating Vodafone AirTouch Plc. In June 1999.

Then in the September of 1999, Bell Atlantic and Vodafone AirTouch had seized of the rumblings in the nascent wireless industry and, hence, agreed to merge their U.S. wireless operations (Bell Atlantic Mobile, AirTouch Cellular) to form Verizon Wireless.

This gave an opportunity for McAdam to realign with his pet subject, wireless communication. He joined Verizon Wireless in 2000 and served as its executive vice president and chief operating officer until 2007 when he became its chief executive officer, in which role he served for another three years until 2010.

His great track record for almost three decades made him the subject of much appreciation in the wireless and communications industries, which also include the 10 years at Verizon Wireless where he excelled, as expected. Thus, it wasn’t any surprise that he was as COO for Verizon Communications.

In just a year after taking over as the Chief Operating Officer and President of Verizon Communications, during which he was responsible for wireline and wireless operations, internal services and the technology management as indeed the Chief Information Officer functions, he had enough weight behind him to be elevated to the top post i.e. chief executive officer (in 2011).

Right after that in January 2012 he was also made the Chairman of the Board of Directors of Verizon Communications, a capacity which he is still serving.

Being the CEO of Verizon Communications is no easy job, especially in the era of the internet which has led to a transformation of business paradigm unseen or unheard of before. Competition is gigantic – Google, Apple, Facebook et al have redefined how people (customers) would want to make the best use of technology to enable them live a smart life.

This meant that McAdam also need to align Verizon Communications in line with the digital transformation happening elsewhere in the world, if not directly under its nose. Because, if it didn’t that would be a huge opportunity cost to pay. Well and truly seized of this, McAdam, whose job it is to herald the company to success in this digital era, decided it was high time the company diversified and venture into the other aspects of the technological sphere that were abuzz with a plethora of new things and concepts. Accordingly, He oversaw Verizon’s acquisition of AOL which also owned The Huffington Post and Tumblr – two very popular online players.

This was followed by the very recent much talked about mega acquisition of one of the pioneers of internet search, Yahoo! (For a reported $4.8 billion USD). By acquiring its internet business, Verizon was looking to create a level playing field in the internet space where Google & Facebook and other are leading the fray. Only time will tell whether or not these were the right acquisitions but one thing is sure – McAdam will leave no stone unturned to give Verizon what it deserve.

Apart from that, McAdam aims to expand Verizon’s horizons – which believes in the power of technology to solve the world's biggest challenges,by leadingits push into growth markets in the Internet of Things (IoT) and mobile entertainment realms.The push is not limited to only competing with the technology leaders. It has recently upped the ante withsome recent bids to acquire very diverse companies.